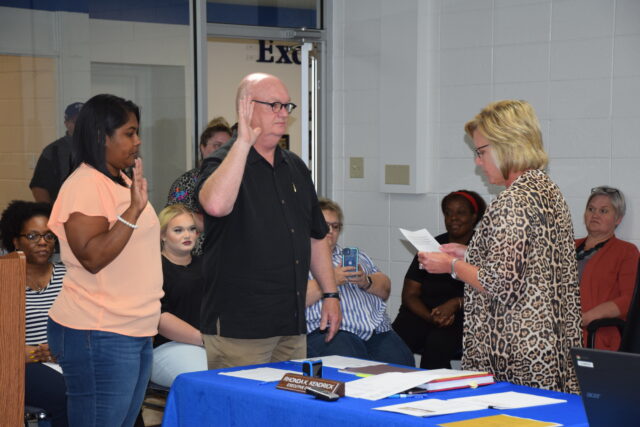 CROCKETT – The Crockett Independent School District Board of Trustees said goodbye to a long-serving board member while welcoming one new and one returning face to the board during a regular meeting held on Monday, May 23.

Once the meeting was gaveled to order by CISD Board President Dr. John Garner, the first order of business was to say farewell to trustee Josh Crabtree.

“Since this is a transition time,” Dr. Garner said, “we would like to ask Josh Crabtree to come forward. Josh has served on our board for nine years. Anyone who can serve on a thankless board like this deserves a lot of appreciation. We have a small plaque here that reads, ‘To honor your service to the Board of Education. Your guidance and direction as a board member have strengthened the bond between the community and the school. Joshua S. Crabtree, for outstanding leadership and dedication to the students and staff of Crockett Independent School District.’”

Once the applause subsided, Crabtree said, “It has been an honor. I want to thank the community. Y’all voted me here. I quickly realized you can’t make a lot of changes by yourself. You have to do what is best for the students and you can only do your best to do that. Just keep pushing for the kids. That’s what it’s all about. I appreciate this confidence and the time I have been able to serve this district, this community and it has been an honor to serve with all of you.”

The next order of business was the swearing in of newly elected board member TieAsia Tucker and re-elected board member Ansel Bradshaw. Executive Assistant Rhonda Kendrick administered the oath of office and once the two trustees were sworn-in, they took their seats at the board table.

As the meeting continued, CISD Superintendent John Emerich elaborated on several items in the consent agenda.

“As I have talked to you before, we have several of our lights at our football, baseball and softball stadiums that are in need of replacement at this time. When we look at the cost of doing that, along with the newer technology that is out there that could save us a significant amount of money, we are recommending replacing all of the lights at this time. We are going with LED lights instead of those that are there now,” he said.

Emerich said the district had received four bids and the district decided to go with the bid that came in at $401,000, which covered all fields.

He also commented the turf pellets on the football field needed replacement after three years of usage by the football and soccer teams, both for practice and for games.

“We now have to maintain a certain level of safety rating based on the actual padding of the field and the pellets are a big part of that. This is something that is necessary,” the superintendent said.

After the consent agenda items had been approved, Emerich reminded the trustees and those in attendance about the Ring of Honor nomination deadline of May 31.

Emerich next asked Asst. Supt. Brian Aiken to provide a presentation on what is known as the Teacher Incentive Allotment.

“We are in a challenging place right now across the nation in trying to recruit teachers and retain teachers in the profession. Crockett is no exception to that. We have put together multiple avenues to try to recruit and retain teachers. One of those strategies is to participate in what is known as a Teacher Incentive Allotment (TIA),” he said.

Aiken said this was a product of Texas House Bill 3 with a goal to attract and retain quality teachers in hard-to-staff schools.

“Since Crockett is considered a rural district with high poverty, we are considered by the state to be one of those districts,” he said.

According to the TEA website, “HB 3 established the Teacher Incentive Allotment (TIA) to recognize effective teachers on three different levels: Recognized, Exemplary and Master. These teacher designations generate additional teacher-focused allotment funding for districts in order for them to reward their top performers.

The website continued. “Teachers earn designations through two different routes. First, National Board-Certified teachers are eligible to earn a Recognized designation. Second, districts may designate their effective teachers when they are approved for a local teacher designation system. The approval process is multi-step and includes the submission of a system application to the Texas Education Agency (TEA) and then a data validation process through Texas Tech University.”

Following the TIA presentation, an agenda item concerning a resolution convening the School Health Advisory Council (SHAC) in order to develop recommendations regarding educating students in human sexuality was discussed.

“The state has required that we have some type of curriculum in place to teach human sexuality. The state did not mandate what that curriculum is but left that to be a local decision. That is to happen through our SHAC. They are to look at the different options and come back to make a recommendation to the board. The first step in that process is for you guys to pass a resolution convening them to do that very task,” Emerich said.

The resolution to convene the SHAC was unanimously approved.

In other matters brought before the Board of Trustees: