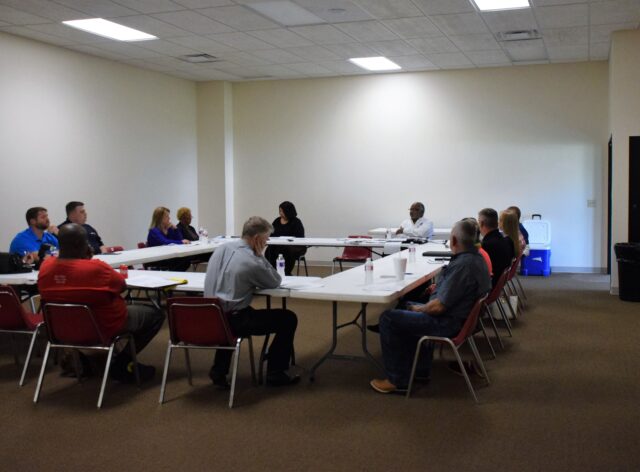 CROCKETT – The Crockett Economic and Industrial Development Corporation took action on Thursday, May 13 to rectify issues uncovered in an outside audit conducted by the city of Crockett’s outside auditing firm of Axley & Rode, LLP.

Specifically, Abele attached a letter to the city’s audit which stated:

• Blank Check Stock – Economic Development Corporation: It was determined that signed blank checks are received in advance of check processing. There is a risk (that) disbursement are not properly authorized and the board is not fulfilling its fiduciary responsibility. We recommend checks be prepared prior to signature for proper approval and implementing multiple check signers to ensure availability of signers.

• Unauthorized Payment – Economic Development Corporation: There was no written authorization for the Executive Director’s incentive pay. In addition, this payment did not go through normal payroll process. As a result, no retirement or payroll taxes were paid on the incentive, nor was a 1099 prepared by the Corporation. We recommend proper authorization for rate increases and incentives be formally documented and all pay be processed through payroll.

A joint meeting between the city council and CEIDC Board of Directors was held on April 23 to address the issues with the CEIDC agreeing to take action on the matters during their next regularly scheduled board meeting, held this past Thursday.

While tensions ran high at points during the meeting, the CEIDC Board tabled a motion to appoint a bookkeeper until CEIDC Executive Director James Gentry could find out more information about the cost and what services the bookkeeper would provide.

Abele, who was present at the May 13 meeting, explained her firm could provide the bookkeeping service but would have to recuse itself from auditing duties. After several minutes of discussion, it was decided to keep Axley & Rode as the city’s and CEIDC’s auditing firm, while finding a different outside bookkeeper.

Concerning the blank checks, it had previously been explained the signing of the blank checks occurred because of the difficulty of finding a second signatory when needed. The board decided to amend the CEIDC bylaws to allow any CEIDC board member, in addition to the executive director, to sign the checks, with a two-signature requirement.

In addition, the CEIDC board approved the submission of 1099 forms to the IRS by Axley & Rode for the executive director and any other vendors affected by unauthorized payments.

Prior to the discussion on corrective actions, area resident Kim Spellman addressed the board during the public comments portion of the meeting.

“I sent (CEIDC Executive Assistant) Mrs. (Carolyn) McKnight an e-mail earlier today. I would like to understand the requirements, qualifications and eligibility to be a board member, I might have an interest in that,” she said.

“Secondly,” she continued, “I would like to bring to light that there has been a lot of commotion in the last couple of weeks in large part about confusion over racism. Inclusion is a real important piece in our world today, with everything that goes on with COVID. So, boycotting a business that I own, saying I’m a racist and specifically thinking this is a personal attack on you, Mr. Gentry, is not the case at all.”

Spellman was referring to several posts on Facebook where she commented about the CEIDC audit. In response to her comments, several individuals implied her comments were racially motivated and proposed a boycott of her business, Mimsy’s Craft Barbecue, LLC.

“My interest is solely in ensuring a board structure has a good governance model and a foundation that is repeatable and can be upheld. I want to make it really clear there is no racism. In my family, as a Hispanic female and as a professional – that’s not the case. I would appreciate it if that was squashed,” she said.

“I know there was a (Facebook) from someone in your (James Gentry’s) family who had information from when Chuck (her husband) and I came to the board several years ago with our business plan and that person had information about our business plan where it is clearly stated when we offered our business plan it was confidential. It was a strategy and that it should not to be shared. I don’t know how that person would have that kind of information when they weren’t at this meeting. They would have had to have been talked to, outside of that. Just things like that. We have to be careful. We are a small town and people can chatter a lot. We want to dispel all of that stuff. From my heart of hearts, I’m going to say I’m not a racist, but I am a professional business woman that likes to see structure, governance and clarity of where people are going,” Spellman said.

With no further public comments, the CEIDC board moved into the actionable part of the meeting.