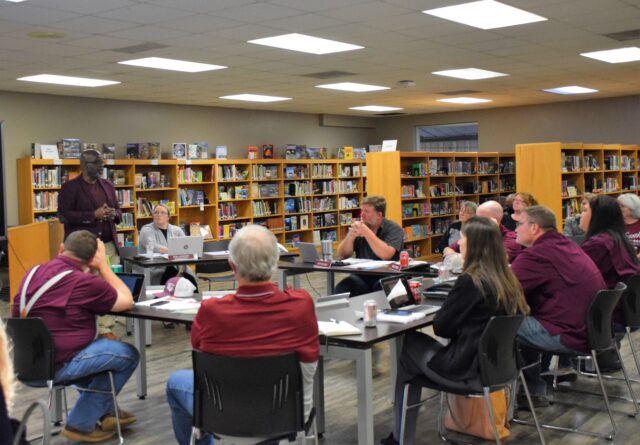 Appointments, Resignations Accepted by Board

GRAPELAND – The Grapeland Independent School District Board of Trustees met in a regularly scheduled meeting on Monday, March 28.

As the meeting got underway, Superintendent Don Jackson expressed his appreciation to all those who had helped the district through a very trying time after the untimely passing of a high school student.

“Any time you lose a student it is devastating. It is devastating to lose a child. With that being said, if there is anything we can do better, that is what we will do to take care of it,” he said.

“We can’t be everywhere at all times,” he continued, “but we can have open ears and open hearts for our students. We want every child to feel like they do have someone they can talk to. They have said you only need one significant adult in your life to make a difference. We want to be that one, somewhere in this school district.”

Changing gears, Jackson said the recent UIL realignment had been challenged but said the district before Grapeland “… had a bigger problem. They had a one-way trip that was like five hours. When we came in front of them with our two-hour trip, they just basically laughed.”

The next topic addressed by the superintendent concerned hiring more staff. Jackson said he would like to see the district lower the student/teacher ratio and added the Junior High and High School would now be separated.

“We are also hiring an associate principal who would only focus on discipline, with no other jobs. That is going to be a bonus, also,” he said. “I’m not pointing a finger at anyone. All we know ids the data we have and the data says we need to improve in some areas and we are working towards that. What do we want to focus on? Mental health, discipline and instructional leadership. We feel like we have a good model going forward.”

Jackson explained the district would be actively recruiting the best personnel possible at a time when people were running from public education.

Along the personnel lines, the superintendent reported Channin Spisak had been named as the Junior High Principal while Kristi Bell has been named as the Director of Curriculum and Instruction. Jackson also said Zeke Green had been hired as the Head Girls’ Basketball Coach.

Another topic addressed by the superintendent concerned the possibility of turf fields in the district.

“When we go to our new district, you’re going to see there is a big difference between their facilities and ours. Wait until next year when you go and see the Timpsons and the Joaquins and the San Augustines of the world and what they have as 2A school districts. He (AD Jordan Wood) is pretty progressive and he would like see us improve our stadiums, not just football, but baseball and softball as well. I guess where I’m going is turf fields. Before you make a judgement, go with us on some of these games next year. They are making it available for more people now because you don’t have to pay for it all at one time. It’s like a car you make payments on. A lot bigger payments, but … listen we could do this. I’m not talking about a bond. I’m talking about the fund balance we have. Yes, we want education to be first and a big thank you to the board for spending money on educators first. We are getting more staff,” Jackson said.

The superintendent added Coach Wood was in the process of putting together a presentation on the matter to bring before the GISD board.

Before moving on to the actionable items portion of the agenda, Jackson expressed his appreciation and gratitude towards Sherri Kendrick who, he said, would be retiring after 39 years in education, with 28 of those years in Grapeland.

He also gave special recognition to former GHS alum Trenia Tillis Hoard who led the Sandiettes to a State Championship in basketball during the 1989 season and recently led the Tyler Junior College Lady Apaches to the National Junior College National Championship in basketball. She was also named as the NJCAA Div. I Women’s Basketball Coach of the Year.