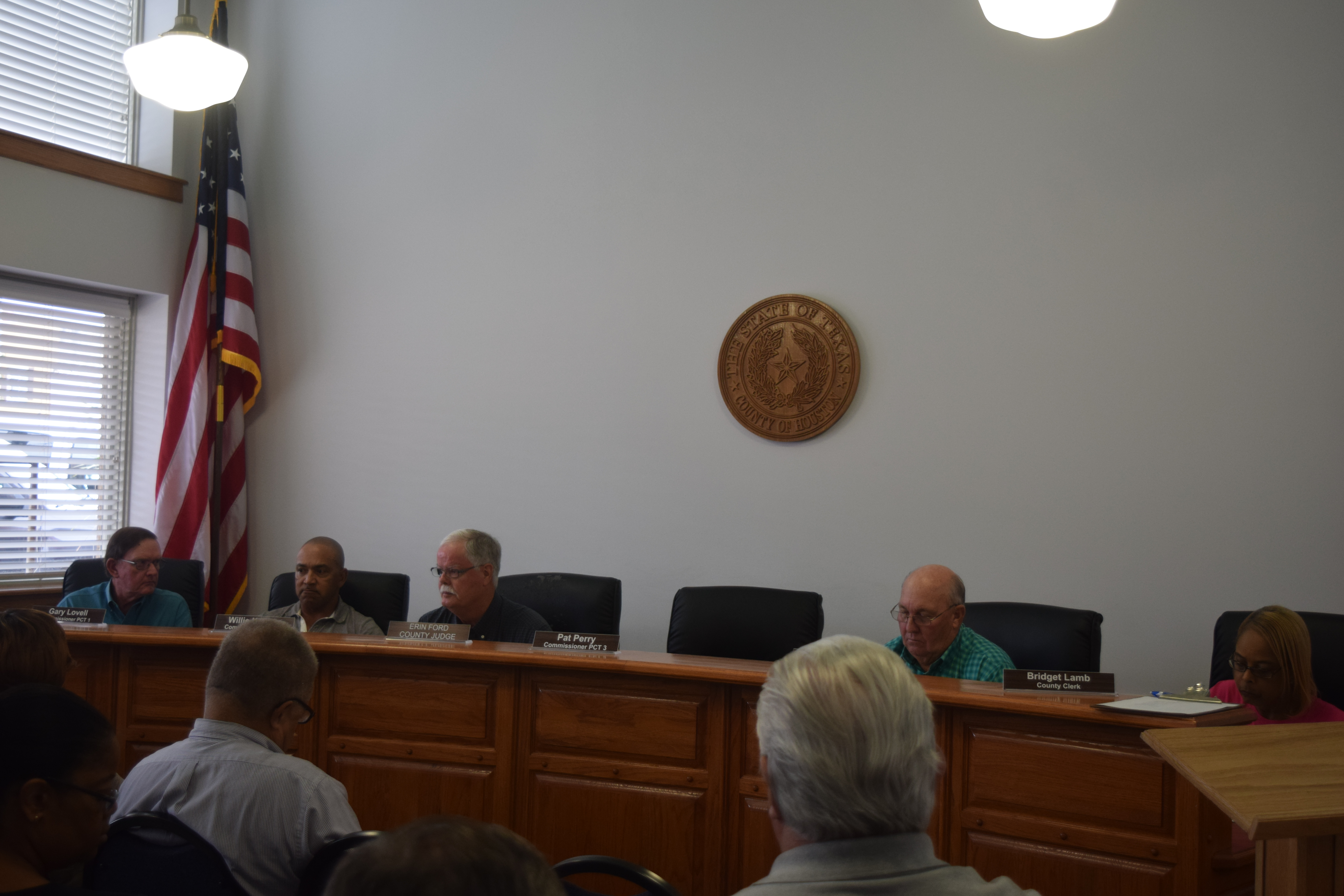 HOUSTON COUNTY – The Commissioners Court of Houston County met in two called meetings this past week. The first was held on Monday morning, Aug. 15 and the second was held on Friday morning, Aug. 18. The purpose of both court sessions was to discuss the county budget for Fiscal Year (FY) 2017.

The meeting was necessitated after the court tabled an agenda item concerning the FY 2017 proposed tax rate during a court session held on Aug. 9. During that meeting, a proposed tax rate of 0.54190 per $100 of property valuation was deliberated. Prior to convening the Aug. 9 meeting, a discrepancy was uncovered in an adopted county policy which could have caused a potential budgetary shortfall, if the policy was not amended.

As a result, the commissioners decided the best course of action would be to table the proposed tax rate and re-examine the budget.

County Judge Erin Ford called the Aug. 15 meeting to order at 9:00 a.m. and thanked County Auditor Melissa Mosley for her efforts in putting together an alternate budget using the county’s current tax rate of 0.504 per $100 of property valuation.

“The court has really looked at this to be able to maintain the tax rate we have – given the downturn in revenue, – in consideration of the citizens of the county,” Judge Ford said.

He suggested going through the alternate budget line by line “… and then come back to it in a subsequent review we will have.”

The judge requested the county auditor to explain the revisions which were made to the alternate budget, when compared to the proposed budget presented the previous week. “On the revenue side, the only change was to drop the tax rate from the proposed rate of .5419 to .504, the current year’s tax rate,” Mosley said.

Mosley then listed the various changes made in the alternate budget, using the current tax rate of .504, which called for: the reduction of 10 full and part-time employees; dissolving the county’s recognition program; disallowing three capital outlays for the District Attorney, County Attorney and Houston County Sheriff’s Office (HCSO);  a reduction in the maintenance expenditures/renovations for the courthouse; a reduction of the petroleum expenses for the HCSO; the complete removal of cost of living adjustments for all county employees; reducing additional funding for juvenile probation; and removing additional funding for roads and bridges. 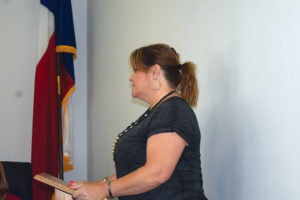 over into the fund balance,” Mosley said.

When she concluded the explanation, the judge addressed the various county department heads in attendance and commented, “May I suggest after we go through each line item and if there is a general consensus, we move on to the next line item. If there isn’t a general consensus, the department head will have time to address the matter and we’ll come back to it in a subsequent meeting.”

Before the department heads began to voice their concerns, Precinct Two Commissioner Willie Kitchen said, “If you will notice, there was no one department that was singled out. This was across the board. The largest cut came from where? It came from here (referring to the four precinct commissioners). What I’m asking you to do before you speak is don’t feel like you were picked on. Everyone is having to have a little give and take this year. We lost revenue because of the valuations. What we need to think about is not us in here, but the people we serve. What do they expect of us? They expect us to do our due diligence and to spend their money effectively. If we work together, we can make it work. We can make it all okay, but we can’t be selfish.”

As the various elected officials and appointed officials presented their arguments for not reducing their individual department budgets, Tax Assessor Collector Danette Millican commented, “Personally, I think you’re making a mistake and I’m a taxpayer. I think you’re making a mistake if you leave it (the tax rate) at 50 cents (.504). You will be playing catch-up somewhere down the road.  Y’all (the commissioners) know because you were all here when the tax rate stayed the same for three years. Now, I know we lost a lot of value and I understand that …”

Precinct Four Commissioner Kennon Kellum commented, “Everything is not going to work.”

Millican replied, “The judge and the auditor had a budget last week at the .5409 level and we all had our employees. Everything was status quo.”

Kellum said, “If we give a three percent raise to all employees and then raise taxes, that doesn’t look good.”

After Millican’s objections to keeping the tax rate at the current level were voiced, the discussion of various line items in the alternate budget continued. However, because the meeting was only a budget workshop, no formal decisions were made by the court.

The second meeting of the week saw Mosley return to the podium to outline the recently revised budget, using a tax rate of .5240. “I used a tax rate of.5240 which increases the tax collection by $244,000,” she said.

“The change includes putting a full-time employee back in the county clerk’s office, taking away a part-time employee and putting back the extra copier. In the contingency fund, we increase that by $100,000 for any unknowns throughout the year,” she explained.

Before she concluded, Mosley said there was one additional change made to the third proposed budget. “This is under non-departmental retiree, medical. This was increased from $15,000 to $124,000 with some recommendations that have not yet been presented to the commissioners court, but it is some funding we know that’s coming.”

Following Mosley’s presentation, Precinct One Justice of the Peace addressed the court. He began by thanking Mosley, the commissioners and the county judge for their efforts in the budget revisions. “With regard to the raise issue – and I feel this is a morale issue with county employees – if we’re not going to have any raises, can we not have any raises? It has been my experience that when we think we’re going to get a three percent raise, there have been people who have received more than that, either through a change in job description or something came up later. I have found that over the years, it creates some really hard feelings. When an employee sees other employees working a deal or cutting some kind of hustle or trying to come over here and sell a plan to get an employee raises for other additional duties, other employees hear about that and it really creates hard feelings. I just feel if we say there are no raises, can we work hard to not give any raises? Let’s try and keep it fair. If we say no raises, let’s stick to no raises,” he said.

Sheriff Darrel Bobbitt also addressed the court and also thanked those who worked to revise the budget. He commented on a recent missionary trip to Peru and discussed the extreme poverty he saw in the country. “A lot of that has to do with education. It is hard for them to progress to the next level because of the levels of education their children have. It is a generation of children that stays at that same level,” he said.

As Sheriff Bobbitt continued, he said, “You (court) know there is no fluff in county government. I promise you, none of these offices have a budget where they are going ‘I wonder what we’re going to do with that (money)?’ That’s not the case. The amount of tax dollars that goes to fund the county is the necessary requirements needed to run our county. Every office is important in what they do and it is essential. Having said that, I want our children educated and from my standpoint I want our community to feel safe as well. I have an understanding and know that we need to have officers to run our jail. WE have to have officers to respond to calls. I think in a civilized society, those are at least two things which are necessary.”

Following the meeting, Judge Ford said he wasn’t positive on the matter but felt the court was leaning towards proposing a tax rate of 0.5240