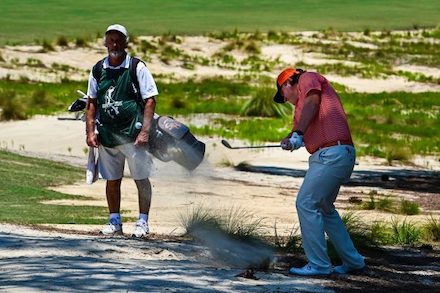 The tournament is a one of the more prestigious golf tournaments on the amateur circuit and has been held at the Pinehurst Resort since 1901. Past winners of the event include Jack Nicklaus, Davis Love III and Curtis Strange.

An invitational tournament, participants are chosen based upon their performance in national amateur championships and overall competitive record.

Holcomb played well enough through the stroke play rounds on Tuesday and Wednesday of last week to advance to the match play portion of the tournament. He breezed through the first three rounds of match play and once again found himself in the semifinals of a tournament at Pinehurst on Saturday.

In the first semifinal of the day, Holcomb took on Trey Winstead from LSU. The fireworks started for the former Bulldog on the second hole when he parred the 439-yard par four while Winstead made a bogey.

Holcomb’s maintained his 1-up lead until the fifth hole when drained another par putt to go 2-up. Number six saw him pad his lead and the ninth hole saw him go 4-up as he finished the outbound part of the course with an even par 35.

After halving the tenth hole, Holcomb gave one back on 11 but still remained 3-up. He salted the match away on 12 and 13 to go 5-up. When the two golfers halved 14, Holcomb had punched his ticket to the finals with a 5 and 4 win.

Following his early morning victory, the current SHSU Bearkat had to wait to see who his opponent would be as Tyler Strafaci and Jonathan Yaun went the distance before Strafaci prevailed 2-up.

As the championship match began, it appeared as if the magic Holcomb found in his morning match was still there. On the second hole, he claimed the early lead as he parred the second hole while Strafaci made bogey.

The roles were reversed on the next hole as Holcomb’s putt for par slipped by the cup while Strafaci drained his putt to tie the match. Holcomb re-captured the lead on the 536-yard par 5 with a birdie, but Strafaci came roaring back on 7 and 8 with a pair of birdies to go 1-up at the turn.

The tenth hole saw the players struggle as both Holcomb and Strafaci walked off the green with a bogey. On 11, however, Holcomb squared the match with a birdie while his Georgia Tech opponent made par.

The two golfers halved number 12, but on 13, Holcomb stumbled just enough for Stafaci to regain the lead. In one of the few slip-ups of his tournament, Holcomb double-bogied the hole while Strafaci made par. On 14, Holcomb righted the ship with a par, but Strafaci birdied the hole to go 2-up.

Strafaci remained 2-up as he and Holcomb halved the next two holes. On 17, Holcomb needed to make par or better to have a chance at a final showdown on 18.

His tee shot found the green but his birdie attempt rolled just by the hole as Holcomb settled for par. Meanwhile, Strafaci’s drive also found the green and when he rolled in his birdie putt, he claimed the championship 3 and one.

The tourney began on Tuesday, June 30 with stroke play. Holcomb, the 2016 Class 3A state champ, shot an opening round 72 on the Pinehurst No. 4 course and backed it up with a 68 on Pinehurst No. 2 the next day.

His two round total of 140 put him in a tie for 23rd, which was good enough for Holcomb to advance to the round of 32, as the tournament reset to match play.

The first day of match play was on Thursday, July 2 where the Crockett native took on the number nine seed, Blake Taylor from East Carolina University.

Holcomb jumped out in front on the second hole to go one up on Taylor. The next hole, however, saw Taylor tie the match and on the following green, Taylor took the lead when Holcomb struggled to find his rhythm on the putting surface.

Taylor remained 1 up through the rest of the front nine, but as the SHSU Bearkat and ECU Pirate made the turn, Holcomb squared the match when Taylor faltered on the 10th green.

With the match all knotted up, Holcomb and Taylor played the next three holes even. On 14, however, Holcomb seized the momentum to go one up.

With only four holes remaining, it appeared as if Holcomb’s 2019 experience at Pinehurst No. 2 gave him a slight edge. He took control on 15 to go 2 up with a par.  Then on 16, Holcomb closed out the match to win, 3 and 2.

The win moved Holcomb into the round of 16 where he took on Davis Thompson from the University of Georgia.

Holcomb was on his game in the morning match. He opened up play by winning the first two holes and halving the third. From there, Holcomb pocketed three holes in a row to go 5 up through only six holes.

Thompson sliced a skin off of his playing partner’s lead but on number 8, Holcomb won the hole to retake his 5 up advantage.

At the ninth hole, Thompson got the lead back down to 4, but Holcomb put the proverbial nail in the coffin by winning 10 and 12 to go 6 up.

The Georgia Bulldog battled back to win 13, but when he and Holcomb halved 14 it was over as the SHSU Bearkat won 5 and 4 to advance to the Quarterfinals against Matt McCarty from Santa Clara University.

McCarty birdied the first hole to take the early lead as the pair of golfers teed off at 1:00 pm. Holcomb, as he is quickly becoming known to do on the No. 2 course, reeled him back in on the second hole with a par while McCarty holed out with a bogey.

Spring Creek Country Club’s favorite golfer gave the lead back on number three, but Holcomb tied the match on six with a par on the 203 yard par-3.

After the two golfers halved 7 and 8, Holcomb took over the match with a birdie the par-3 ninth hole to go one up at the turn.

Holcomb picked up the next two holes to go 3 up. It stayed that way until the 14th green when Holcomb parred the hole to go 4 up with four to play.

McCarty wasn’t about to give up as he went par-birdie on 15 and 16 to cut Holcomb’s lead down to 2. On 17, Holcomb found the green from the tee box and then two-putted for par. McCarty made a run at birdie to keep the match going, but when his putt slid by the hole, Holcomb had claimed his second match play win of the day and advanced to the tournament semifinals on the Fourth of July.