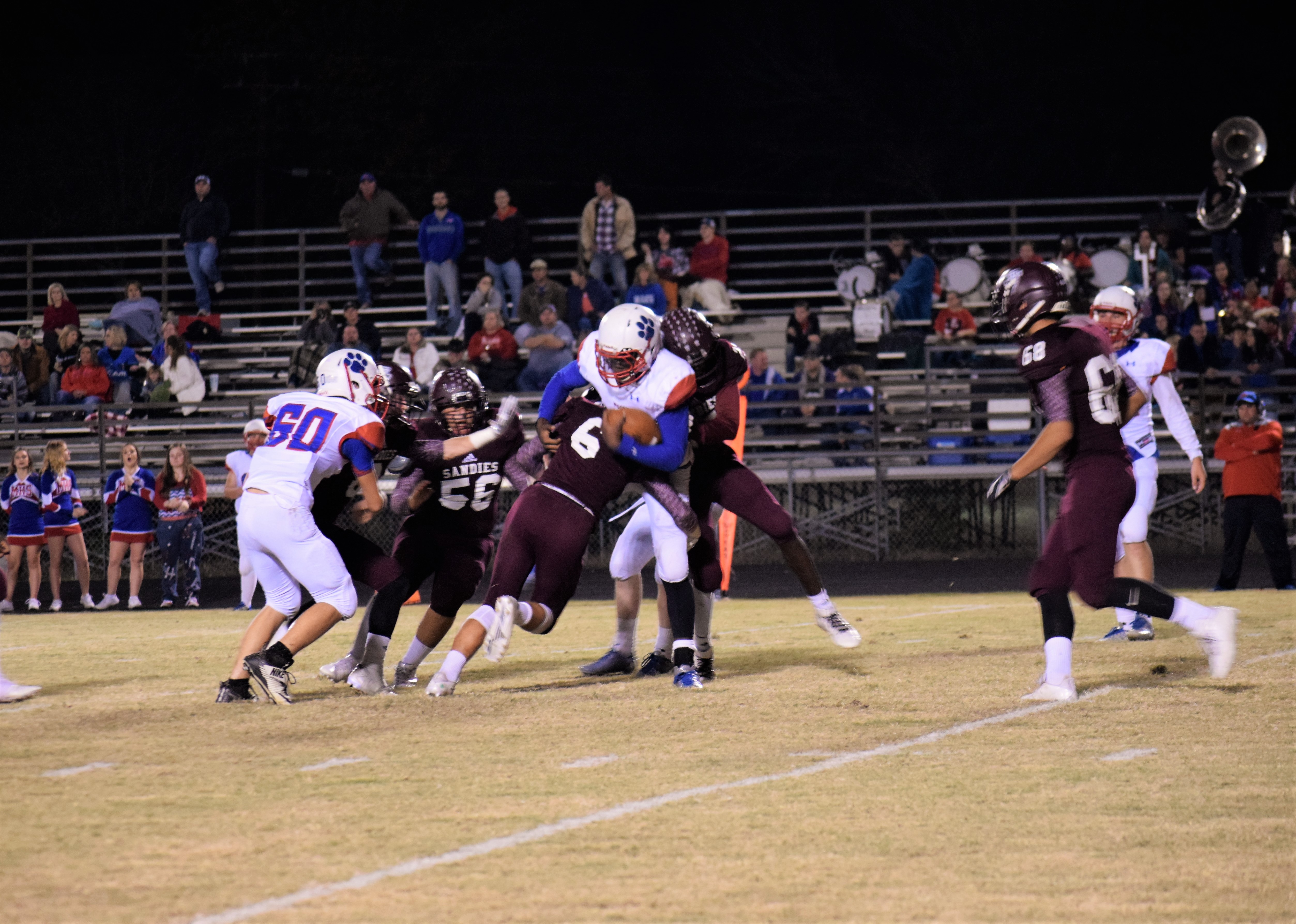 Grapeland Heads into Playoffs as #3 Seed

GRAPELAND – With playoff seeding out of District 11-AA DII on the line, the Grapeland Sandies welcomed the Mt. Enterprise Wildcats to Sandie Stadium for a clash to see who would go in as a three seed and who would advance as a four seed.

The Sandies wasted little time in showing the Wildcats they were in for a long night as Grapeland’s Tyrin Wiley took the opening kickoff at his own 20 and returned it down to the Mt. Enterprise 18-yard line. Things only got worse from there for Mt. Enterprise as Grapeland’s offense was clicking on all cylinders and the defense showed it could play a little football too as they shut out the Wildcats by a final score of 35-0. 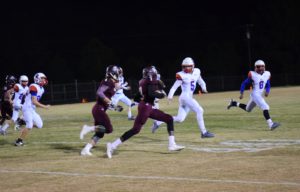 After Wiley’s kickoff return, Brayden Cheatham took over. Cheatham gained seven yards on both first and second downs and then bulled his way into the end zone from 4 yards out for the game’s first score. Josh “Bear” Ackley split the uprights with his extra point attempt and with 10:31 remaining in the first quarter, the Sandies took an early 7-0 lead.

On the ensuing kick, Mt. Enterprise took possession of the ball at their own 48-yard line. Behind the running of QB Jase Jones and RB Kendre Miller, the Wildcats moved deep into Grapeland’s end of the field.

On fourth and six from the Sandies’ 26, however, the Grapeland “D” rose up and slammed Miller to the turf for a one yard loss and a turnover on downs.

Just like their initial score, the Sandies wasted little time in extending their lead the next time they touched the ball. On first down, RB Brannon Bedre broke free for a 30 yard romp and on the next play Grapeland QB Rick Frauenberger found James Coleman all alone in the Mt. Enterprise secondary for a 43-yard scoring strike. Ackley’s PAT made the score 14-0 with 3:23 left to play in the first quarter.

The Wildcats’ next possession ended pretty much like the first time they had the ball. Jones kept the pigskin on the ground and moved across the midfield stripe, but on fourth and five from the Grapeland 42, Jones was thrown for a three yard loss and the Sandies took over at their own 45.

Three plays later, the Sandies were back in the end zone. Cheatham ripped off a 34 yard run to move the ball to the Wildcats’ 21. After Frauenberger threw an incompletion on first down, he connected with Ackley on a swing pass and Ackley weaved his way through the Mt. Enterprise defense for a 21-yard TD. Ackley also connected on the extra point and with 45 seconds left in the quarter, Grapeland had opened up a 21-0 lead.

After a Mt. Enterprise punt to start the second quarter, Grapeland took over at their own 38. On first down, Bedre found a crease in the Wildcat defense for a 14 yard gain to move the ball into the Mt. Enterprise end of the field. 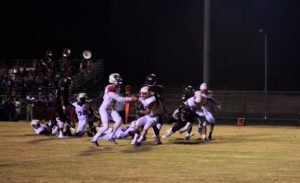 Following a Frauenberger incompletion, Bedre picked up another four yards on the ground. On second down Frauenberger found Coleman for a 27 yard completion to move into the Wildcats’ red zone. From there, Bedre took the rock the rest of the way as he picked up a yard on first down, 14 on second and then slipped into the end zone from one yard out to make the score 28-0 after the PAT.

Following the kick, Mt. Enterprise took over at their own 44. Once again, it was the Jones and Miller tandem who did the work as they moved the ball down to the Grapeland 30-yard line.

Once there, however, the Wildcat drive stalled. Jones lost two yards on first down, but Miller picked up three on second. An incompletion from Jones forced a fourth and nine from the 29 and on the next snap, Ackley beat his blocker to sack Jones and give the ball back to Grapeland with under two minutes left in the half.

The Sandies had an opportunity to pad their lead before halftime but two costly penalties, along with a last second interception, kept Grapeland out of the end zone and ended the half with Grapeland ahead by a score of 28-0.

After the break, the Wildcats continued to struggle offensively as their first possession of the second half netted a grand total of negative five yards.

Mt. Enterprise was forced to punt and the Sandies launched a time consuming drive from their own 43. Grapeland kept the ball on the ground with the running of Cheatham and Frauenberger. Once they crept into the Mt. Enterprise red zone, however, Frauenberger connected with Ackley for a 14-yard TD pass. The extra p 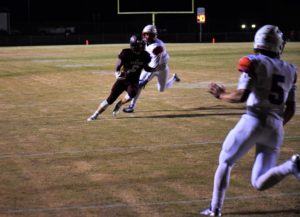 The remainder of the game was scoreless and the Sandies ended their home season on a high note with the 35-0 win over the Wildcats.

After the game, AD/Head Coach Wayne Mahaffey commented on his team’s victory.

“It was a nice, relaxed win,” he said. “We took care of business early. They were kind of short-handed, so we were able to do just about whatever we wanted to do.”

Concerning the Sandies’ defensive play, Mahaffey said it was the first time in a very long time Grapeland had shut out an opponent.

“We were close last week, for a half, but didn’t play as well in the second half. Tonight, we played pretty well the entire ballgame. Their running back and quarterback are pretty good, but we did a really good job in the first half of shutting them down,” the coach said.

“It was good to have a win like this heading into the playoffs. Everybody got to play and everybody feels good. There were no injuries and everyone seems healthy,” he added.

The Sandies go into the playoffs as the third seed from District 11-AA DII. They are scheduled to play the Evadale Rebels in the Bi-District round of the playoffs next Friday, Nov. 17 in Willis. Kickoff is slated for 7 p.m.