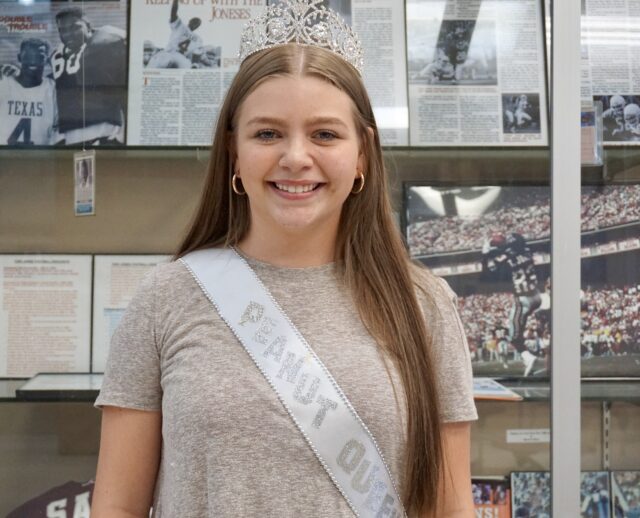 GRAPELAND –  With the recent celebrations of the 77th annual Peanut Festival in Grapeland coming to another successful end, the festival is cleared, the streets are cleaned and the people go home. For the Peanut Queen – it wasn’t easy becoming local royalty.

Emily Hanna is originally from the San Antonio area where times were hard for her family. She spent her free time watching videos online and learning to cheer just like the older girls she always admired.

When she moved to Grapeland, things started improving and she was able to enroll in cheerleading. She learned competitive cheerleading and school cheerleading from the sixth grade. Now a senior at Grapeland High, Hanna devotes her time to her studies. Keeping the grades up is the only way to not only get into college, but maybe qualify for a scholarship along the way.

Her older sister Maggie competed – and won – the Peanut Queen title last year. So Hanna knew what she was getting herself into when she volunteered to be a candidate. She realized the time, effort and money it takes to compete.

“It is a lot of work,” Hanna sighed. “It can be really stressful, but it feels like more work than it really is. Because you are stressed and trying to get things done. And then you are also in school. I got a job in the middle of it and I do cheer – which is practices, games and busy weekends.”

In spite of the hard work, Hanna would not have missed it for the world.

“We made a really homemade float!” Hanna said. “It was more fun doing it with my family and just making it look as good as we could! It was fun. But again, very stressful trying to figure out oh, ‘I have to play this, I have to buy that.’ A lot of money in dresses! We went to Tyler and it took about two stores but I found my dress the first day so I didn’t have to go the next weekend.”

Hanna played the piano for the talent portion of the pageant, something she has played most of her life. She said she only finished practicing the song the night before. When she won, she kept repeating, “I am so happy,” to the applause of the crowd.

“It is a very emotional thing. I didn’t think it would be as emotional as it was. I knew I was going to have little happy tears, but it was just watching her (Hanna’s older sister) walk out with the crown and the flowers – it was a roller coaster of emotions,” Hanna said.

Asked if she was embarrassed about her reaction and the tears that flowed freely, Hanna answered, “I think the community probably appreciated that somebody was so excited and thrilled to be crowned.”

Hanna is planning on studying somewhere close to Grapeland and eventually wants to become a labor and delivery nurse. Being part of history – part of the Peanut Festival tradition – that is something that will never fade from her memory.

“It will always be with me,” Hanna concluded. “I am a part of the history of this town. I can always come back and I have something here. I am somebody here. It’s really cool.”

Davy Crockett Days, A Little Bit of Everything
ARE WE IN A RECESSION? DEPENDS ON WHO YOU ASK
2018 Peanut Queen: Welcome to the House of Parker