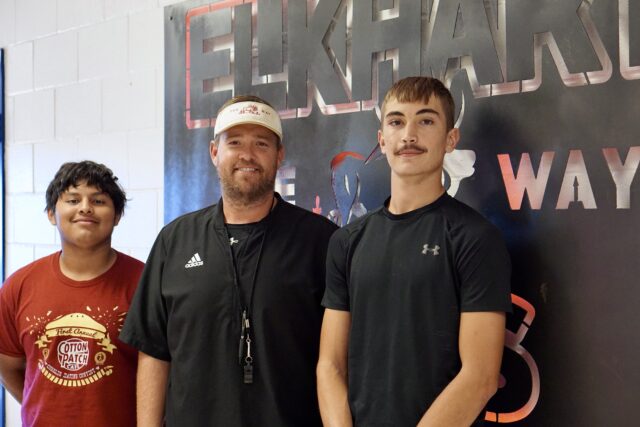 ELKHART –    Elkhart Independent School District Athletic Director and Football Head Coach Luke Goode took time before practice Wednesday, Oct. 27 to speak with the Messenger about the current football season. It has been a year of building for the future and not all of the games have gone Elkhart’s way. The Coach looks beyond those results, seeing how the team is building stronger athletes, students and people. With a big win against district rival Florence last week, Elkhart is fighting to secure a place in the playoffs. Before their big game against Clifton on Friday, the Coach and two of his young players tell the Messenger how they are forging their team. See the full video online at our website, www.messenger-news.com, sponsored by Anderson County Precinct One Constable David Franklin.

How do you feel about your progress in this season so far?

“It’s been a challenging year for sure. We have talked about it as a team. Everything we do, we do as a family. Even since offseason, we have built together as a family. And we knew we would go through the season together as a family. If you look at our preseason, we played some really great competition. And in playing those, we would like to have a better record, absolutely. But at the same time, that just got us ready for district. With the win last week – which was big – we still keep our goals alive of making the playoffs. And so this week, playing Clifton, we will be looking to go out there and complete our mission, our goal. We will just gonna go out there and play each play, one play at a time. Just because one game doesn’t go your way – I have been most proud of our guys. A lot of our fans have told me, ‘Hey, Coach, you all play to the very last second.’ I think that says so much about our kids and their character”

What are you hoping to achieve with this team?

“I think for us, it goes all the way back to offseason. I talked a little bit earlier about us being a family. And I think it’s important that they know they can come to us and talk to us – and we’re going to be here for them. Even if it’s a random practice. These kids know they are going to get coached hard on the field. The expectations are always high. That doesn’t mean we’re not still here for them. That’s ultimately the overall goal and overall thought process I want them to have. That is what we preach – we talk about effort, we talk about coachability. We talk about discipline. Eric said a while ago, but this is that’s one of the things we’re talking about. ‘The time is always right to do what’s right.’ So we help our kids embody those things. And I feel like our varsity really has a lot of our older, mature kids that really understand that. I hope our young kids can can see that and learn from it, too.”

“I have been working really hard and keeping sports and school held together, which for me is surprising! The main thing I have learned from playing football is being disciplined. Knowing some things are not going to go my way, and I just have to go through it and keep pushing, no matter how it turns out.”

“It’s been great. We have been doing very well this year as a team and as a family. I am really happy to play for us. The coaches and players have taught me some things. Some of the seniors, some of the juniors – if you just open your ears, you can learn from the guys around you. So it’s pretty cool.”