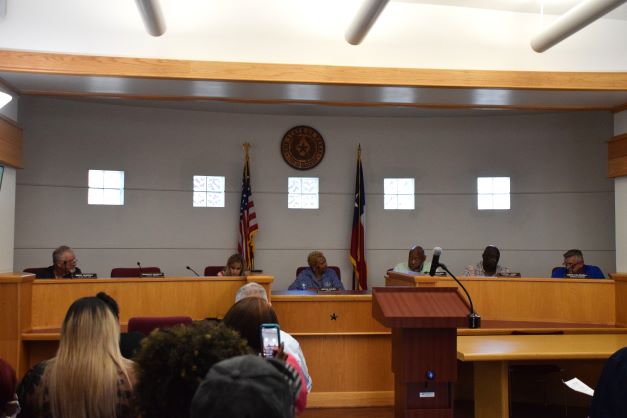 CROCKETT – By a vote of 3-1, the Crockett City Council approved moving forward with a forensic audit on the Crockett Economic and Industrial Development Corporation (CEIDC).

The vote occurred after a lengthy discussion was held during a meeting of the city leaders which occurred on Tuesday, June 21.

As the meeting got underway, eight Crockett residents voiced their opinions pertaining to the CEIDC during the public forum portion of the council session.

Once the public comments concluded, Councilman Darrell Jones commented there was nothing in the council packet pertaining to what was said “… nor have they (Crockett residents) presented council any documents, based on what they were saying.”

Councilman Gene Caldwell replied the possibility of a forensic audit was a tough decision to make. He also cited a speaker during the public forum who called for unity.

“Sometimes, you have to make hard choices and when you have citizens/taxpayers who have questions about any form of government, us as council, we take an oath to come out here and do what is right and transparent,” Caldwell said.

“The majority of this was under Tim Culp,” Jones said. Culp was the CEIDC Executive Director prior to 2011.

Crockett Mayor Dr. Ianthia Fisher spoke next and reminded council the possibility of a CEIDC audit would be discussed later as an agenda item.

After several other agenda items had been disposed of, the discussion on the possibility of conducting a third-party forensic audit of the CEIDC was resumed.

Dr. Fisher explained even though the council might agree to conduct the forensic audit, there were quite a few details that would need to be determined at a later date to establish the scope of the audit.

“Part of this discussion will be what we are going to do and I know tonight we will not be able to establish the full details. I know when you are talking about a forensic audit, there are about 15 different types. What we are going to ascertain, or come to a consensus, is what we want to do. From there, we will take the next steps,” the mayor said.

Jones began the discussion and said, “We have a city attorney, Mr. Bill Pemberton, and if you guys vote for this, you are saying he doesn’t know what he’s doing. He’s a perfectionist. He looks at every document that comes through this city.”

The councilman also said he had asked that a representative of the accounting firm of Axley and Rode, LLC be present at the meeting because “… there’s not been one thing, other than the checks, that said anything was wrong with economic development. Not one thing was reported and there was not one thing Mr. Pemberton reported. Everybody knows the audit comes to (City Administrator) Mr. John (Angerstein). He looks at it and then it goes to Mr. Pemberton. He looks at it and gets back with Axley and Rode to make sure everything is ok. Then we get it. Every report is then brought to you, sir (Mayor Pro Tem Mike Marsh) as well as you (Caldwell). Y’all have looked at it and we have approved every last one. Now, how in the heck is something wrong. All this is a lie and y’all said you voted and Mr. Pemberton knew what he was doing.”

Caldwell replied, “We have several people who know what they are doing when looking at these documents and we are not professional accountants up here. Some times you have to rely on professionals in that category to get the right insight to know what we are looking for. If there is anything there, we need to correct it, no matter what. It is our duty up here, no matter who did it. I’m sure there are a lot of mistakes from years ago, but if they have been done let’s get it corrected and get on the right track so the public will be with us again. Right now, we have half the city thinking we are not taking care of business and covering things up. I don’t want to be like that. I want to do what I was voted in to do and if it takes a forensic audit to do it, that’s what we need to do. That is what I’m recommending we do.”

Councilman Ernest Jackson spoke next and said it was his belief the time had come to take a closer look at the CEIDC.

“The public trust has been violated,” Jackson said. “An audit reveals what an entity is doing and making sure it is on track with its goals. A forensic audit deals with the allegations or beliefs that there is something illegal or wrong with that particular entity. I have lived here in Crockett all 67 years and I don’t like division. I want to see us together.”

Jackson cautioned, however, that in the past history of the CEIDC, no forensic audit had ever been conducted. For him to be a part of moving forward with the forensic audit, Jackson said he wanted to see the audit begin well before the CEIDC stewardship of James Gentry.

After a few moments of back-and-forth between council members, Mayor Fisher sought to explain what went on in an audit.

“When you do an audit, you pull out a section and you review it. You don’t review every area. What I think the council is saying is that a forensic audit is different. One of the considerations of a forensic audit is the cost. What type of forensic, whether you want a procedural or financial? What we are going to have to decide is for every year you go back, there is a price tag attached to it,” the mayor said.

“We can agree to an audit,” she continued, “but you are going to have to have some guidance. You can look at 1,000 papers but if you don’t have an end in mind, or expectation of what you’re looking for, then you’re just going down a rabbit hole. And it’s an expensive rabbit hole. It costs from $200 for a light (audit) to $500 per hour. You’re talking many, many days. What we need to do tonight, is see if the council can agree on a forensic investigation. Then, we need to come back and script out what to expect, what will be covered and who will foot the bill.”

Eventually, Jones made a motion not to conduct a forensic audit, however, his motion died for lack of a second.

Jackson made a second motion to conduct a forensic audit to include all CEIDC administrations back to Tim Culp. Marsh seconded the motion and when the item was put to a vote it passed by a margin of 3-1 with Jones voting against the measure.

Prior to CEIDC agenda item, Crockett Police Chief gave kudos to several members of his department in reference to a pair of incidents his department dealt with.

“On the morning of May 25, officers were dispatched to a local business in reference to a stolen truck. Once the officers arrived, they discovered two unknown male subjects had entered the premises and drove the truck through a gate,” the CPD Chief said.

While they were still investigating the truck theft, Smith said they received another call about the two unknown subjects entering another business and stealing over $30,000 in tools and electrical wire.

He added the truck was eventually found in the Houston area and brought back to Crockett. As officers were processing the vehicle, they came across identifying materials in the truck that allowed them to identify possible suspects.

“There were some documents that were recovered that led us back to the Houston area. Officers went down there to shake the bushes, so to speak, and wound up identifying both subjects while recovering over $30,000 in stolen material from our city and Walker County. I would like to publicly commend Assistant Chief (Alfredo) Fajardo for his work on the case and Captain Blake Gates,” he said.

The chief also spoke about the recent robbery of the Tobacco Barn, where between $10,000 and $15,000 in tobacco products were stolen.

“The suspects were identified as being part of a ring out the Dallas-Fort Worth area. I would like to publicly commend Lt. Lonnie Lum and Officer Matthew Milligan for their work on that case,” Smith said.