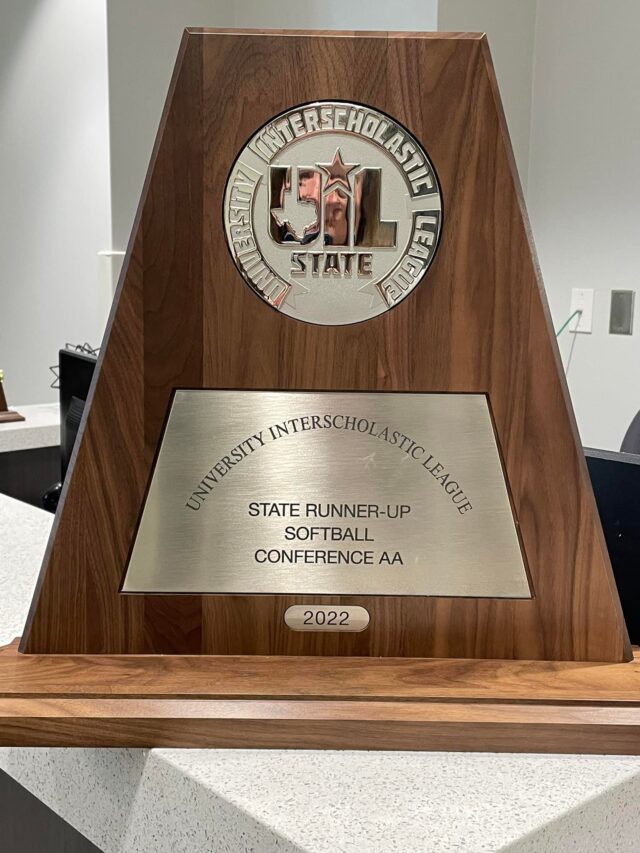 AUSTIN – The Lovelady Lady Lions magical season came to an end on Wednesday night as they fell to the Crawford Lady Pirates in the Class 2A State Championship Game by a final score of 3-0.

It certainly wasn’t for a lack of effort as Lady Lions could be seen diving for balls all evening and trying to get in scoring position, only to be thwarted by a great throw or pitch. No. Crawford was simply the better team. On Wednesday. If they played again on Thursday, maybe the Lady Lions win. Maybe. It was that close.

As it was, the Lady Lions were simply baffled by the pitching of Crawford’s Kenzie Jones who went seven innings and only gave up three hits, while striking out five and walking two. It wasn’t so much that she overpowered Lovelady, she just got the Lady Lions to hit the ball to where her defense was.

Macie LaRue, who pitched the Lady Lions to victory in the Class 2A Semifinals, was back in the circle for the State Championship. London Minnix led off for Crawford and struck out after a nine-pitch at-bat. Savanna Pogue followed in the batting order and grounded out to Haven Prager at first.

Kylie Ray was up next. On a 1-1 pitch, she ripped a double down the left field line and when Jones followed with a single, Ray was able to scamper home with the game’s first run. LaRue limited the damage to a single run, however, as she got Taylor Gohlke to pop up to center for the third out.

In a sign of things to come, the Lady Lions went quietly in their half of the first. Mihyia Davis grounded out to second, Scout Lovell grounded out to short and Morgan Womack flew out to center, to close out the frame.

The second inning saw Crawford tack on a run. Haley Holmes led off with a single by a short and moved to second on a sacrifice bunt by Madi Green. Holmes took third when Addi Goldenberg also dropped down a sacrifice bunt.

Brooke Bubert was hit by a LaRue pitch to put runners at the corners with two outs and when Minnix hit a shot to third that was briefly bobbled, she was able to beat the throw to first while Holmes raced home to make the score 2-0. LaRue regrouped, however, as she was able to get Pogue to ground out to second and retire the side.

Jones continued to have the Lady Lions’ number in the bottom of the second. She got Linda Martinez to foul out down the first base line while Haven Prager popped up to left and Rylee Biedrzycki grounded into a 6-3 force at first to send Lovelady back out to the field.

Ray led off the top of the third and grounded out to Lovell at short. Jones was up next and hit a grounder to short. Lovell ranged to her right to field the ball and threw to first but the speedy Jones was able to beat the throw and was called safe. Jones was lifted for a courtesy runner – Kymbree Larance – and when Gohlke ripped a double into the left-centerfield gap, Larance motored around the base paths and crossed the plate to make the score 3-0, in favor of the Lady Pirates.

LaRue kept her composure and retired the next two batters she faced, striking out Holmes and getting Green to pop up to first.

The Lady Lions finally got a base runner in their half of the third as LaRue led off and drew a walk. Shyanne Pipkin followed in the order, but struck out. That brought Bailee Albinus to the plate. Albinus tried to advance LaRue with a bunt but when she made contact, it went right to Gohlke at third who turned and fired to Pogue who was covering the bag at second for out number two. Davis was up next but was unable to keep the inning going as she grounded out to third to end the Lovelady threat.

Despite being down 3-0, as the game moved into the middle innings, the Lady Lions were poised to strike. LaRue mowed down the Crawford batting order in the top of the fourth on four pitches to bring the Lady Lions in from the field.

Lovelady had its two, three and four hitters due up in the bottom half of the frame and hopes were high. Lovell led off for the Lady Lions and gave the ball a ride to deep center. Unfortunately, it wasn’t deep enough, as Minnix was able to flag it down at the warning track. Womack followed Lovell in the order and drew a walk.

That brought Martinez to the plate and she ripped a shot down the third base line. Gohlke made a nice play on the ball and fired to second in time to catch Womack and when Prager struck out, the Lovelady threat was extinguished once again.

A quiet fifth gave way to the sixth as Lovelady threatened once again. LaRue retired the Lady Pirates in order in the top half of the inning and gave the Lady Lions a chance to put some runs on the board. It was not meant to be, however.

Davis lined out to center, but Lovell singled down the left field line. With Womack at the plate, Lovell attempted to swipe second. A great throw from Crawford’s catcher caught Lovell and wiped out a potential run. Womack singled but when Martinez fanned the inning was over.

After LaRue retired the side in the top of the seventh, the Lady Lions were down to their final three outs. While a miraculous comeback was hoped for, it simply didn’t happen. Prager grounded out while Biedrzycki flew out to center and LaRue popped up to first to end the game, giving Crawford the Class 2A State Championship, 3-0.

Even though it wasn’t how they wanted their season to end, the Lady Lions played their hearts out all year. They overcame injury and adversity throughout the playoffs to reach the Championship Game. And who knows? A break here, or a break there, and we might be talking about the State Champion Lovelady Lady Lions.

Regardless, from everyone at The Messenger Sports, congratulations on a great season and best of luck in your future endeavors.