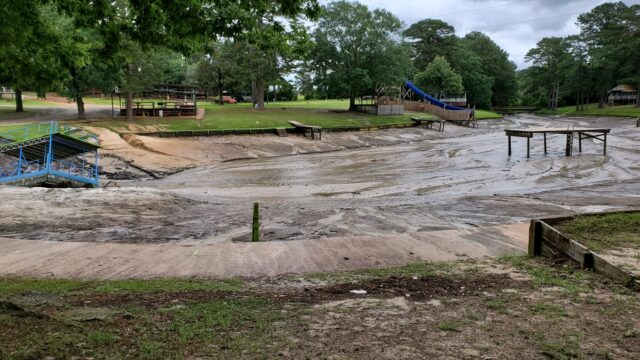 Over 11” Reported in Grapeland

GRAPELAND – With the ground already saturated from the rains of the past few weeks, Mother Nature had one last trick to pull out of her sleeve as May turned into June, early Tuesday morning.

It was raining as most people turned in for the night on Memorial Day, but no one expected what they would wake up to on Tuesday morning. Rains lashed the Grapeland area overnight with as much as 11.5 inches being reported in some parts of the area.

Main Street in Grapeland was closed in front of the old gymnasium, while several homes along Olive Street were flooded, yet again. The National Weather Service out of Houston tweeted at 6 am on Tuesday, “If you are in the Grapeland area, avoid all travel! Flash flooding has made roads across the area impassable. Local authorities reported a swift water rescue after a car was swept away by floodwaters. We have received a rainfall report of 7.4 inches.”

The Grapeland Fire Department reported they rescued the occupants of a car just after 3 a.m. which was being swept away by floodwaters. The incident happened on FM 228, approximately two miles east of town.

Then, there was Salmon Lake. After hosting yet another successful (although somewhat damp at times) Memorial Day Gospel Bluegrass Festival, most of the attendees had packed up their campers and RVs and headed home after the long weekend.

They should be glad they did because in the middle of the night, the dam broke spilling the contents of the lake into the seating area, destroying the water wheel house and anything else that was in its path.

As they surveyed the damage, owners Trent and Bethany Owens spoke about the previous night’s events.

Trent said he really started to become concerned around 11 pm when “… our onsite weather station showed five to six inches per hour in intensity. I knew then I had better go turn the valve on. I stayed out until about 12:30 am, saw it wasn’t going down and I knew we were going to have a problem.”

He said they received an alert over their cell phones which indicated just how dire the situation was.

“I guess around three, it was already pushing close to 10 inches of rain. I came out to check on it again and the water was already over the dam. It was starting to erode near the wheel. We also took some measures to make sure the drain was clear and that nothing was slowing it down. But, looking at the radar, there was another red cell coming at us. We didn’t stand a chance. It just started raining harder,” he said.

Trent went on to say the water wheel house was pushed up against the stage “… and we were just praying the stage would hold. It was making all sorts of groaning noises, but it’s a metal structure and it held up, fortunately.”

Bethany added, “A lot of the community has already reached out to us. It will take the community and all of us to help bring it back. We are going to need help, that’s for sure.”

As to what it will take to rebuild the lake, Bethany said the main issue would be the rebuilding of the damn.

“That’s the solution – rebuilding the dam. We will most likely put in a spillway so there is a little bit more of a fail safe than what was originally in place,” she said.

Trent indicated they would also be enlarging the drain in order to help prevent the dam from being breached.

“Right now, we are still in a state of shock,” Bethany said.

“We’re going to start looking at estimates and how much it will cost to build this back,” Trent said. “We need to find the right people to talk to.”

No injuries have been reported from the rupture of the dam.