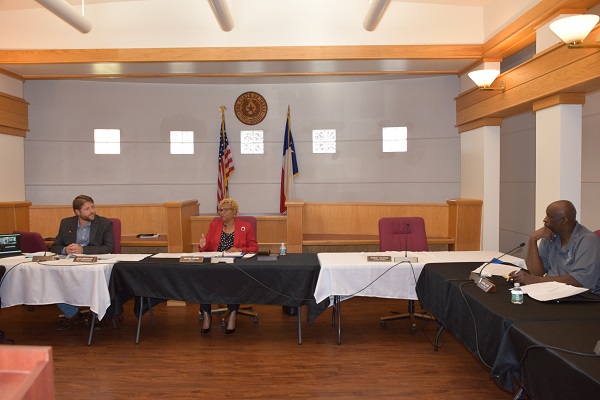 As the meeting got underway, Crockett Mayor Dr. Ianthia Fisher informed those in attendance that Council Members Marquita Beasley, Butch Calvert and Ernest Jackson would be joining the meeting via the internet.

Pertaining to the budget, City Administrator John Angerstein explained to the council the preliminary budget was balanced and set on a tax rate of $0.5825529 per $100 of property valuation. This rate will provide $51,897 additional dollars in revenue when compared to FY 2020and will decrease the average homeowner’s property tax by $8.40 per year.

Prior to the budget discussion, a lengthy discourse concerning the council’s acceptance of a US Department of Commerce (DOC) grant in the amount of $2.5 million was held.

“About six months ago, we applied for this project,” Angerstein informed the council. “The total grant is for $2.5 million.”

Angerstein said the grant will fund new water mains and new roads along S. 4th St. and S. 5th. St., leading to the industrial park, as well as fiber optic lines for all the businesses from Loop 304 up to the Houston County Law Enforcement Center.

In the initial announcement of the grant award, it was stated by the DOC, “This project will promote economic resilience by providing enhanced broadband and natural gas line infrastructure needed to advance business growth in the region and attract new businesses to the area.”

Unfortunately, the city administrator explained, the natural gas line had to be pulled from the grant because even once the project was completed, the line was owned by Center Point and federal funds could not be used for a private entity.

Angerstein went on to say the Crockett Economic and Industrial Development Corporation (CEIDC) had initially agreed to split the cost of the grant match. However, when the DOC pulled the gas line from the project CEIDC Executive Director James Gentry requested the CEIDC portion of the match be re-evaluated.

A lengthy discussion among the council members followed before the matter was tabled for further consideration and evaluation.