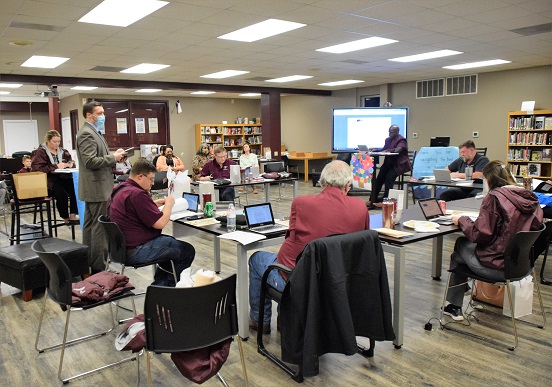 GRAPELAND – January is School Board Appreciation Month and the administration, faculty, staff and students of the Grapeland Independent School District took time on Monday evening to say thank you to the seven trustees who serve on the GISD Board.

As the Jan. 18 regularly scheduled meeting of the GISD Board of Trustees got underway, GISD Superintendent Don Jackson addressed the board members.

Once the superintendent concluded, gifts were presented to the trustees from the administrative team, the secondary, elementary and Early Learning Center campuses.

Following the board appreciation, Jackson provided his monthly report to the trustees.

The superintendent questioned if the board would like to move the next scheduled meeting from Feb. 15 to Feb. 22 because of the district being off for President’s Day. After a brief discussion, it was decided to move the meeting to Feb. 22.

“We are saddened to report on the unexpected passing of Coach Jerry Richards. He was a faithful Grapeland ISD employee for 38 years Jerry was athletic director here, head football coach, head baseball coach, head golf coach and I think he even coached a little basketball. We have been asked what we can do to honor him. Some of his ex-players have asked if we could possibly name a field or a gym or stadium after him. I told them I would bring it to you guys and we would discuss it further. He was very dedicated to our school district and I would love to honor him,” he said.

In reference to COVID-19 stats in the district, Jackson said there were currently no staff members with the virus, but added 24 students were currently out because of close contact with those who tested positive.

As the meeting continued, Mike Brotherton, with the accounting firm of Belt Harris Pechacek, LLLP, provided the GISD board with the results from the recently completed 2019-2020 financial audit. He reported the district received an unmodified opinion, which is the highest rating available.

During his presentation, Brotherton said the district had an ending fund balance of $4.6 million, up over $900,000 from the previous year.

“The rule of thumb is you want at least three months or 25 percent of your annual expenditures in the fund balance and I think the district is currently at 74 percent,” he said.

The election judge will be Elizabeth Reynolds and the early voting clerks will be Kristi Streetman and Julie Martin.