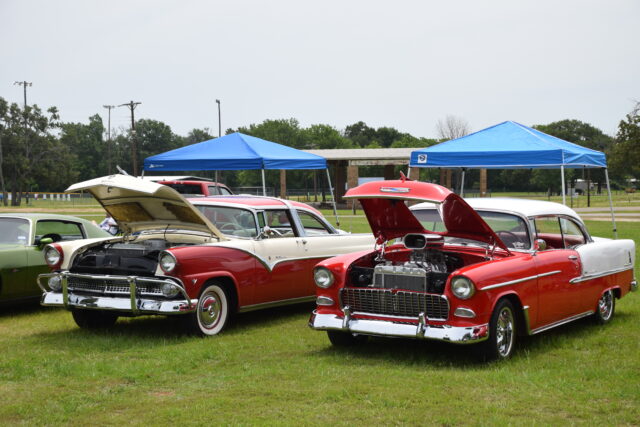 CROCKETT – The Davy Crockett Music and Arts Festival kicked off on Friday of last week with a concert from Moe Bandy. The event was held at the Crockett Civic Center and for those who attended the show, they all said the singer was very entertaining, with both his songs and stories.

On Saturday, the festival moved a couple of blocks down the road to the Davy Crockett Park. There, a classic car show with motorcycles and rat rods was held. The cars were all polished and looked sharp but the scorching heat kept a few would-be attendees in doors.

Also, live music filled the air as several local acts took the stage to perform both original and cover tunes. The bands were all on-point and the crowds enjoyed the performances.

A Monday morning Facebook post from the Chamber expressed their appreciation for all involved in the festival.

“A SUPER Big THANK YOU to all of you who came out for our Davy Crockett Music & Arts Festival this year! The music was HOT! The Car Show was HOT! The Vendors were HOT! The food was piping HOT and DELICIOUS! Thank you to the Crockett Area Chamber of Commerce Board of Directors, Ambassadors, and Office Staff for making it all happen and toughing it out through that dang Texas Heat! Big Thank you to Ryan Lawless, Johnny Riley, Crockett State of Mind Band, Troy Seale, Nathan James, and Rooftop Travelers Official!  If you didn’t make it out during the day to see these incredible performers, you missed OUT!” the post stated.

Sunday saw the festival move back indoors for a cupcake challenge. There were three age groups participating and they were: 6 – 12 years of age; 13 – 17 years of age; and over 18 (Adult). The delicacies were judged on both taste and appearance.

Ambassador Cheryl Balmer did an amazing job coordinating the Davy Crockett Music and Arts Festival Master Cupcake Challenge! Thank you to the CACC board that came out to help and for our wonderful judges, ambassadors and volunteers! While the winners have not been announced as of yet, the cupcakes were amazing, according to the CACC judges.