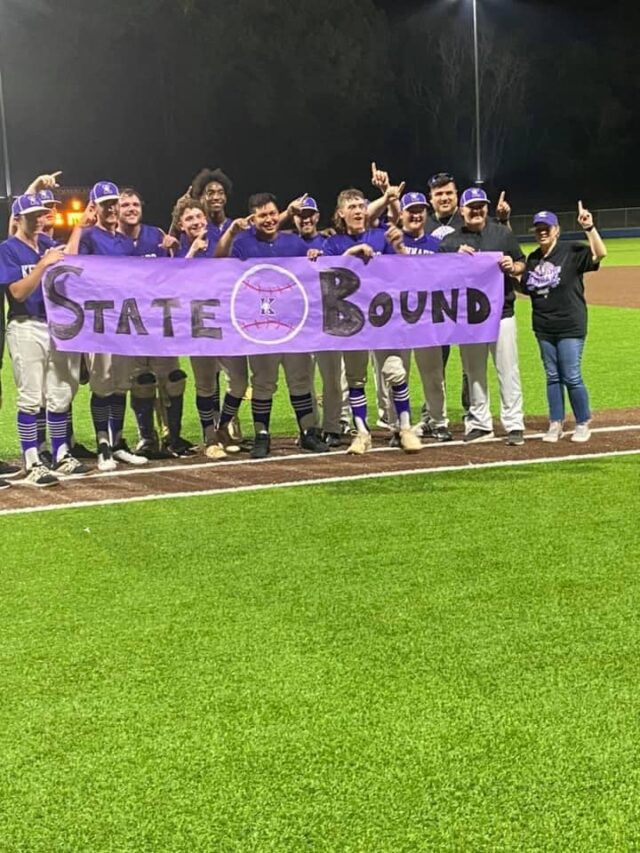 TYLER – All season long, the Kennard Tigers have flown under the radar. That all changed on Thursday evening, however, as the Tigers swept the Miller Grove Hornets in a doubleheader to punch their tickets to the 2021 UIL Class 1A State Baseball Tournament.

Game One was over after the first inning as the Tigers plated six runs in the top of the first on their way to an 8-2 win.

Jagger Qualls got the start for the Hornets and he was rocked early. Jaden Kulms, Keyton Lumbreraz, Dylan Cole and Ryan Pilkington all singled to lead off the game, giving Kennard an early 2-0 lead.

Jacob Catoe grounded out, but on the play, Cole was able to race home from third to extend the Tigers’ lead to 3-0. An infield single from Caleb Alfred moved Pilkington to third and when Cade McDonald tripled, Pilkington – along with Alfred – crossed the plate to make the score 5-0.

After Adrian Montero fanned for the second out, Elijah Dowdy lofted a fly ball to shallow left that was misplayed for an error, allowing McDonald to come home and pushing the lead to 6-0.

Kulms, who led off the inning, was up next but he flew out to center to end the top of the first and bring the Hornets in to bat.

The Hornets stung the Tigers for two runs in the bottom of the frame, but that was all they would get. Cole got the nod for the Tigers and gave up a lead-off single to Qualls. A passed ball moved him to second but Jacob George was unable to advance him as he flew out to center. Landon Burnett was up next, but fanned on three pitches.

Just when it seemed Cole might get out of the inning unscathed, Riley Halsten ripped a double to left, driving in Qualls from second. Bradley Nordin was up next and he singled to center, driving in Halsten and making the score 6-2. Lex Sly followed in the order, but Cole got him to tap back to the mound to end the inning.

That was it for the offensive side of things until the fifth. In the second and third innings, both teams went down in order while in the fourth, the only baserunner to reach was Sly who drew a walk.

In the top of the fifth, however, the Tigers pushed their lead to 7-2. Lumbreraz led off with a single to left and moved to second when a dropped third strike forced a throw to first to retire Cole. Pilkington followed and moved Lumbreraz to third with an infield single while Catoe drove him in with a grounder through the middle of the infield.

Kennard would go on to add another run in the top of the seventh while Kulms came on in relief to close the door on the Tigers’ Game One win by a final of 8-2.

Thirty minutes later, the two teams were back at it in Game Two. While Game One was decided early, Game Two was decided late as the Tigers put four runs on the board in the bottom of the sixth to pull away from the Hornets and win, 7-3.

Kulms got the start in Game Two and he mowed the Hornets down in order. George was on the mound for Miller Grove and he returned the favor.

In the second, Kulms continued to baffle the Hornets’ batters as he got Halsten to groundout, walked Nordin and then got both Sly, along with Lance Davis, to ground into force outs to end the top of the second.

The Tigers scratched out a run in their half of the inning. Pilkington led off with a K, but Catoe followed with a triple. Alfred was up next and drove in Catoe with a ground out to third. McDonald and Montero followed with a pair of singles, but Kennard was unable to generate anything more as they took a 1-0 lead after two were in the books.

The Tigers began to smell blood as they scored again in the third and fourth while Kulms kept the Hornets at bay.

In the top of the fifth, however, Miller Grove found its offense as they plated three runs to tie the game. Kulms fanned Davis to lead off the inning. Kavan Smith drew a walk and scored when Ethan George tripled down the line in right. Qualls followed with a double to center, plating E. George and making the score 3-2.

J. George sacrificed Qualls to third and when Landon Burnett singled up the middle, Qualls scampered home to tie the game at three. Halsten reached on a dropped third strike, but Kulms regrouped to get Nordin to ground out and end the Miller Grove rally.

The Tigers went quietly in the bottom of the inning but after Kulms retired the side in the top of the sixth, Kennard came roaring back.

Dowdy led off with a single, but Kulms followed with a fly ball out to right. Lumbreraz was up next and he reached on a single to center. Cole grounded into a fielder’s choice and just when it seemed Miller Grove might get out of the inning without any damage, the wheels fell off.

Pilkington doubled to drive in Dowdy and move Cole to third. Catoe drew a walk to load the bases and then Alfred delivered a big blow with a triple to left. The three-bagger drove in Cole, Pilkington and Catoe to make the score 7-3. It also dashed the Hornets’ hopes for a comeback.

After McDonald flew out to end the sixth, Miller Grove managed to get their first two hitters on base but a pair of pickoffs and a strike out gave the Tigers the 7-3 win and sent the Kennard fans into a frenzy as the Tigers advanced to the State Baseball Tournament for the first time in school history.

The Tigers will next play in the State Semifinals at Dell Diamond in Round Rock on June 9. Their opponent and time have not yet been determined.

Let’s all cheer on the Tigers and wish them the best of luck in their quest to bring another state championship trophy home to Houston County!!