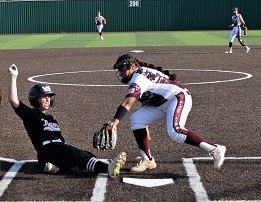 HUDSON – The Lovelady Lady Lions have taken a liking to the Hudson High School softball field. They’ve played well at the home of the Lady Hornets so far in the postseason and have a record of 3-0. Their pitching has been nothing short of spectacular, their defense has been rock-solid and their hitting has been both timely and productive.

Unfortunately, that was not the case on Thursday, May 23 as the West Sabine Lady Eagles defeated the Lady Lions by a final score of 6-0 in Game One of the Regional Finals. While Mimi Sandoval didn’t appear to have her best stuff, she was still effective from the pitcher’s circle. The Lovelady defense, however, committed six errors behind her while the offense only managed two hits and two walks. 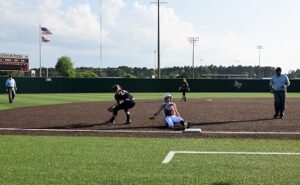 Sandoval was in the circle to start the game for Lovelady and to no one’s surprise she opened the game with a strike out of West Sabine’s Harlee Franklin. Kaleigh Anderson was up next and drew a walk off of her and moved to third on a double from Haley Primrose.

Halli Hall struck out on three straight pitches which brought Emma Frick to the plate. On a 1-2 pitch, a passed ball gave Anderson a chance to score. Lovelady catcher Linda Martinez retrieved the ball and threw it back to Sandoval who was covering home.

In a bang-bang play at the plate, Anderson was ruled safe, giving the Lady Tigers an early 1-0 lead. On the next pitch, Sandoval slammed the door on any hopes of a two out rally as she caught Frick looking at strike three.

The Lady Lions appeared ready to strike back when they came to bat in the bottom of the first. Jacy Stubblefield led off with a single to left. The ball hit just in front of West Sabine’s Anna Metcalf, scooted under her glove and rolled all the way to the wall, allowing Stubblefield to motor into third. 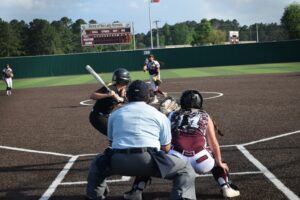 Hannah Spring got the start for West Sabine and after Stubblefield’s hit, she struck out Makayla White. Linda Martinez followed in the order and drew a walk to give the Lady Lions runners at the corners with only one out.

Martinez stole second but Stubblefield had strayed too far off of the bag at third and found herself in a run-down where she was tagged out. Sandoval was in the batter’s box when Stubblefield was caught in no man’s land and after the out, the Lovelady pitcher grounded into a 6-3 force to end the inning.

The second inning featured the pitching of Sandoval and Spring as the two pitchers struck out the opposing side to move the game into the third inning.

In the third, the Lady Lions defense faltered. Susan Muncrief led off with single and moved to second when an error on a sacrifice bunt allowed Franklin to reach first safely. Muncrief moved to third on the play while two pitches later, Franklin stole second.

After striking out both Anderson and Primrose, It appeared as if Sandoval might escape the inning unscathed. Hall was up next and singled to center to drive in Muncrief while an error in the outfield allowed Franklin to cross the plate to make the score 3-0.

Frick followed in the order and reached on Lovelady’s second error of the inning. Hall moved to third on the play but Sandoval got Spring to swing at a pitch out of the strike zone to retire the side.

In the bottom of the inning, Sarah Thompson led off with a pop up to short. Rylee Biedrzycki struck out but Stubblefield reached on an error. She moved to second but was unable to go any further after White struck out to end the inning.

As the game moved into the fourth inning, Sandoval was still dominant. She got both Anna Metcalf and Riley Lane to pop up for two quick outs. Then, she caught Muncrief looking at strike three for the freshman right-hander’s 10th strikeout of the game.

Spring was just as effective for West Sabine. She struck out Martinez and forced Sandoval to ground out to short. 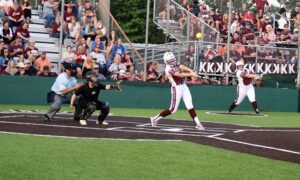 Amber Mikes was next up and drew a walk but Erin Sample followed with a strikeout to move the game into the fifth.

The fifth inning saw Sandoval strike out the first two batters she faced. While Primrose singled, Sandoval came right back to strike out Hall.

When Lovelady came in to bat in the bottom of the inning, the Lady Lions continued to struggle at the plate. Bailee Albinus led off with a pop up for the first out, Thompson flew out to right and Biedrzycki flew out to center to send the game into the sixth inning.

Despite their erratic play in the field, Lovelady was still in the game as they only trailed 3-0 going into the final two innings. Unfortunately for the Lady Lions, three errors in the sixth allowed the Lady Tigers to score three runs.

After that, Lovelady was unable to generate any offense in either the sixth or seventh innings as they fell to the Lady Tigers in Game One by a final score of 6-0.

Spring picked up the win as she pitched seven innings of two-hit softball. She also struck out 10 and walked two.

Sandoval took the loss in seven innings of work. She gave up six runs – none earned – on six hits, struck out 12 and walked one.

Game Two was scheduled for Friday, May 24 but as of press time the score was unavailable. 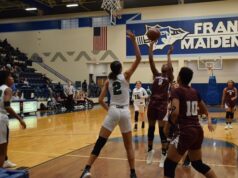 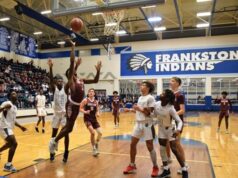 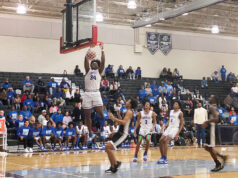