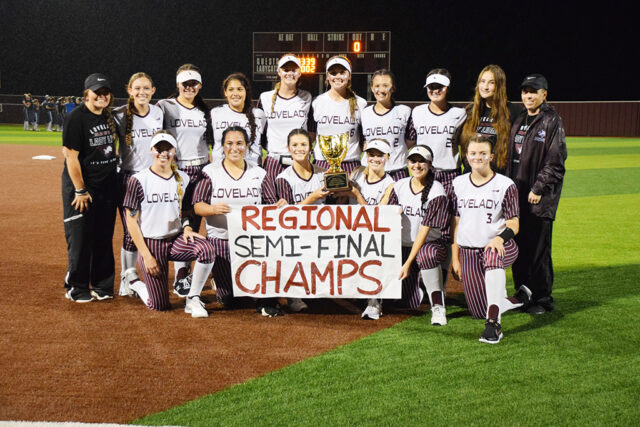 WHITEHOUSE – On a dark and stormy night, the Lovelady Lady Lions outlasted the rain and the Como-Pickton (CP) Lady Eagles to advance to the Regional Finals. Lovelady’s margin of victory, 18-7, was in no means indicative of the actual closeness of the game, but in the end, it is the Lady Lions who are moving on.

Lovelady opened the scoring in the first inning as Scout Lovell reached on an error and scored on a bunt from Morgan Womack to give the Lady Lions an early 1-0 lead.

Macie LaRue was in the circle to open the game for the Lady Lions and after a leadoff single to Faith Watkins and an intentional walk to Mattison Buster, LaRue retired the next three batters she faced to close out the first inning.

Buster was back in the circle for the Lady Eagles on Friday night after losing a heartbreaker the night before. She had the Lady Lions number in the early innings of the game and she mowed down the Lovelady batting order in order in the top of the second.

When CP came in to bat, the rain began to pick up a little and the Lady Eagles used that to their advantage as they plated four runs. After two quick outs, LaRue ran into trouble. A single, a walk and a pair of passed balls had CP primed for a big inning.

A walk to Buster tied the tie game as Harley Perez scored from third. Back-to-back passed balls brought in two more runs as the Lady Eagles opened up a 3-1 lead. A third passed ball allowed Kara Tifft to score but LaRue was able to fan Addi Monk to close out the second.

Lovelady clawed back a run in the top of the third to cut the lead to 4-2. Lovell walked to lead off the inning and stole second. After a groundout from Jacy Stubblefield, Lovell stole third. Mimi Sandoval was up next and slapped a shot to short. Lovell was running on the pitch and crossed the plate while Sandoval was credited with a sacrifice. That was all the Lady Lions would get in the third, however.

After a quiet bottom of the third from CP and a three-up, three-down top of the fourth for Lovelady, the Lady Eagles plated another run to extend their lead to 5-2. Buster walked and Tifft came in as a courtesy runner. She moved to second on a passed ball and then stole third. An infield error allowed her to scamper home, but Sandoval, who relieved LaRue in the circle, retired the next two batters she faced to end the inning.

As the rain continued to fall, the Lady Lions made their move. Buster, who will receive All-State consideration after the season, appeared to have trouble with her pitches as the rain began to affect her grip.

Makenna Pierce led off the inning and reached on a dropped third strike. An error at first allowed Pierce to race around to third and she scored on a passed ball. Back-to-back walks went no where as Lovell and Stubblefield were called out on the base paths trying to steal.

Sandoval followed with a single and moved to second when Linda Martinez drew a walk. Morgan Womack was up next and reached base on a dropped third strike. On the play, Macie LaRue, who came in as a courtesy runner for Sandoval took third and when the throw to first was wide of the bag, LaRue scampered home to make the score 5-4. Martinez advanced to third on the play and when Buster uncorked a wild pitch, Martinez crossed the dish with the tying run.

Buster regrouped to strike out Haven Prager but the damage was done as the Lady Lions had knotted the game at five.

When the Lady Eagles came into bat, they were unable to generate any offense. Alyssa Corona drew a walk. Hannah Pegues fanned and when Corona attempted to steal second, Martinez gunned her down from the catcher’s position. Summer Gilbreath followed with a single, but Sandoval came back to strike out Watkins on a full count to end the fifth inning.

In the sixth, Lovelady broke the game wide open. Following a pair of quick outs, Pierce and Lovell both walked. Stubblefield followed with a single to shallow center to drive in the base runners and give the Lady Lions their first lead since the second inning.

At this point, Buster simply couldn’t find the strike zone and walked three in a row. The third walk pushed Stubblefield across the plate and made the score 8-5.

After finally retiring Prager to end the Lady Lions at-bat, CP was unable to do anything offensively, bringing Lovelady back in from the field.

That was when the bottom fell out. Erin Sample walked on four pitches and stole second. Rylee Biedrzycki struck out but a dropped third strike allowed Sample to race home and make the score 9-5. Pierce, Lovell along with Stubblefield all walked and then the rain became so intense the game was halted.

Thirty minutes later, when play resumed, Buster was pulled and Monk came into pitch for CP. She hit Sandoval pushing Pierce across the plate and then Martinez singled to center driving in Lovell and Stubblefield.

It didn’t get any better from there as the Lady Lions almost batted around twice as they scored 10 times to take an 18-5 lead. The Lady Eagles scored twice in the bottom of the seventh to cut the lead to 18-7 but it was too little, too late as Lovelady cruised to the 18-7 win and advanced to the Regional Finals.

District 20-2A Boys’ All District Selections Released
Are You Ready for Some Football?
A Day at the Races