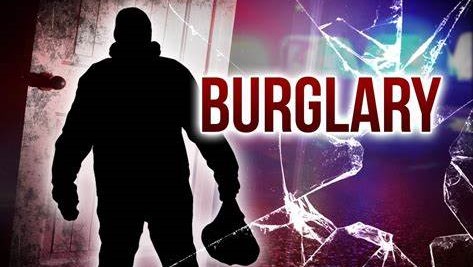 CROCKETT – For the third time in the last four months, Smitty’s BBQ – located at 804 S. 4th St. in Crockett – has been burglarized.

According to information received from Crockett Police Chief Clayton Smith earlier this week, “On Jan. 24, Officer Brent Baldwin with the Crockett Police Department was patrolling in the 800 Block of South Fourth Street when he noticed the front door of Smitty’s BBQ shattered.”

After discovering the fragmented front door, Officer Baldwin made contact with the owner of the business and told him what he had observed.

The owner agreed to meet the police at the restaurant and review the establishment’s surveillance video.

While reviewing the video footage, officers “…  observed what appeared to a be a male subject wearing dark clothing, gloves and a mask break the glass in the front door and make entry into the business,” the police chief stated.

The video showed the suspect going to the cash register where he took approximately $15 in change. He then left the business through the busted-out front door, but returned approximately one hour later at 5:30 am.

Smith indicated, “The suspect re-entered the business and went back to the register as if he was looking for something. Soon after that, he left the premises again.”

The police chief indicated CPD had developed information regarding a possible suspect. He cautioned, however, investigators were still trying to confirm the information to determine its validity.

Smith added it was his belief – after reviewing the video footage – the suspect responsible for the Jan. 24 burglary was also responsible for a burglary that occurred at the same location in mid-December. During the two burglaries, the police chief reported, the suspect wore the same type clothing and appeared to have the same mannerisms.

“This is the third time in four months that Smitty’s BBQ has been burglarized,” Smith stated. “The business was hit back on Sept. 24, 2020 when two suspects entered the business and took both cash registers from the business with several hundred dollars taken. One of the two suspects from that burglary has been arrested and charged. Evidence from that burglary has been sent to the DPS (Department of Public Safety) lab for identification purposes. We are still awaiting those results. It is unknown – at this time – if the first burglary is connected with the last two. As the investigation continues, investigators will attempt to determine the relation if any.”

Anyone with information regarding these burglaries are asked to contact the Crockett Police Department at 936-544-2021 or Deep East Texas Crime Stoppers at 936-639-TIPS.