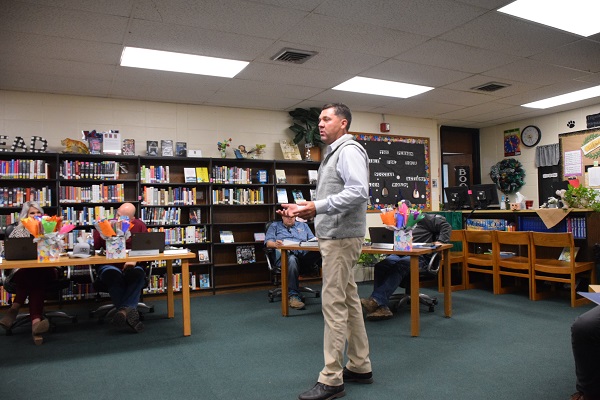 LATEXO – The Latexo Independent School District Board of Trustees met in their regularly scheduled monthly meeting on Thursday, Jan. 14 which was highlighted by a discussion of the district’s 2019-2020 audit, the naming of a construction manager-at-risk and the approval for the issuance of bonds.

Once the meeting was called to order, the trustees were recognized for their service to the district as part of School Board Appreciation Month. They were presented with tokens of appreciation from the elementary students while students in the Latexo FFA represented the high school and expressed their thanks for everything the board members do for the district.

Following the board recognition, the first item of business was an overview of the district’s financial audit for the 2019-2020 school year.

Dan Raney, with the accounting firm of Goff and Herrington, PC was on hand for the meeting and said his firm had issued an unmodified opinion on the district’s finances, which is the highest opinion available.

Raney also informed the trustees the district’s fund balance was $1.118 million “… which is right there where TEA (Texas Education Agency) says you should be. The optimum fund balance is about three months of general operating expenditures.”

As the meeting continued, Stephen Berry, VP of construction firm of Berry and Clay, provided those in attendance with a presentation on the scope of construction previously approved by the board.

Berry showed a montage of the various construction projects his company had managed which included Slocum, Union Grove and Coldspring ISDs.

Berry said he felt the groundbreaking would be around the first part of the summer – if not sooner – and would take approximately 12 to 13 months to complete.

Following the construction presentation, the board approved Berry and Clay as the Construction Manager-at-Risk by a vote of four in favor and two abstentions.

The next item of business concerned the adoption of “… an order by the Board of Trustees of LISD authorizing the issuance of Latexo Independent School District Unlimited Tax School Building Bonds, Series 2021.”

Lucas Janda, the Managing Director at Live Oak Public Finance, LLC, walked the board through the bond process. He said five banks had contacted his company about the bond. The five who made contact were: Pinnacle; First National Bank of Huntsville; Prosperity Bank; Capital One; and Amegy Bank.

After viewing the proposals, Janda recommended going with FNB of Huntsville because they appeared to have the best terms. The board unanimously approved the adoption of order, based on Janda’s recommendation.