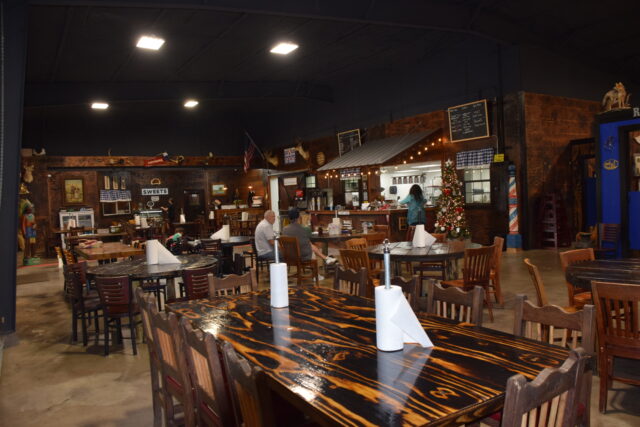 CROCKETT – The Crockett restaurant scene welcomed its newest member to the fold earlier this month as Mimsy’s Craft Barbecue, LLC opened its doors to the public.

Just before Thanksgiving, owners Kathy and Wade Elkins took a break from the hectic pace of getting a restaurant off the ground to speak with The Messenger about how the restaurant came to be and what to expect from the eatery.

“Kathy and I have been in the restaurant industry for a long time and we knew we wanted to do something together,” Pitmaster Wade Elkins explained.

The couple originally stated off with a small, catering concept which would serve various establishments and provide catering to provide events.

“Eventually, we had the opportunity to come here and open up Mimsy’s. Originally, the concept was going to be called My Yard Reaction Barbecue. That was sort of a pun, or play on words, I came up with to reference the backyard cooking I taught myself. Through that process I learned about Dr. (Louis Camille) Maillard (pronounced – my yar) who was a French scientist. He learned about what made the flavors of cooking and that is called the Maillard Reaction. I thought it was kind of cool to make that play on words,” he said.

According to the website www.seriouseats.com, “The Maillard Reaction is many small, simultaneous chemical reactions that occur when proteins and sugars in and on your food are transformed by heat, producing new flavors, aromas, and colors.”

“Now, when we were coming up with names for this place, Chuck (Spellman) was kind of like ‘Mehhhh. Maillard Reaction would have to be explained to everybody and it doesn’t have a genuine, hometown feel.’ He suggested we do a family name,” Elkins said.

The pitmaster said the two were kicking around names when they came upon the name of Mimsy.

“My grandfather, his mother was named Alice and all the grandchildren called her Mimsy. I brought up the name of Mimsy’s to Chuck and my mom (Kim Spellman) and Chuck said that was exactly what he was thinking. It’s something that has a hometown feel. It’s something that is genuine and it’s a family name. So, we went with Mimsy’s,” he said.

Asked what Elkins meant by the phrase craft barbecue, Elkins explained, “I would say we pay more attention to detail with our seasonings, the way we trim our meat and the way we smoke our meat. We use a live, wood-burning fire and we smoke the meat in 12-hour shifts. There is no pellet smoke or gas assist.”

“All of these accoutrements have acidity, sweetness and crunch, which all complement rich, fatty flavors. You need all these accoutrements to knock down the flavor a little bit. Pickles and onions have always provided this, but the craft is the attention to detail, thinking outside of the box and providing a few more accoutrements for the smoky, fatty meats,” he elaborated.

Other areas of the craft barbecue include the freshness of the product, high-caliber customer service and the experience when a patron walks through the doors of the restaurant.

As to what type of wood he uses to smoke his meats, Elkins indicated he uses post oak.

He went on to say, “That seems to be the most popular type of wood in Texas right now and it’s for a good reason. Wood smoking will usually be post oak, pecan or mesquite here in Texas. Post oak is middle of the road. Mesquite and pecan tend to have a higher burning point and produce a lot more heat. It will be a hotter fire while post oak tends to be more subtle.”

Concerning the menu, Elkins said for any barbecue restaurant trying to make a name for themselves in the Lone Star State, the restaurant’s brisket, sausage and ribs need to be “on point.”

“That is considered as the Texas Trio,” he said. “Any barbecue enthusiast or critic who walks through our doors, those will be the first things they order. Now, as far as specialties go, our smoked turkey is extremely popular. My favorite menu item right now is the smoked half-chicken. We have put a lot of effort into that. We marinate that for 48 hours with herbs from our garden with seven or eight different seasonings.”

Make no mistake, Wade is no weekend warrior on the barbecue pit. He has served as the Assistant Pitmaster at Feges BBQ and as a Pitmaster at Reveille Barbecue Co., both of which have been named to the Texas Monthly Top 25 New Barbecue Joints in Texas

Kathy is not just along for the ride, either. She is a formally trained executive chef who has honed her talent under the guidance of several well-known chefs in the culinary world. She received her culinary degree from the Art Institute of Houston. She has served as the executive chef at Woodforest Grille, the executive chef at Harold’s in the Heights and a kitchen manager at giacomo’s cibo e vino.

In addition, she was named as the September 2018 Chef of the Month in Houston.

For more information please visit their website at www.mimsyscraftbbq.com or call 936-544-7000.