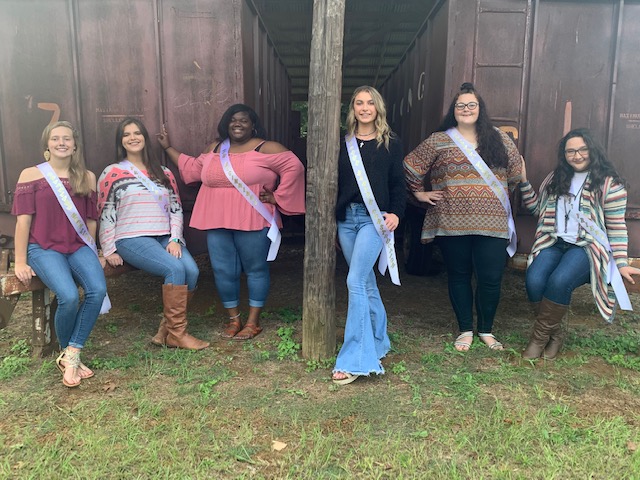 GRAPELAND – The lights will dim, a drum roll will be heard and the seconds will become hours. Then, after what might seem like forever, one lucky young lady will be crowned as the 2020 Peanut Queen.

In normal years, tears of joy would be shed, hugs would be exchanged and thunderous applause would roll throughout the Lorena Schultz Auditorium as the Annual Peanut Festival came to a close. But, as this year has unfolded, 2020 has been anything but normal – to say the very least – so it should come as no surprise that this year’s pageant will be quite different than those of Octobers past.

The 2020 Queen’s Coronation will mark the 75th year of the competition and was set to be a full-blown gala of glitz, glamour and pageantry. COVID-19, unfortunately, has changed those plans.

Very nearly thrown into the scrap heap of so many other cancelled events in the area, the Grapeland Chamber of Commerce pulled the Queen’s Coronation from the ashes. Unlike the proverbial Phoenix, this year’s version will not be able to soar to the heights originally planned due to an anchor of protocol implementation in the ongoing effort to limit the spread of COVID-19.

Seating will be limited to 15 guests per contestant and parts of the program have been eliminated entirely. In addition, several areas of the competition will not be performed live, but will be videotaped instead.

Still, as they say in the world of entertainment, the show must go on and go on it will!

Prior to a rehearsal on Wednesday, Sept. 23, the sensational six took time to speak with The Messenger. All six were asked the same questions and while many of their answers were similar, a few were distinctly different. The six young ladies all expressed preparation for the show was difficult, but all agreed it was a fun experience because – among other things – it provided an opportunity for them to get to know one another a little better.

The six young ladies were asked: 1) who their sponsor was; 2) why did they decide to run for the 2020 Peanut Queen’s crown; 3) what it would mean to be crowned as the 2020 Peanut Queen; 4) what talent would they be showcasing; 5) how had COVID-19 affected their preparations for the pageant; and 6) what their plans were after graduating from high school.

Leading off the interviews was Arionna Davis, Miss New Beginnings.

As to why she decided to run, Arionna said, “It was something I just always wanted to do.”

Arionna said she will showcase her talents with a rendition of the song “Hallelujah.”

If she were to be crowned as the 2020 Peanut Queen, Arionna expressed, “It would mean everything.”

Asked for her thoughts on the Coronavirus, Arionna said, “It has affected me a lot because we really can’t go many places or do many things. It also really puts a damper on us experiencing everything together. It seems like the girls in the past were able to do a lot more. It’s also prevented us from enjoying our time together without having to worry about all of the safety precautions.”

After she graduates in May, Arionna said she plans to attend either Sam Houston State University or the University of Mary Hardin Baylor in order to work towards her doctorate in education.

Stacy Perez, Miss Best Friends Community Services, was the next contestant for the 2020 Peanut Queen’s crown to discuss the pageant.

She said her talent this year will be “… kind of like a Broadway production. I will be singing ‘When Will my Life Begin?’ from the movie ‘Tangled.’ It’s an animated Disney movie that tells the story of Rapunzel.”

As to why she chose to run for Peanut Queen, Stacy said, “I have lived in Grapeland my entire life. I have seen all these Peanut Queens and all of these pageants and I thought it looked like the most fun thing in the world. I have been working backstage on the pageant for three years and I just thought it would be a fun experience.”

Concerning the COVID-19 pandemic, Stacy explained, “COVID-19 has been a bit stressful because you don’t not what the next thing is you will have to deal with. This (event) might get cancelled and you really don’t know what’s going to happen the next day. You don’t know if you will get it or someone else will. You just don’t know. It’s the whole matter of not knowing.”

After she graduates in May, Stacy said she plans to attend college “… at Texas A&M and getting my degree in finance.”

The third contestant was Macy Cutler, Miss Callaway-Allee Funeral Home who said she will be singing a song by Francesca Battistelli entitled “Angel By Your Side.”

If she were to be crowned as the 2020 Peanut Queen, Macy expressed, “It would mean a lot to me, honestly. If I was to win, it would mean that I have something special about my name. In this world and in this hard time, it means that I could do something great.”

As far as how the pandemic has affected her, Macy said, “It has been very stressful. It hasn’t been necessarily hard, but it’s just been really stressful.

Following her high school graduation, she indicated she plans on attending college to “… go into child development so I can work as a daycare director. Right now, I’m looking at Angelina College.”

Up next was Cierra Espinoza, Miss Frontier Camp.

When asked what her talent for this year’s competition would be, Cierra replied, “I will be doing ASL (American Sign Language) to the song ‘Hallelujah’ by Pentatonix.”

AS to why she decided to run for the for the chance to be crowned as the 2020 Peanut Queen, Cierra expressed, “I have always been a proud citizen of Grapeland and as a proud citizen of Grapeland, you always go to the Peanut Festival. I have always enjoyed watching the Queens get up there and dress up. They are always very pretty. As a little girl, I thought that was so cool.”

She continued, “In the past four years, I have helped out backstage with the coronation working with the props and sound and I have just really looked forward to doing this.”

If she were to be crowned as the 2020 Peanut Queen, Cierra said, “I would be very proud because it’s something I didn’t think I could do. Me, I’m not really the coolest cat in school. I’m also not the most girly, if I’m being honest. But – I really do love my town and I love that I would be able to represent it in a way I haven’t been able to do so before.”

Concerning the affect COVID-19 has had on preparations for the coronation and on her personally, Cierra explained, “I think the main way this has affected us is through the fear of not knowing what is going to happen next. At any moment, this could be cancelled even with all the precautions we are taking. We don’t get to do the parade, we don’t get to experience the whole coronation as it would be and we don’t get to have that many people come to the show. That’s really sad.”

Cierra said she has already been accepted by Texas A&M “… and I want to study recreation, parks and tourism. I want to get my Masters in that and after I graduate from A&M, I want to go to Southwestern Baptist Theological Seminary and get a Masters in Biblical counseling. Then, one day, I would like to work at a Christian camp.”

Cheney Boyd, Miss George Bartee Construction, was the next Peanut Queen contestant to discuss her reason for entering the pageant.

If she were to be crowned as the 2020 Peanut Queen, Cheney expressed, “It would mean a lot to me because I would be able to represent our town as the 75th Annual Peanut Queen. I think it would also give the younger girls someone to look up to.”

Cheney said she will be performing a skit called “Funeral Fried Chicken.”

“Dealing with COVID-19 has been very stressful and difficult,” Cheney said when asked how the pandemic has affected her. “We are all having to come in at different times to get prepared and we don’t know what is coming next. We’ve had to change things up because of it. Wearing the mask is a big thing. Mostly though, it’s the fear of the unknown which is a big thing for us.

As to her future plans, Cheney said, “After graduation, I am planning to pursue a degree in anesthesiology and to attend UT-Tyler to play golf.”

Last, but certainly not least, was Mary Jane Watson, Miss Grapeland Noon Lions Club, who said she was also performing a skit. Her skit is called “One Game of Golf.”

When asked why she decided to run for Peanut Queen, Mary Jane said, “I decided to run so I could be a part of the tradition in our town and to make memories with my classmates.”

If she were to be crowned as the 2020 Peanut Queen, Mary Jane smiled and said, “It would mean a lot because I could be a part of the history and I could be a role model for the younger girls.

As to how the spread of COVID-19 has affected her, Mary Jane said, “With not having the parade and with the park events being cancelled, I feel like it has taken away from the pageant. With the guidelines, it has made our preparations much more stressful because we have to work within those.”

“By the time I graduate from high school, I will have obtained my Associate’s Degree. I plan to get my Bachelor’s in education, in hopes of becoming a Jr. High math teacher,” Mary Jane said.

The Messenger staff would like to wish all the contestants the best of luck as they compete for the title of Miss Peanut Queen 2020 and in all of their future endeavors.