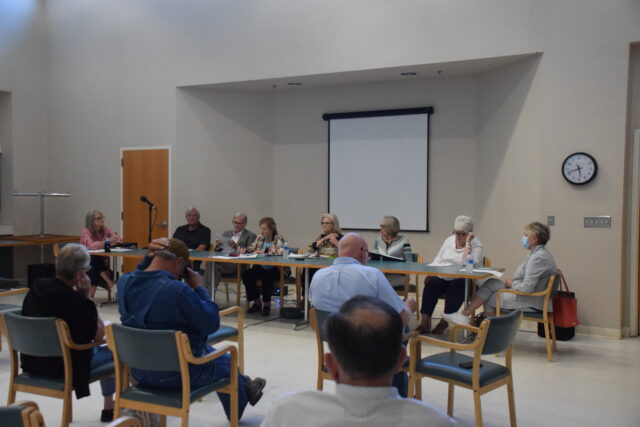 HOUSTON COUNTY – The Houston County Hospital District Board of Directors took action to begin the process of replacing a pair of cooling towers at Crockett Medical Center during their regularly scheduled meeting held on Tuesday, June 15.

HCHD President Barbara Crowson said the facilities committee and finance committee had recently met with CMC leadership about the cooling towers. She also asked Facilities Committee Chair Harvey Bruner for his take on the matter.

“We were shown the towers and saw the condition of the equipment. We talked about the expense to repair it and the necessity of doing so,” Bruner said.

Finance Committee Chair Rhonda Brown added, “We discussed the installation of coolers and working out a payment plan with CMC that follows the HCHD contract agreement.”

Once Brown concluded, Crowson said there were three cooling towers at the hospital and two of them were in desperate need of repair/replacement. She explained she had gone back to look at reports on the towers prepared by former HCHD Board Member Erin Ford.

“He looked up the cost to replace one and it was $100,000, at the time,” she said. “When the finance committee and facilities committee met with the hospital administrator (Tommy Johnson), he shared with us at that time, the projected price to replace two of those cooling towers. The problem is – without those working properly – it is nearly impossible to get the operating room suite cool enough to do surgeries. There have been times over the last few months where they have had to cancel surgeries because the temperature (and humidity) would not stay down.”

Crowson went on to say Johnson had started the process to buy two new towers at a combined price of $183,494.

As she continued, Crowson explained the lease agreement between the HCHD and CMC stated any capital expense over $100,000 allowed for the HCHD to assist in paying for the expense as long as CMC reimbursed the HCHD.

“What I am proposing to our board – because it is a large capital expense – is that we share in the cost of the cooling towers for that amount which is over $100,000. I think it would be the right thing to do,” she said.

A motion was made and seconded to provide CMC with the $83,494. When the floor was opened for discussion, Board Member Dina Pipes said while she was not opposed to providing CMC with the needed funding for the towers, she would like to see an itemized breakdown of the expenses.

“Before we vote and decide on an exact amount, we need to see some invoices and records of what is actually being done. Then, we can decide how much money we can help you with,” Pipes said.

She went on to say she felt the matter should be tabled until the documentation could be provided.

Brown added, “I believe we need to table this as well, simply because we don’t know anything about guarantees or warranties. We have not had an open discussion with all nine board members? Does anybody know exactly what we are doing here? We are saying we are going to $83,000 to help without them reimbursing the district even though our contract says if it is done as a capital expense, it has to be done where they have to reimburse the district.”

Brown went on to express her desire to help CMC with the payment, but wanted to see the invoices and where the money was going first.

The motion was amended to share the expense of replacing the cooling towers, in an amount not to exceed $83,000 and when the vote was taken, the results showed five members in favor of the motion and three (Brown, Bruner and Pipes) against.

Brown and Pipes stressed they were not against helping out CMC with the cost of the cooling towers, but would like to see itemized expenses associated with the purchase before doing so.

Prior to the cooling tower discussion, CMC CEO Tommy Johnson provided the board members with the monthly hospital report for May.

Johnson reported, “For the emergency department, we had 686 visits this month. It is starting to normalize around that 700 mark where we have always been. Our rural health clinic had 174 visits. The specialty clinic had 170, so in the clinic setting we had a total of 344 visits. The surgery department did 52 total procedures. Outpatient lab and radiology did 1,267 registrations. For the month, we had 17 admissions which created 50 stay-days. We had 1,019 observation hours and we had four swing-bed admissions.”

He added, “We are kind of getting back to where people are getting out to seek healthcare again, after COVID-19. I don’t know the number, but we have done vaccine after vaccine. We have done at least 300. We had 300 allocated doses. It’s been good. We have had a lot of people coming in for vaccines.”

The facilities committee will be comprised of: Harvey Bruner (chair); Roy Langford; and Dr. John Stovall.

The ambulance committee will be comprised of: Dina Pipes (chair); Harvey Bruner; and Debbie Kelly.

The finance committee will be comprised of: Rhonda Brown (chair); Pam Ainsworth; and Barbara Crowson.

The nominations committee will be comprised of: Carol Dawson (chair); Pam Ainsworth; and Rhonda Brown.

The negotiations committee will be comprised of: Barbara Crowson; Carol Dawson; and Dina Pipes.