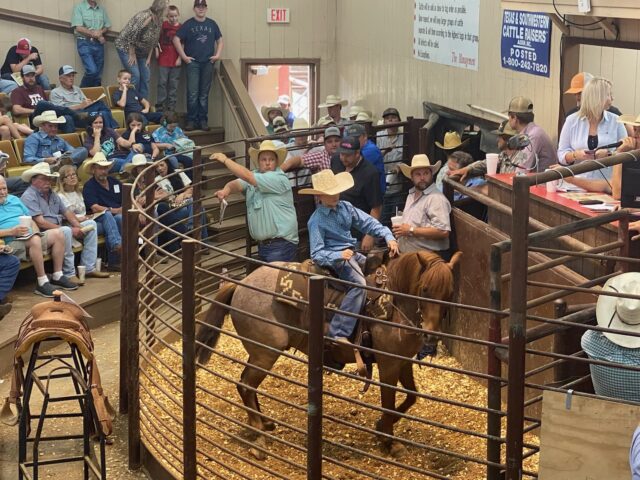 ANDERSON COUNTY – After being shut down in their efforts to hold a horse sale earlier this year, last Saturday, May 23, the Anderson County Livestock Exchange (ACLE) brought the equines back and by all accounts the sale was more than successful.

“It was nothing short of phenomenal,” co-owner Kirk Smith said. “And that was in the middle of this Coronavirus. There’s no telling what we might have done had it not been for that. It went better than I thought it would I was pleasantly surprised.”

Smith said Saturday’s affair saw 124 horses being sold in addition to a fairly successful tack sale prior to the main event.

“We limited the tack sale. I have been to other auctions where they will sell tack for four or five hours. We said it’s going to be two hours and then we’re going to shut it down. We did tack from 12 to 2 pm and about 2:15 pm we started the horse sale. I think we finished about 7 or 7:30 that night,” he said.

The money the horses brought was staggering, according to Smith.

“I’ve never seen anything like it on prices. I tried to buy three horses and I was outbid on every one,” he laughed. “I was amazed. The restaurant was packed and we got good reviews. People on Facebook were asking when we were going to do it again. I can’t describe it. I was shocked. I thought we might do half of what we did.”

ACLE Marketing Director Jacqueline Porter said they even sold six horses online and added buyers came from all over the United States.

As to what Smith saw that he liked about the sale, he said one of the things he liked best were the people.

“People spent the night here in their horse trailers. The people were just amazing. They were some of the best people you will ever meet. Everybody seemed to have such a good time. We gave popcorn and drinks away before the sale and we didn’t get any negative feedback whatsoever. It was our first sale and of course it could have run a little smoother,” he said.

While he liked the way it flowed, Smith added he had plans to make a few changes.

“We are going to make some changes to the facility to help facilitate future sales. I don’t know how quick we can get that done, but we are working on it right this minute. I think it was wonderful for the county. I think it added a lot of revenue to the county, not just for our business but for others,” he said.

Based on the success of the ACLE’s first horse sale, Smith said he was looking at an August timeframe for another catalogue sale, but said they hadn’t firmed up a date as of yet.