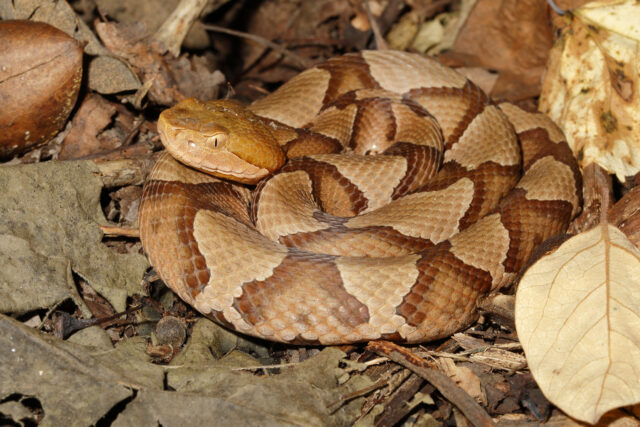 EAST TEXAS – Whether you’re ready or not, summertime is here. The warmer weather and a desire to get outside will see more people working in their yards and enjoying the great outdoors.

As people start moving about, however, they need to be cautious about snakes. With the decreased lack of outdoor activity over the past two springs, many snakes were allowed to roam unfettered through their natural habitat, meaning there could be snakes where there are normally not any.

As temperatures begin to climb, local residents are cautioned to be wary of the slithery reptiles. In addition, the relatively mild winter and warm weather conditions experienced this spring in East Texas – coupled with the start of mating season – will likely produce an over-abundance of snakes.

“Last year, several news organizations reported an increase in the number of venomous snake bites in Texas and other states like North Carolina and Georgia. Rapid urbanization and higher-than-normal amounts of rain were blamed for the spike in bites,” according to wildlife specialist Dr. Maureen Frank, with the Texas A&M AgriLife Extension Service.

Because snakes are cold-blooded, many times the reptiles will try and warm themselves on roadways, sidewalks and other sun-baked areas. Texas Parks and Wildlife officials caution people working in their gardens or in their yards and flowerbeds to keep a close eye on where you put your hands and feet. Also, picking up yard clippings, downed limbs and trash will help greatly reduce the places where snakes tend to hide and consequently keep the number of snakes around your home to a minimum.

As spring rolls into summer, snakes change their behavior patterns. During the early morning hours, snakes try and catch a few rays of sunlight to warm up. But as the sun rises in the sky, snakes retreat to the shade.

Snakes are integral to Texas’ array of regional ecosystems. While many Texans view them as a dangerous pest, they are an important predator of insects and animals.

There are around 75 snake species in the Lone Star State, but only about a dozen are venomous. As many as five of these poisonous creatures like to call East Texas home. Coral snakes, copperheads, water moccasins (cottonmouths), diamondback and timber rattlesnakes all enjoy our part of the state.

Even though most species are non-venomous, Frank said her best advice is to avoid contact with any snake. Snakes are typically not aggressive and will typically escape an area if they hear someone approaching.

Frank said the best ways to avoid snake bites is to watch where you step or reach and to keep your distance if you see one.

“When you encounter a snake, it’s best to just leave it alone,” she said. “Most bites occur when a person is trying to handle the snake or trying to kill it. It’s best to give them plenty of room and let them go on their way.”