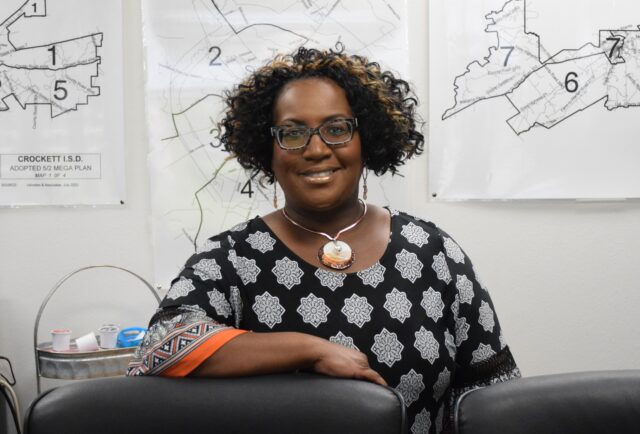 CROCKETT – The retirement of Crockett ISD Superintendent Terry Myers created a ripple effect through the district.

After a search was conducted to fill the superintendent vacancy, the CISD Board of Trustees decided to stay in-house and elevated CISD Assistant Superintendent John Emerich to the position.

Moving Emerich in to the district’s top educator role, however, left a vacancy in the district’s assistant superintendent position. Another search was conducted and on Monday, April 27, the CISD Board of Trustees announced Chanel Howard-Veazy had accepted the position.

“We did a statewide search and we had over 25 people apply. It was a very well sought-after position and Chanel rose to the top,” Emerich said.

On Wednesday, April 29, the newly hired assistant superintendent spoke with The Messenger about her background, how she came to Crockett and what her educational philosophy was.

“I’ve been in education 27 years,” she began. “Prior to my current assignment, I was in the Sealy Independent School District where I had served as an elementary, middle school and high school principal.”

Howard-Veazy said after having worked at different campus levels, she and her husband “… talked about it and decided to use some of the degrees I had been paying money for. I received a position in Sealy ISD as an Executive Director of Curriculum and Instruction as well as the district’s testing coordinator.”

Sadly, during this time, her husband passed away.

“To be frank, I was lonely. I’m originally from Louisiana and wanted to move closer to my family. My grandmother, aunts and uncles live in Shreveport while my parents and sisters live in Monroe. There was a job opening that happened to be closer to home and that led me to Tyler. Now that I have been there for three years and a lot of healing has taken place, I’m ready to resume the career path I was on – prior to life happening,” Howard-Veazy explained.

The newly hired assistant superintendent said she began to look around at area school districts and explore areas where she believed she would be a good fit.

“Crockett felt most like home. I’m from Delhi, La. We are a 1A very rural school district and Crockett has that same kind of home feel to it. Plus, it’s not too terribly far from my family,” she said.

In addition to the hometown feel, Howard-Veazy said the appeal of working in Crockett was also based on “… the welcoming nature of the people and the superintendent. His zeal and passion – I could see that we could share a vision and work well together. That’s very important to me. You want to be able to clearly hear what someone is saying to you and at the same time you want to be heard, as well.”

Changing gears somewhat, Howard-Veazy was questioned about the challenges she saw when schools across the state were allowed to re-open.

She was also asked about her initial reaction to learning schools had been shuttered for the remainder of the 2019-2020 school year.

Howard-Veazy said, “Shocked. It was a realization that this was real, but in your mind you still have hope or a belief that this will pass and we would be able to return to normal. I was also saddened. I was saddened by just how devastating the pandemic is or could become if we are not even able to assemble at school. Church and school, since the beginnings of civilization – people learned to read so they could read the Bible. There have been churches and schools for as long as anyone can remember. I am also hopeful for the return of some semblance of normalcy.”

Concerning the soon-to-be Class of 2020 graduates, the assistant superintendent said she would like for them to be encouraged.

“I want them to be encouraged and look to the future. Trouble doesn’t last always but to indeed to continue to look forward to the rest of the things life has to offer. I would say to them I am so terribly sorry and saddened by the loss of these milestone – the prom, graduation – these things they haven’t had a chance to experience. I would also ask then to take heart and know there will be better things to come. They will never get this back again. I don’t know that there are words which could truly express what they must be dealing with. I would also ask them to please look into the front window and not the rear-view. Know that the front is so much larger than when we look in the rear-view mirror. There is so much more that is yet to come,” she said.