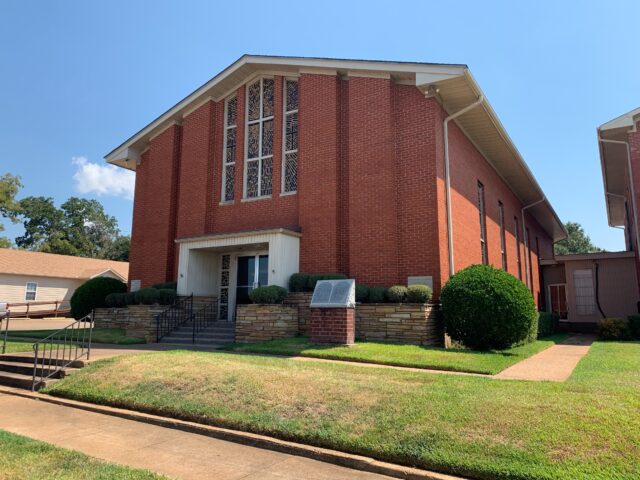 CROCKETT – The year was 1949. Harry S. Truman was president and Sam Rayburn was the Speaker of the House of Representatives.  NATO was created, “Hopalong Cassidy” was aired for the first time on NBC and in Crockett, Texas, eight couples got together and created Central Baptist Church.

On Friday, Sept. 6, Pastor John Goss took time to speak about the church’s upcoming celebration and provided a bit of history on the religious establishment.

“First Baptist Church used to own the lot where our church and the funeral home (Callaway-Allee) are located. There was a big sanctuary that had a dome on it and that building burned to the ground,” the minister said.

When that happened, Brother Goss said, First Baptist Church moved to their present location. The building next to the sanctuary, called the Education Building, was sold to a group of congregation members who believed the church should move in a different direction.

“They had a revival over at First Baptist Church,” Goss continued. “This was in 1949. A lot of people were saved and there was a lot of activity so the younger men went to the pastor. He told them we just can’t have a revival every day.”

As a result, the younger men purchased the aforementioned building from First Baptist Church and met in the basement from 1949 until 1956.

“The new building, the sanctuary, was built in 1956 and it’s our present sanctuary today,” Goss said.

“I think I am the 14th pastor. They went through several pastors – with most of them staying about three or four years. The last pastor was Brother Charles Goodson. He was there 19.5 years. I’ve been here – Mother’s Day was 21 years,” he said.

Over the years, the physical church has continued to grow. The sanctuary was built in 1956, the annex was built in 1982, the Tunstall wing was built in 1998 and “… last year we just our offices and education building beside the church.”

“We have never been in debt. The church has never borrowed money except from the members. We’ve never taken out a loan to build anything and it is a good strong, conservative Baptist Church,” he said.

From the original eight couples in 1949, the church has now grown to a membership of 511 congregants with approximately 250 active members, Goss said.

As the discussion continued, the pastor was asked about some of the changes he had seen in his 20+ years in the Central Baptist Church pulpit.

“You have a different type of church today. The whole church culture in our nation is changing. Some of the new churches are coming in with a contemporary style. The changes in our community, I guess they fluctuate. For a while, we’ll get younger families and children but right now, we’ve had more senior adults come in, as far as the congregation,” he said.

“I think the culture is a little more lax about things and that kind of distresses me. I’m not in favor of all the laxness. There are some things we have made quite a bit of progress in. Everything used to be illegal if you were a Christian. Wearing the wrong type of clothes and things like that, I was glad to see go away,” he said with a laugh.

One thing he did point to was the deterioration of the two-parent family.

“In our culture today, we have a lot of single parent families. A lot of kids are being raised by grandparents, uncles or aunts. Our families are deteriorating. That’s one of the things that distresses you but you have to keep preaching and receive people just as they are. You just have to try and give them information about God and Jesus Christ. It can make a difference in people’s lives,” he said.

Goss said a lot of young families were struggling with morality, finances, substance abuse and a litany of other issues, but added, “… the church, if we are to have any relevance , we must continue to be there for them and continue to stand up for the teachings of Christ, according to the Bible.”