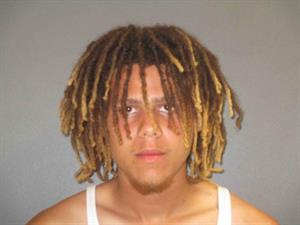 CROCKETT – A 19-year-old Crockett man is in jail after he walked into an acquaintance’s home and began to randomly break items inside the residence.

Castein Austin Corley was taken into custody and charged with burglary of a habitation and resisting arrest after Crockett Police Department officers were dispatched to the 100 block of South Sallas Street in reference to a disturbance.

When CPD Officer Brandan Pollock and Sgt. Andrew Allen arrived at the scene, they met with a male and a female who stated “… the boy (later identified as Corley) in the white shirt over there came into the residence and jumped on (the male),” an affidavit of probable cause stated.

The officers spoke with the male who informed them Corley never touched him.

The affidavit further stated, “Corley walked into the residence uninvited and began breaking stuff in his residence. We (the CPD officers) entered the house and observed broken glass, broken televisions and various other items scattered throughout the living room.”

The law enforcement officials exited the residence and started to look for Corley. The suspect was located and when the officers attempted to talk with him “… he was irate, not wanting to comply with our orders.”

Corley said the male owed him money and refused to pay. As the police attempted to question Corley, the affidavit indicated he kept trying to walk away. Eventually, Corley was instructed to place his hands behind his back.

“Sgt. Allen informed Corley he was not under arrest at this time, (but) he was being detained because he continued to walk away during the interview. While Corley’s hands were behind his back, I reached for my hand restraints and Corley began violently pulling away from me. Sgt. Allen and I then assisted Corley to the ground and placed hand restraints on him,” the affidavit stated.

Corley was transported to the Houston County Jail where he was booked into custody on charges of burglary of a habitation – a second degree felony – and resisting arrest, a Class A misdemeanor.

Corley is being held at the Houston County Jail on bonds totaling $24,000.