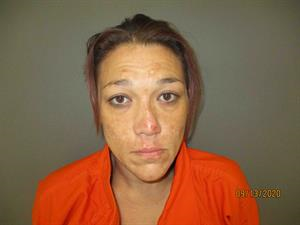 CROCKETT – A routine traffic stop led to the arrest of two people on felony drug charges on Saturday night, Sept. 12.

Angie M. Melerine, 43, and Chance Joseph Sonnier, 28, both from Lake Charles, La. were taken into custody and charged with possession drug paraphernalia and possession of a controlled substance, penalty group one, after the vehicle they were traveling in was stopped for speeding.

According to an affidavit of probable cause, Crockett Police Officer Matthew Millican was on patrol last Saturday when he observed a vehicle traveling at 64 mph in a 55 mph zone. He activated his overhead lights “… to conduct a traffic stop. The vehicle came to a stop on the side of Loop 304, approximately 730 feet away from the Crockett school zone.”

The driver of the vehicle was detained for unknown reasons, but as a tow report was being filled out, both Melerine and Sonnier admitted to having bags in the vehicle.

During the inventory, several illegal items were discovered inside of the vehicle, some were located in the bags belonging to Ms. Melerine and some belonging to Mr. Sonnier.

These items included: four glass pipes known for illegal use, three of which contained methamphetamine; three syringes filled with liquid believed to be illegal narcotics; a larger bag with smaller bags inside; a scale; and a contact lens case containing meth.

“It was later discovered that the amount of methamphetamine weighed a total of 70 grams,” the affidavit reported.

Both Melerine and Sonnier were arrested at the scene and transported to the Houston County Justice Center where they were booked into custody on possession of drug paraphernalia, a Class C misdemeanor, and possession of a controlled substance, penalty group one, in an amount greater than four grams but less than 200 grams, in a drug free zone – a first degree felony.