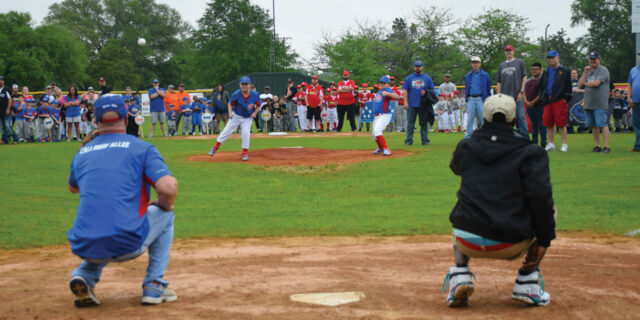 CROCKETT – While severe weather threatened to wash out the event, the Opening Day action on the Little League baseball diamonds promised nothing but sunshine as the 2019 season kicked off on April 13. This past Saturday marked the 65th anniversary of the Crockett Merchants Little League (CMLL) – the longest continuously operating Little League in the State of Texas.

A fast-paced parade through downtown Crockett, replete with fire trucks and police cars, escorted all the Little League teams to Davy Crockett Park for the opening ceremonies. The Opening Day ceremony was emceed by The Messenger’s very own Ansel Bradshaw who welcomed the players, coaches, family and friends to the event.

“This is a very important and fantastic day for the Crockett Merchants’ Little League. Sixty-five years – that is how long the CMLL has been in existence. We would put that up against any other town in the state of Texas,” Bradshaw said.

He then turned the microphone over to Pastor Mike Osborne who led the invocation.

Once the prayer had been given, CMLL President Jamie Allee requested all past and present Callaway-Allee Cubs to join him on the field.

“I would also like to invite my dad, Randy Allee out here. This is pretty special because the Callaway Cubs have the oldest sponsorship in the state of Texas. We’re pretty proud of that and we’ll continue as long as the board allows us to do that,” the younger Allee said.

“I want to thank everyone for coming out today,” he continued. “People have worked countless hours to make this happen. I want to say a special thank you to all the volunteers who have helped us to be successful for the last 65 years.”

A plaque was presented to the elder Allee to commemorate the 65th anniversary of the CMLL.

Following the plaque presentation, the Little League creed was recited by the young ball players.

“I trust in God, I love my country, and will respect its laws. I will play fair and strive to win. But, win or lose, I will always do my best,” the players said in unison.

The parents were also asked to recite the parent and volunteer pledge which states, “I will teach all children to play fair and do their best. I will positively support all managers, coaches and players. I will respect the decisions of the umpires. I will praise a good effort despite the outcome of the game.”

Next, the opening pitches were thrown out by a pair of Cubs

The National Anthem was played and with the threat of rain increasing by the minute, Bradshaw moved directly into the auction part of the program. The first item up for bids was a bat from the Lone Star Co., which used to be based in Crockett.

The winning bid was $1,000 and was won by Jamie Allee who presented it to his father.

The next item was a Texas Rangers baseball package which included four tickets to a Rangers’ game against the Oakland A’s in June. It also included a bat, a glove, several bobble-heads and other Rangers’ swag.

The baseball package was sold to Brad Riemenschneider for $225.

Once the special auction items had been distributed, the annual cake auction began. Unfortunately, only three teams were able to present their cakes.

The cake auction continued, but due to lightning in the area, the players were cleared from the field. The games scheduled for later in the day were cancelled because of the weather.