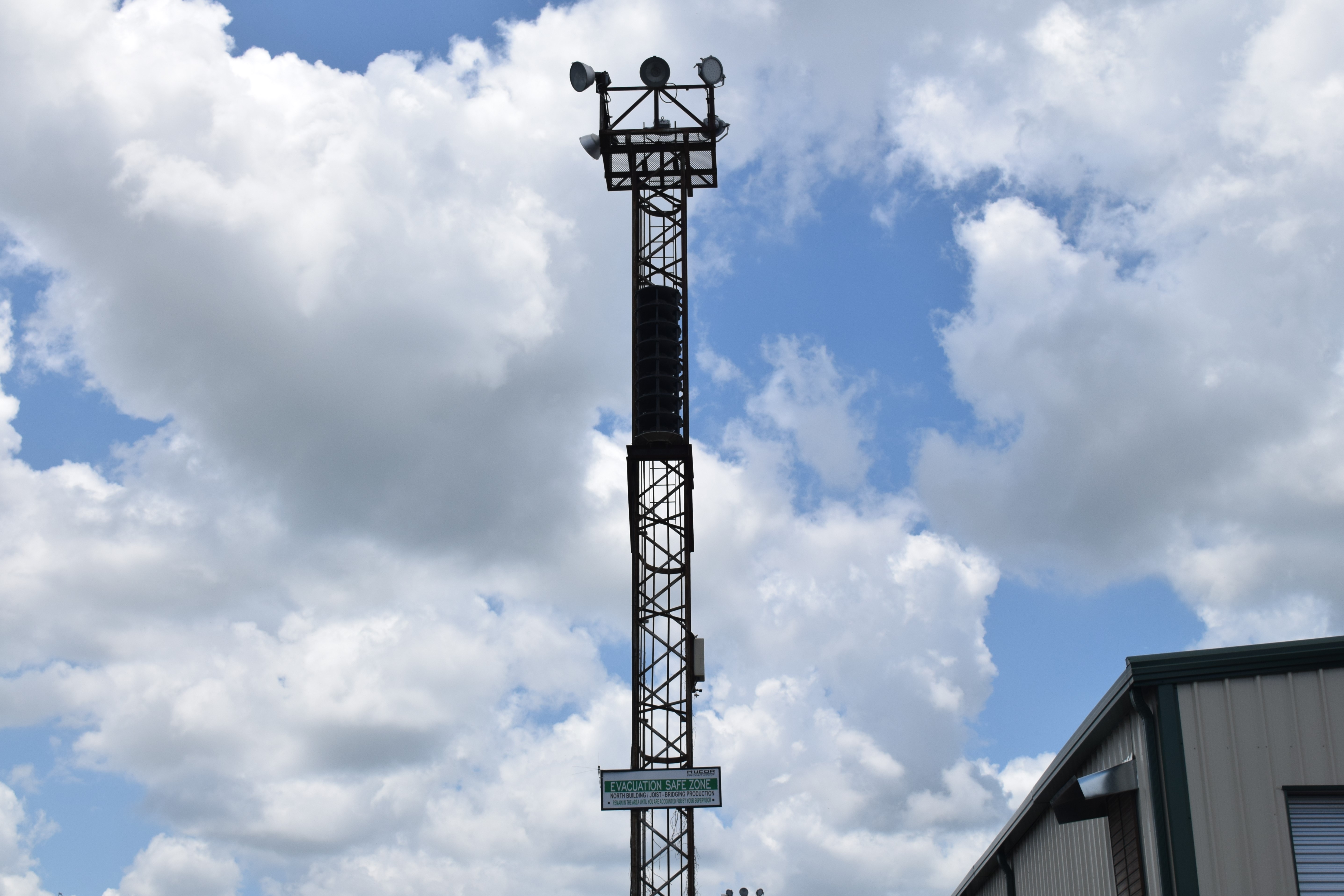 GRAPELAND – Back in the day, it seemed like every Saturday around noontime, the normal Grapeland quiet would be pierced by the wail of a loud siren. That siren, which sat on the roof of the old Methodist Church – now the Grapeland Public Library – has long been quiet.

A new warning system, however, recently made its debut in the Grapeland area. In a press release from Vulcraft received on Friday, July 13, it was announced a new state-of-the-art severe weather siren at the Grapeland steel facility had recently been installed.

“The siren is connected via the internet to the National Oceanic and Atmospheric weather station (NOAA), in Houston, for instant operation in case of severe weather in our area.  There is also a feature allowing for operation of the siren manually, should the need arise.  If a tornado warning is issued for our immediate area, the siren will activate to alert the public,” the media release stated.

According to Jeff Hall, Environmental Coordinator for Vulcraft, “Our old system was antiquated. You had to make a phone call on an analog line which could go down in a severe weather situation so we couldn’t set the siren off if we needed to.”

Hall said because of this, Vulcraft personnel “… started looking at what was available. We ran the gamut. We looked at a system which would flash on everyone’s computer screen. That worked for the people in the office, but it didn’t help our teammates out there on the line.”

A decision was made to go with a siren “… because it was audible everywhere. It also gave us enough lead time – once we hooked it up to NOAA – to get to shelter. Seriously, we used to have to go out to the back, southwest corner to watch the clouds come in,” Hall said.

The system was purchased from Whelen, a national leader in the production of mass notification systems.

“We have a six to seven mile radius, depending on ambient noise and wind conditions, where that siren will be audible. On our Monday tests, there will be an announcement over that siren that says ‘This is a test.’ We will then test it for the next 30 seconds to make sure everything links with NOAA and then we’ll shut it down,” Hall said.

The press release stated Vulcraft plans to test the system at noon on the first Monday of each month to insure operational readiness. The system will not be tested if there is already the potential for severe weather in the area to avoid any confusion.  The first test is set for Monday, Aug. 6.

“We are extremely proud to have this new system operational for the benefit of our teammates here at Vulcraft.  When we considered this system, we wanted to be sure that it benefitted both Vulcraft and our local community,” Production Manager Josh Wall stated.  “We continually strive to improve safety for our team and the communities where we live and work.”

Hopefully, it will never have to be used in more than test mode, the media statement concluded.