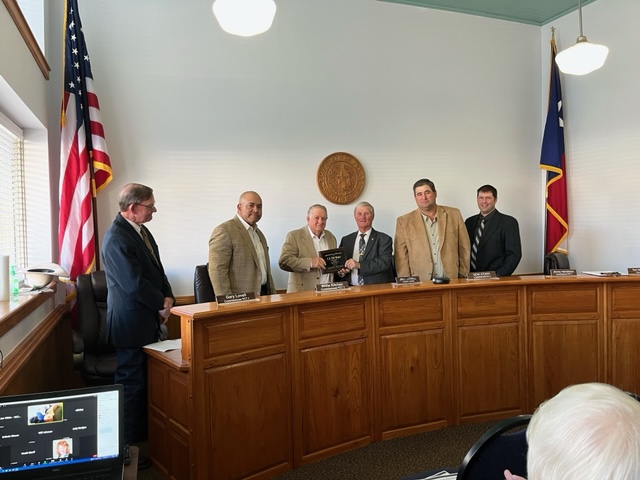 Hodges Recognized for 50 Years of Service

HOUSTON COUNTY – It is an understatement to say the COVID-19 pandemic has caused a myriad of issues throughout the country. One of these issues has been a labor shortage and on Tuesday morning, Jan. 11 it was revealed the lack of workers was starting to impact the Houston County Sheriff’s Office (HCSO).

In a Jan. 7 letter to County Judge Jim Lovell and the Houston County Commissioners Court, Sheriff Randy Hargrove addressed this and stated a jailer had contracted COVID-19 on Dec. 31.

“Since that time,” the sheriff wrote, “we have had 11 inmates and four jailers test positive for COVID. We have taken all necessary steps to stop the spread of this variant. The jailers have quarantined at home and the inmates have been quarantined in the appropriate cells until they have a negative test. We are three full-time and one part-time jailer short (positions not filled), plus the four jailers who have COVID. This makes us short seven full-time and a part-time jailer. Because of this shortage our jailers are working 18-hour days, plus some of their days off, so that we remain in compliance with jail standards. Of the three jailers that we are short, two of those positions have ben unfilled for some time now. This has also been a problem in the recent past when someone calls in sick another jailer has to work overtime or one has to be called in causing them to accrue comp-time. I recently received notice that two of our jailers will be resigning in February to attend the police academy. This news and the lack of potential applicants, is quickly becoming problematic with our jailer to inmate ratio. Our jailers are worn out and at this time the comp-time they are earning just isn’t appealing. With conditions as such, they can’t take time off without causing a co-worker to accrue comp-time. I am requesting that they be paid overtime each pay period it is earned. I believe this would help morale and cause them to be more willing to help take up the slack, so to speak, until we can find a solution to this problem.”

Given that backdrop, an agenda item on the Jan. 11 Commissioners Court agenda pertained to a request from Sheriff Hargrove to pay out current accumulated comp time over 40 hours.

After elaborating somewhat on his letter, the sheriff went on to explain without the jail remaining in compliance, there was a possibility of losing contracts with other counties for the housing of inmates.

“I’m afraid it is going to get to the point – if we continue to lose people – we will have to cancel our contracts with Trinity and Leon Counties. That would be about $41,000,” he said.

In response, Judge Lovell said “The question at hand is to pay out this comp time. Our policy is we can’t just pay out one department. We would have to pay out all the county (employees). Right now, I don’t know what that would cost us.”

Following several more minutes of discussion, it was decided to gather the exact monetary figures before any action was taken. A special meeting of the court has been scheduled for Friday, Jan. 14 to further discuss and possibly take action on the matter.

Prior to the labor shortage discussion, County Surveyor CR (Chili) Hodges was asked to join the commissioners at the front of the courtroom.

“We have with us today, our County Surveyor, Chili Hodges,” Judge Lovell said. “At our employee appreciation dinner, he was presented with a certificate. We also have a plaque. It is not very often we have someone who serves the county for 50 years. If you would come forward, we would like to present you with this plaque which reads this is presented to CR “Chili” Hodges for 50 years of loyal and dedicated service as the County Surveyor. It is with great honor that I present this to you.”