GRAPELAND – The long ball is always exciting. Anytime a player goes yard, it seems to pump up the fans and the team. The granddaddy of all dingers – the grand slam – now that’ll get the other team on its feet. The Denny’s restaurant chain even has an entire menu section dedicated to all things “grand slam.”

Having said all that, Grapeland Sandiette Cierra Simon made her first homerun in district play one to remember when she turned on a 1-0 pitch from Slocum’s Jalyn Fletcher and sent it screaming over the left-centerfield fence for a Grand Salami. 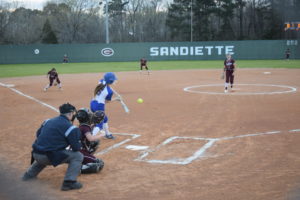 Up to that point, the rivalry game betwixt the Grapeland Sandiettes and Slocum Lady Mustangs was still fairly close.

The Lady Mustangs had jumped out to an early 1-0 when Jessi Ives singled in the top of the first and came around to score on an error.

The Sandiettes, however, had a two-out rally in the bottom half of the first to take a 2-1 lead. Fletcher, who was in the circle for the Lady Mustangs retired the first two batters she faced but then yielded back-to-back hits to Sandiettes Cadie Currie and Cheney Boyd.

Christy Shepherd came in as a courtesy runner for Currie and moved to third on a Slocum error. Boyd took second on the play and when Maddie McCombs lined a shot into left, both Shepherd and Boyd scampered home.

Currie was in the pitcher’s circle for the Sandiettes and mowed down the Lady Mustangs in order during the top of the second. 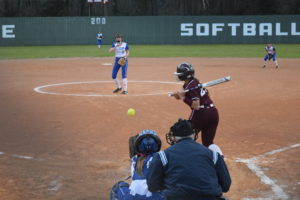 When Grapeland came to bat in the bottom of the frame, the Sandiettes tacked on three runs on consecutive hits, a fielder’s choice and an error to make the score 5-1 after two complete.

Fletcher led off the top of the third with a single past third baseman Kierra DeCluette. She made it to third on consecutive groundouts but was stranded there when Briley Evers struck out.

The bottom of the inning belonged to Simon. McCombs reached on an error to lead off the inning and moved to third on back-to-to back bunts from KeKe Harris and Diamond Dunn. Haley Reed bunted into a fielder’s choice that caught McCombs at the plate, but kept the bags juiced.

With the bases still loaded, the stage was set for Simon. After watching the first pitch of her at-bat go by for a ball, she dug in at the plate for Fletcher’s next pitch. As the ball neared the plate, Simon unleashed a vicious swing and connected with the pitch.

The ball flew into the darkening sky and while it appeared to be losing steam as it neared the wall, it had just enough to clear the fence and land in the ditch behind left-center field for a grand slam. 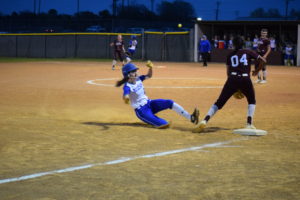 While the Lady Mustangs added another run to their total in the top of the sixth, Simon’s four-run blast seemed to take the wind out the Slocum sails as Grapeland cruised to the 10-2 district win.

Fletcher took the loss for Slocum as she went the distance and gave up 10 runs on 14 hits. She also walked one and struck out one.

It should be noted the Lady Mustangs had been playing basketball the previous week and were still getting re-acquainted with the softball diamond.

Currie picked up the win for the Sandiettes as she pitched seven innings and gave up two runs on four hits. She also struck out six and walked two.

Simon was the star at the plate with her grand slam and four RBI.