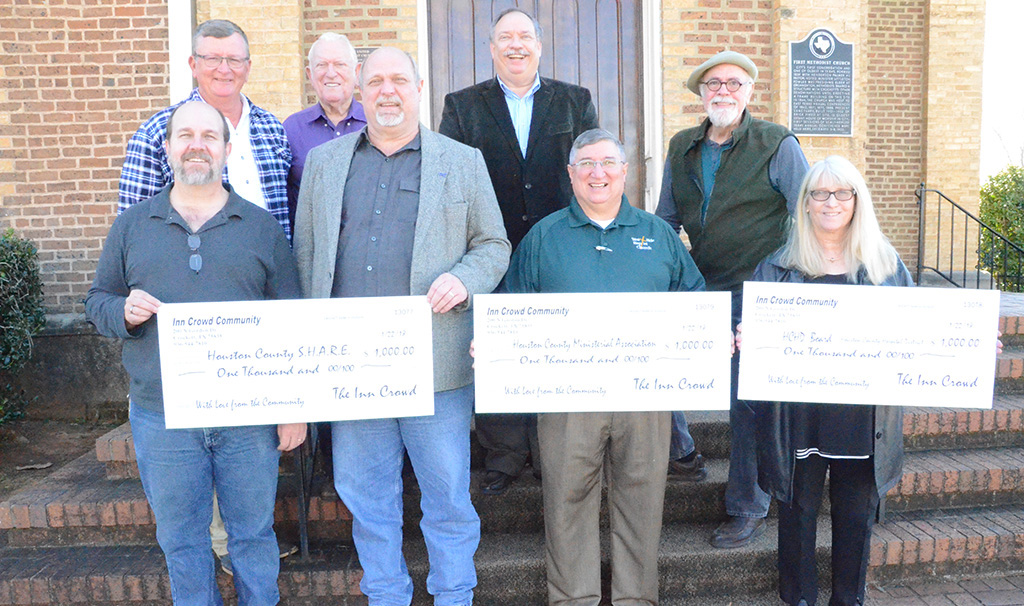 CROCKETT – The proceeds from tickets sold to two December presentations of “The Inn Crowd,” a musical outreach for which First Christian Church of Crockett and 24 other churches in Houston County joined forces, were recently donated to three non-profit organizations who currently serve the county.

“We made a profit of a little over $3,000,” said Brian Lake, former executive producer of the Piney Woods Fine Arts Association (PWFAA). “So, we decided we would share that.”

Co-author of “The Inn Crowd” Bob Woolsey explained that he and his wife, Susan – who are both music ministers – wrote the play around 20 years ago while residing in Alaska.

“It’s based around a kind of dinner theater, and it is the story of people going to Bethlehem to pay their taxes and all that jazz and also the birth of Christ,” explained Woolsey.”

The play is a musical featuring both original songs written by the Woolseys, as well as traditional favorites.

“We had seen several other renditions of that particular scenario – the birth of Jesus – and we just thought we would do it a little bit differently to maybe get people to come to something that was a little less traditional,” explained Woolsey when asked what inspired the creation of the musical. “But still, the story is there that Christ was born for all of our benefits.

“We just wanted to sort of modernize it,” he continued. “But it’s not out of context or anything.”

Woolsey expressed gratitude for the opportunity to help the three organizations to which money was donated.

“We were blessed to have some money left over, and we certainly wanted to bless those three entities,” he said.

For the Woolseys, Susan said, the driving force behind ‘The Inn Crowd’ is bringing people together.

“I think our whole purpose is to help unify the community and assist where we can,” she said. “Bob and I are musicians/music ministers/music teachers. In the beginning of our ministry together, we committed everything that we do musically – that’s what God gave us as a gift – to go back to Him. However we can reach others or help others, we do it through music.”

According to Woolsey, plans for next year’s presentation are already being discussed, including a change of venue.

“Last year and the year before last, we did it at the Methodist church in Crockett, and we only had one show,” he explained. “It was not nearly enough, even though it seats approximately 300.”

For the 2017 presentation, two separate performances were given.

“That seemed to help, but it still wasn’t quite efficient enough to seat everyone that we wanted to,” Woolsey said.

Those organizing the play also hope to entice more viewers by selecting a venue other than a church.

“You know, some people are just not interested in going to a church session, but they’re sort of bordering on thinking about creation and thinking about religion, let’s say,” Woolsey pointed out. “But they probably would go to another venue, and that’s what we’re trying to plan.”

The Woolseys said, according to Susan, that the first presentations of “The Inn Crowd” were given at the First Christian Church.

“We couldn’t reach enough people,” she said. “We had to go to three nights to be able to have guests come in, because our church was supporting it so well that we were full every night.”

“We held it at the Methodist gym, and (it was) fabulous, well-received, very well attended,” she said. “But the complaints that we got afterward were there wasn’t enough opportunity for someone on the street to come in. There just wasn’t enough room.”

The Woosleys said, according to Susan, that other venues such as the Crockett Civic Center are being considered for 2018.

While the production is very “labor-intensive,” said Susan, it is a delight to be a part of.

“It’s a fabulous group of people,” she said of those involved. “There’s so much joy.”