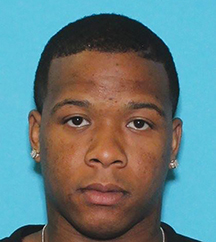 HOUSTON COUNTY – On Monday, Dec. 4, Demetrius Gerald Wheeler, 27, was sentenced to 45 years in the Texas department of Criminal Justice – Institutional Division for his role in robbing the Lovelady State Bank in December of 2015.

Wheeler had been found guilty during court proceedings held in June of this year. It took a jury of five men and seven women less than 10 minutes to render a guilty verdict in the case.

The trial was held in the 3rd District Court with District Judge Mark Calhoon presiding. Wheeler had retained Houston-based attorney Arthur Washington to assist in his defense while the prosecution was led by Houston County District Attorney Donna Kaspar.

During Wheeler’s trial, Allus Hubbard was called to the witness stand. Hubbard had been apprehended by law enforcement officials in Trinity shortly after the robbery and had previously admitted he was one of the three men who robbed the bank.

At the time of the verdict, Wheeler elected to have the judge assess punishment. Sentencing was originally set for Aug. 11 but because of various scheduling conflicts, Wheeler’s term of incarceration was not handed down until Monday, Dec. 4.

“After hearing all the evidence and reviewing a presentence investigation report on Mr. Wheeler,  Judge Mark Calhoon, assessed punishment at 45 years in the Texas Department of Criminal Justice, Institutional Division,” Kaspar stated after the sentencing.

“The judge noted that Mr. Wheeler did not enter the bank with a gun as the other defendants had done but he had a greater criminal history than the others involved and tried in this court for the offense.  The other defendant who has been tried in the case is Alonso Irving. He received a 45-year sentence from the jury on May 5. Allus Hubbard’s case is still pending and he is awaiting sentencing.  He is expected to take a plea bargain at his sentencing,” Kaspar added.

At the time of Wheeler’s conviction, the DA added the fourth person involved in the robbery, Ryan Scott, was being held in the Harris County Jail on charges of capital murder.

She explained because the charge of capital murder carries a punishment of life in prison without the possibility of parole or death by lethal injection, if Scott is found guilty on the capital murder charges, he would not be tried in Houston County. If he is found not guilty, however, Kaspar said Scott would be extradited to Houston County to stand trial for the bank robbery.