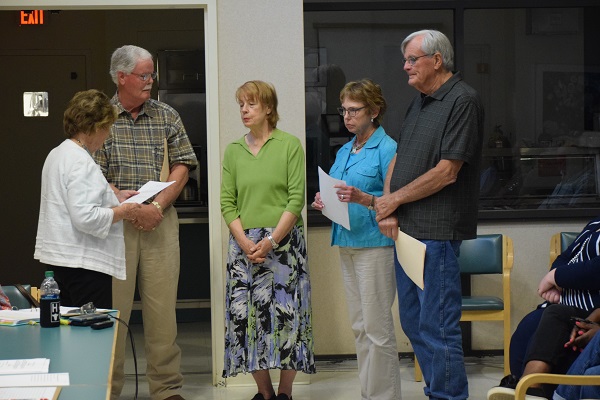 HOUSTON COUNTY – The Houston County Hospital District (HCHD) Board of Directors met on Tuesday, May 21 to swear in newly elected board members, elect officers and reorganize committees.

Outgoing HCHD President Bob Grier opened the meeting and after the minutes were approved, he read a prepared statement.

In part, his statement read: “I cannot begin to express my appreciation to my fellow members for their hard work and service. We have gone through a lot over my four years of service. We have accomplished much over this this time.

“We operated the hospital on our own for several months, preserving health care, preserving local jobs and retaining our hospital license. 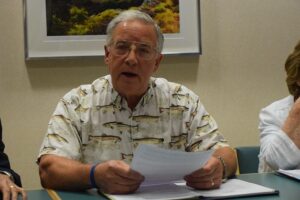 “Little River/Timberland came along and offered a reprieve from the financial and operational load the HCHD was experiencing. The board performed due diligence, but were taken in by unscrupulous people. Bankruptcy is their fate. Investigations are ongoing.

Grier thanked State Rep. Trent Ashby for helping the hospital retain its license following the Timberland departure. He also expressed his appreciation to US Rep. Kevin Brady for keeping an open line of communication with the Centers for Medicare and Medicaid Services.

He further expressed his gratitude to Doctors Subir Chhikara and Kelly Tjelmeland for reopening the hospital and to ETX Successor for the forgiveness of a $4 million note owed by the HCHD.

As he continued to read his statement, Grier’s statement turned to an unpleasant matter. He stated a newly elected board member was alleged to “… to have committed criminal trespass here at Crockett Medical Center (CMC). He then is alleged to have carried out a most serious violation of the Centers for Medicare and Medicaid HHIPPA violations. CMC has standard operating procedures covering patient privacy. It is not clear how he will be able to serve under these conditions. Also implicated in these alleged acts is a currently serving member of this board. She appears to be complicit in these actions.”

Following his statement, Grier turned the meeting over to Board VP, Dr. John Stovall who requested HCHD administrator Dick Murchison to provide the April financial report.

Once the financial report concluded, newly elected directors Harvey Bruner and Erin Ford, along with reelected board members Barbara Crowson, Carol Dawson and Pat Dickey were sworn in.

After the swearing-in had concluded, Carol Dawson provided a report from the Nominating Committee. The committee recommended Barbara Crowson for president, Dr. John Stovall for vice president and Pat Dickey for secretary.

While there were no further nominations for the role of president or vice president, newly sworn-in board member Erin Ford nominated fellow board member Dina Pipes for the secretary’s position.

A vote was held for secretary and the results showed Dickey receiving five votes while Pipes received four.

As a result, the officers of the HCHD Board are: Barbara Crowson – President; Dr. John Stovall – Vice President; and Pat Dickey – Secretary.

Stovall yielded the floor to the newly elected president and Crowson’s first order of business was to express her appreciation to Larry Robbins who was not present at the meeting. 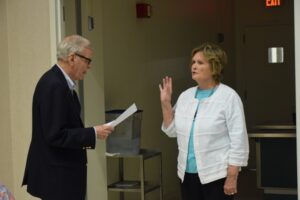 She also thanked Grier for his service to the board for his wonderful service.

Stovall also took the opportunity to speak in appreciation of Grier.

“As many of you know, I can speak from experience about the presidency of this board. I had a walk in the park compared to Bob. That was the toughest job in Crockett, Texas over the last three years and you did a more than admirable job. You did an outstanding job and I appreciate what you did. The whole district and community should also appreciate what you did because – not single-handedly – but with a lot of help from us – still you were the leader – and you made sure this hospital did not go down. And for that, I think we should all thank you very much,” Stovall said.

As the meeting continued, Hospital Administrator Tommy Johnson who indicated Aetna would begin accepting insurance claims from CMC beginning on June 1 while the clinic would follow shortly behind.

After Dina Pipes provided the ambulance report, Crowson informed the board members the committees were going to be re-organized.

Once Crowson provided the board members with their committee assignments, the next order of business was to take action on an amended interlocal agreement with LifeGuard Ambulance to drop the monthly fee from $20,000 per month to $10,000 per month for the next five months. A motion was made, seconded and unanimously approved.

Before the meeting concluded, Ford addressed the allegations levied by Grier in his statement.

Ford explained it was him who Grier referenced.

“Last week, I heard documents were being shredded at the hospital. I went down the hall and looked in a room and sure enough there was a huge pile of shredded documents in the room,” he said.

Ford referenced Local Government Code 201 in regard to the retention of documents and said it was his intent to research the matter in order to make sure this was the correct procedure.

Carol Dawson replied, “We are not in the business of managing hospital records. Record management is what CMC is doing. It is a very standard procedure. When I worked here, we had policies that board members were not to enter into employee only areas and not to view private medical records. It is not our duty to get involved in the day-to-day operations of the hospital. These people are leasing from us.”

“If you are leasing a house,” Dawson continued, “the landlord doesn’t get to just walk in and go through your closets. I think it was poor judgment on your part. As you see, it wasn’t legal but nonetheless you were not on the board at that time and you didn’t know. If you haven’t worked in a hospital setting, you don’t know. These are things you learn and we are going to do some training. I hope the board members will learn how to be good stewards of our positions.”

Several more minutes of discussion were held on the matter but nothing was resolved.

Fireballs Honored with Proclamation, Resolution
Denson Investigated for Capital Murder
Excuse Me, But I Think You’ve Got My Chair 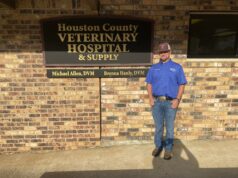