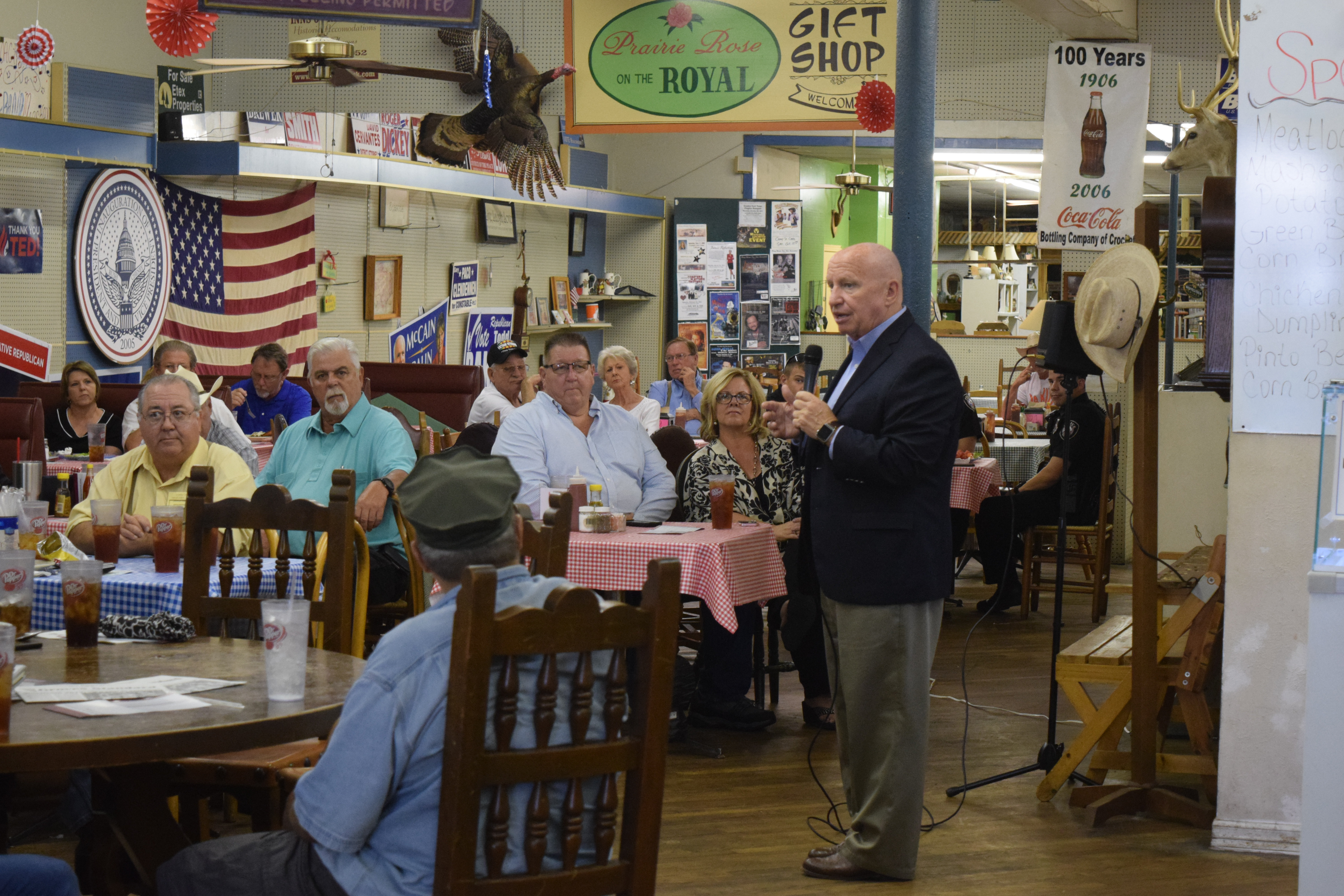 CROCKETT – With the U.S. Congress on their annual summer break, U.S. Rep. Kevin Brady (R – The Woodlands) stopped by the Moosehead Café in Crockett on Wednesday, Aug. 9 for a town hall meeting with local constituents.

Brady represents the 8th Congressional District of Texas which includes all of Montgomery, Walker, Houston, San Jacinto, Trinity, Grimes, Madison, and parts of Leon and Harris counties. He also serves as the Chairman of the Ways and Means Committee in the U.S. House of Representatives.

“I watched the Affordable Care Act and saw the (insurance premiums going up. Texas has lost nine insurers and we can’t see our local doctors. It is spiraling downwards and we need to do something to make sure people have affordable healthcare,”

“I was disappointed the Senate didn’t come up with something,” Brady continued, “to help people afford healthcare. My solution was to begin transitioning the decisions out of Washington and move them back to patients in the state so we can design healthcare that works for Texas, not Washington.”

Following the healthcare matter, Brady touted some of the bills recently passed by the U.S. House of Representatives.

“One of them starts to change the V.A. (Veterans Administration). We have some really good people at the V.A., but there are some bad apples. Because of their negligence, we looked at cases in Phoenix and we identified 40 veterans who died, waiting to get healthcare from the V.A. We thought that was it, but it turned out there were hundreds,” Brady said.

Veterans were deserving of the best healthcare available, Brady explained, due to their willingness to sacrifice for their country. 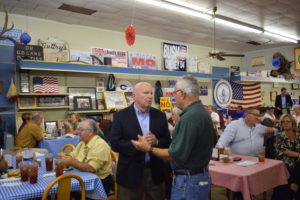 He explained two bills were sitting on the president’s desk pertaining to the V.A. The first bill would strengthen a measure enacted during the Obama administration to allow veterans more flexibility in healthcare providers based on geographic factors.

The second bill would allow for the immediate termination of V.A. employees who are “… not dedicated to taking care of our veterans.”

Another area mentioned by Brady concerned attempts to cut through the red tape and regulations faced by small businesses in an attempt to spur the economy.

Defense spending was also addressed during the congressman’s opening remarks.

“House Republicans have passed a bill that restores defense spending by 10 percent. It restores the readiness, training and weaponry to keep us safe in a very unsafe world. In that bill, it gives the military the largest pay raise in a decade,” Brady said.

The topic of Immigration was also addressed by Brady who said the defense bill contained an allocation of funds “… to begin to get serious again about securing our border. You may have heard me say this before but I believe you have to shut the back door of illegal immigration so you can keep open the front door of legal immigration.”

Before opening the floor for questions, Brady explained in his role as the House Ways and Means Committee Chairman, “… we are in charge of everything dealing with taxes, much of what happens in healthcare, trade, welfare, social security and Medicare.”

“I wrote half of the healthcare bill that passed the House and I lead the tax reform effort,” Brady said as he transitioned into a discussion about the Republican tax plan.

“What we are proposing is a tax code that is so fair and simple, nine out of 10 Americans will be able to file (taxes) using a simple post card system,” he said.

“Secondly, I am proposing a tax code on our local businesses – the lowest rates in modern history – so our American companies can compete and win anywhere in the world and especially at home. The third thing we are proposing to do is we bust up the IRS and redesign it into a 21st century agency focused on taxpayers and taxpayer service. If we succeed, independent groups estimate this will grow the American economy by nine percent and paychecks by eight percent,” the congressman said.

Following the tax code discussion, Brady opened the floor for questions from those in attendance.