AUSTIN – After the Slocum Lady Mustangs defeated the Nueces Canyon Lady Panthers on Friday, Feb. 24 – by a score of 55-51- they knew they stood on the precipice of a trip  to San Antonio and a shot at the Class 1A State Championship in girls’ basketball. 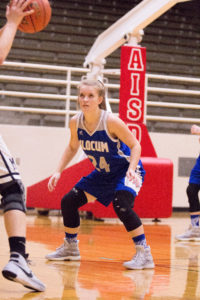 All that stood in their way on the road to San Antonio was the Moulton Lady Bobkatz who they faced on Saturday, Feb. 25 for the Regional Championship. It was simple – win or go home. There wasn’t much discussion on the matter – Coach Dustin Bates’ team didn’t travel to Austin to see the sights. They came to win!

And they did just that as they defeated the Moulton Lady Bearkatz by a final score of 65-44 to punch their ticket to the State Semif
inals in the Alamo City.

The game started out with the two teams circling each other like a pair of prizefighters looking for a weakness to exploit. Briley Evers found that weakness in Moulton and knocked down two first quarter 3-pointers for six points. She was joined in the scoring column by Jessi Ives who also had six on a pair of twos and two free throws  Jaidan Wickersham got in on the act as well as she netted a two to make the score 14-10 after one period of play.

The Lady Bearkatz’ points came from Bailey Bohuslav and Mandi Mitchon with four apiece while Julie Fojtik chipped in two.

The second quarter saw the Lady Mustangs continue to fire away from behind the arc as they knocked down four more 3-pointers to help open up a 14 point lead by the half. Ives hit a pair of threes as part of her eight points in the period. Taylor Clark dropped in four on a two and a pair of free throws. Evers hit her third three-ball of the half while J 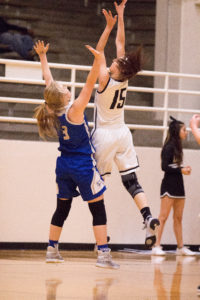 alyn Fletcher also drained a three of her own and Cheyenne Nunley knocked down a pair from the charity to make the score 34-20 at the break.

Moulton stayed consistent in the second as they added another 10 to their first quarter total on four from Bohuslav and two each from Erin Blaschke, Mitchon and Lillie Jahn.

As the third quarter opened, the Lady Mustangs looked a little tentative both on offense and defense. Still they maintained their composure long enough to put up 10 points and keep the Lady Bearkatz at bay.

Ives hit her third 3-pointer of the game and added a two for good measure. Fletcher knocked down her second three-pointer of the afternoon and Shelby Bowman dropped in a two.

Meanwhile, the Lady Bearkatz began to chip away at the 14 point deficit they were facing. Fojtik dropped in five while Blaschke added three.  Mitchon and Rayvin Kalisek both scored two while Laura Manzano made one of two from the line to cut the lead to 44-33 with eight minutes remaining.

Eight minutes between moving on – or going home. That was all that was left. Coach Bates more than likely told his team it was their time to shine or something to that affect and shine they did. 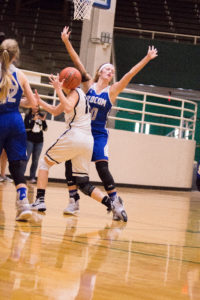 e Lady Bearkatz to just 10 on nine points from Kalisek and one from MItchon.

Taylor Clark led the charge to put the game away with five fourth quarter points. Shelby Bowman had four, Makayla Bickerstaff and Courtney January both had three while Evers and Fletcher had two apiece. Ives and Nunley both chipped in one to close out the fourth quarter scoring and help lead the Slocum Lady Mustangs to the Region IV Championship by a score of 65-44.

For the game the Lady Bearkatz were led by Rayvin Kalisek with 12 points and Mandi Mitchon with nine. Bailey Bohuslav went for eight, Julie Fojtik had seven, Erin Blaschke had five, Lillie Jahn added two and Laura Manzano chipped in one to round out the Moulton point production.

The Lady Mustangs were led by Jordan Ives with 20 points and Briley Evers with 11. Taylor Clark had nine and Jalyn Fletcher went for eight. Shelby Bowman dropped in six while Makayla Bickerstaff, Courtney January and Cheyenne Nunley all had three. Jaidan Wickersham rounded out the Slocum scoring with two.

The Lady Mustangs will face the Nazareth Lady Swifts (33-1) Thursday, March 2 at 8:30 a.m. in the State Semifinals.