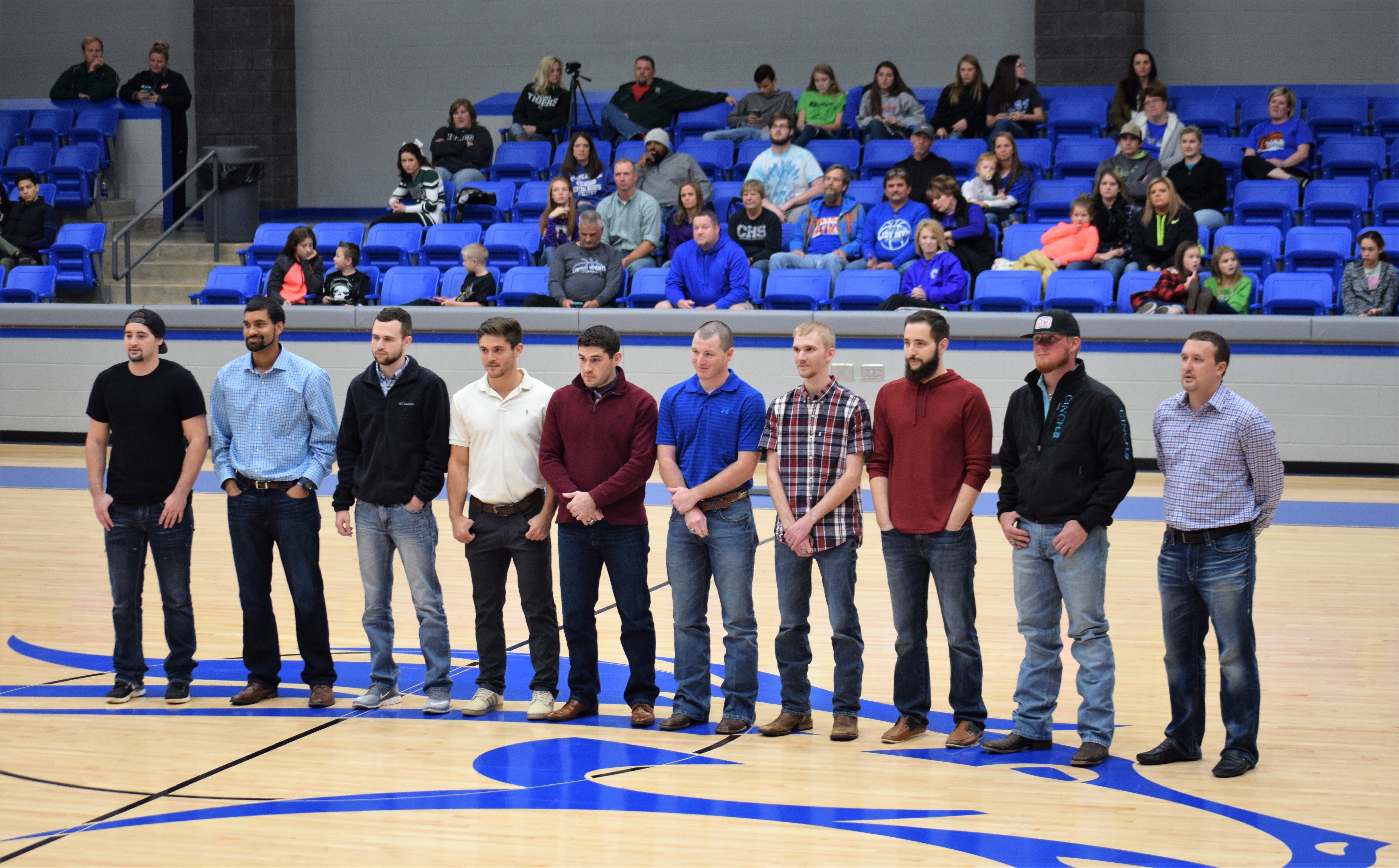 SLOCUM – Basketball fans in Slocum were treated to some great basketball over the weekend as the Mustangs and Lady Mustangs showcased their new school and gymnasium during the Slocum High School Basketball Tournament.

The fans in attendance for the Girls’ Championship game between the Woden Lady Eagles and Central Heights Lady Blue Devils received a bonus as the 2009 Class 1A Division II State Champion Slocum Mustangs basketball team was honored during a halftime ceremony.

As the celebration of the state championship got underway, Slocum ISD Superintendent Cliff Lasiter introduced the team members as they emerged from the dressing rooms looking a little more seasoned than they did as freshman, sophomores, juniors and seniors. He then turned the microphone over to Coach Bruce who said, “I hope this is something the athletes here in Slocum can strive for every day. Let’s get some more of these trophies in that trophy case over there. This team was special. They are already winners and have been successful in life.”

He chuckled and said, “It’s definitely appropriate that Cole was late tonight and Logan didn’t make the trip. Some things never change! What a great group of guys. Someone asked me earlier do I miss coaching – being around these guys – absolutely. It is an honor to be associated with a group of winners like these guys who were willing to work hard and do what it took to win a state championship. Now, they did have a question. They wanted to know if there was any way they could play tonight. Thanks for letting us be here and. It’s an honor.”

After the halftime ceremonies concluded, former players Jared Lane and Randall Thomason spoke about being honored and the memories it brought back. “It’s a pretty big deal. We worked really, really hard to get to where we got. Not a lot of teams are able to say that,” Thomasson said.

“There were a lot of summer league games, a lot of fall league games and it seems to have paid off. It was nice to be recognized after all these years,” Lane said.

When asked if they ever replayed any of the games in their minds, both said yes and Lane added, “It is fun to go back and relive the moment a little bit. It’s a good feeling.”

Asked for a specific memory, Lane looked at his teammate and said, “It has to be him (Thomason) hitting those free throws to get us to state.”

Thomason countered and expressed, “It was probably this guy (Lane) hitting shot after shot. You don’t realize what you miss until the next year when he’s not there and you have to do it without him.”

Lane was also questioned about how he felt to end his senior year in basketball as a state champion. It was great! There were only two seniors on the team and we also talked about it. We couldn’t have scripted it any better. Jumping around with your teammates and going crazy, that was the best way to go out.”

The two Mustang State Champions were further asked what they were doing seven years removed from raising the trophy on the floor of the Frank Erwin Center in Austin. Thomason said he was coaching basketball at La Poyner while Lane said he was attending chiropractic school in Dallas.

Coach Jay Bruce also discussed the new Slocum facilities what the ceremony meant to him.  “It’s unbelievable. The Slocum school district really knocked it out of the park. The one we played in wasn’t quite like this. This very cool. It was very nice that they let us come back tonight and it just shows they appreciate what these guys did in 2009. These guys are great. It was a great team,” he said.

The former Mustangs’ coach was also asked if he ever replayed the Slocum run in his mind. “Oh yeah. When we started the playoffs, every game was tough. Even the first round was tight. It was a battle all the way through. It’s definitely a memory I think about all the time. It’s definitely a highlight of my life, so far, and I think it is for all of these guys as well.”

In regard to specific memories from the playoff run, Bruce paused for a moment to reflect. “I think when we got to Austin, we were actually running late. We got into Austin traffic and we were on time, but that slowed us down. We got to the gym late, so we were kind of rushed. We didn’t get to warm up as much as we wanted to. When the game started, on the first possession, Jared Lane nailed a three pointer. I was like, ‘Okay. We’re going to be fine.’ That was definitely a highlight,” he recalled.

“Also, in the Regional Championship game when we played against Laneville in Nacogdoches. Laneville won our district – we didn’t even win our own district. We played them again in the Regional Finals to see who went to Austin and we beat them in overtime. Randall Thomason had to make two free throws to tie it, with basically no time left. That was pretty big!” he said, as a smile spread across his face.

These days, Bruce runs his own business and while he said he misses coaching sometimes, he laughed and said, “I decided I needed to try and figure out how to make some money!”