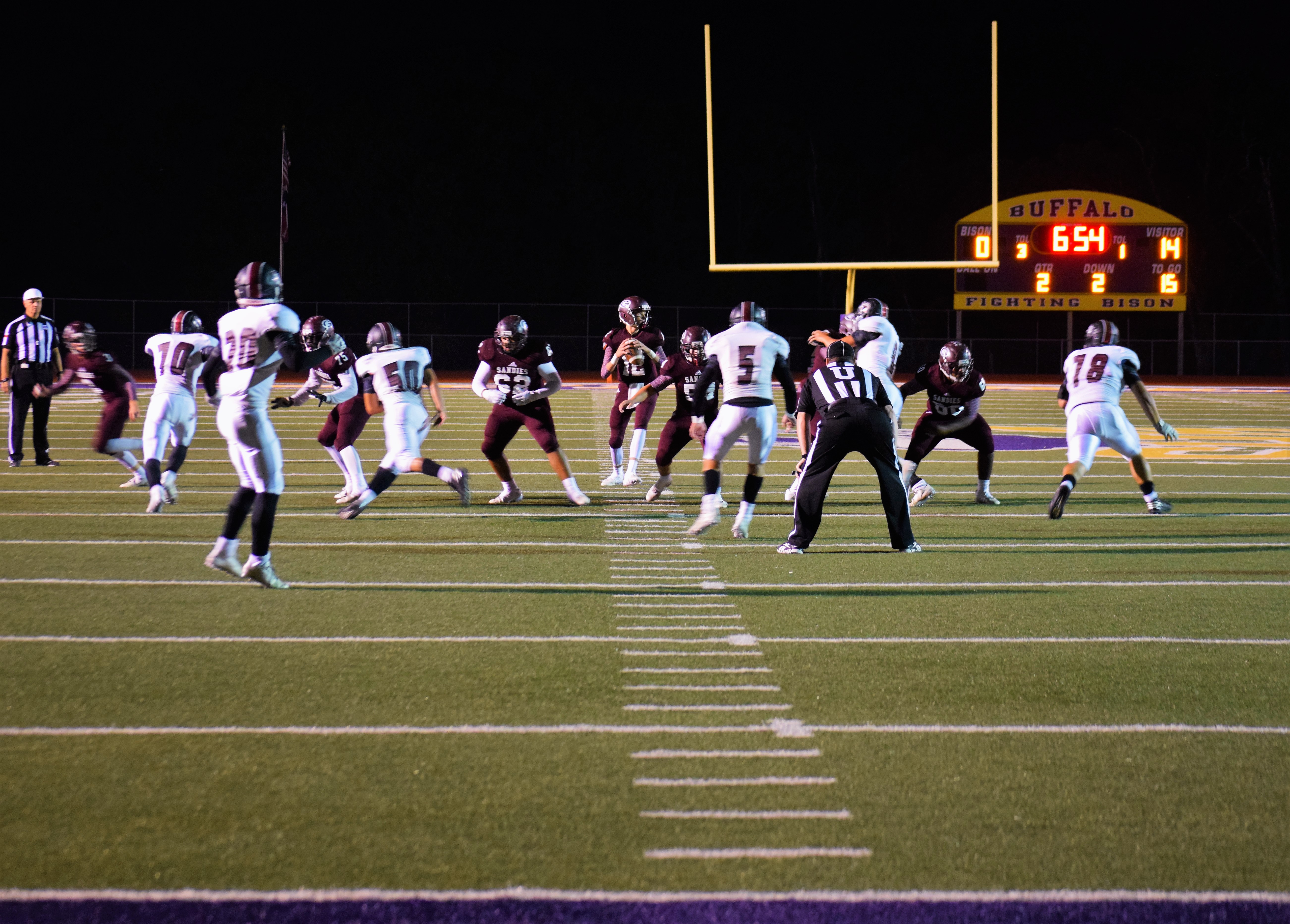 BUFFALO – The word snakebit not only means bitten by a snake, it can also mean unlucky or doomed to misfortune. Such was the case for the Grapeland Sandies on Thursday night, Oct. 10 as they took on the Iola Bulldogs in the Bi-District round of the 2016 UIL football playoffs.

It was a game Grapeland could have and probably should have won but it simply wasn’t in the cards for the star-crossed Sandies as they fell to the Bulldogs by a final score of 23-6 and it all started on the game’s opening kickoff.

After winning the coin toss, the Sandies elected to receive. The Bulldogs kicker, J.D. Funderburk, teed up the pigskin and promptly kicked it out of bounds. With electrifying kick returners Riley Chipman and Rodney Davis back deep to receive, Grapeland decided to back Iola up five yards and have them re-kick. Funderburk’s second kick bounced right into the waiting hands of a Sandie player near the 45 yard line. Unable to field the ball cleanly, the ball squirted loose and rolled to where a second Grapeland player was waiting to pounce on it.

The shape of a football causes it to do funny things when it comes in contact with another object and that axiom remained true as the ball slithered out of the grasp of several players and into the possession of the Iola Bulldogs at the Sandies’ 40 yard line.

On the Bulldogs first play from scrimmage, Iola QB Cameron Darby mishandled the snap and fumbled the b 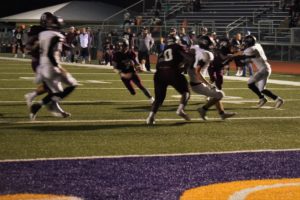 all. Stop for a moment and take this in. Darby’s fumble was the first of SIX (6) fumbles for Iola during the game. If a gambler were to go to Las Vegas and wager a team would fumble the ball six times and recover five – let alone win the game – he or she would have a very handsome pay day.

Iola lost a yard on the fumble, but on their second offensive play of the game, Bulldog Tyler Dykes took a handoff from Darby, turned the corner in front of the Grapeland sideline and raced 41 yards to the end zone. Funderburk’s extra point attempt was good and with less than a minute gone in the game, Iola led 7-0.

Following the Iola TD, the Sandies took over at their own 46 after a good kickoff return from Davis. The Grapeland offense, however, was unable to generate any positive yardage and after three straight incompletions, Grapeland was forced to punt.

After a Bulldog penalty for a chop block, the Sandies had Iola in a third and 14 situation but Darby found Dykes for 17 yards and a first down. The Iola QB put the ball on the turf for a second time in the quarter, but recovered his own fumble for a loss of 2.  Grapeland had Iola in a fourth and two from the 25, but allowed RB Colton Renick to pick up five yards and a first down.

On a third and seven from the 17, an Iola receiver was flagged for offensive pass interference. The Sandies took the penalty and pushed the Bulldogs back 15 yards to the 32. The next play saw Josh “Bear” Ackley make a great open field tackle at the 26 yard line to force the Bulldogs into a fourth and long situation. Unfortunately for Grapeland, Darby completed a fourth down to pass Kurtis Braddich who managed to get down to the three. Two running plays netted a yard for Iola and brought the first quarter to an end.

After the teams changed ends of the field and on the very first play of the second quarter, Chris Holmes took a handoff from Darby and plowed into the end zone from the two. The PAT was good and with 11:56 left in the second quarter, Iola led by a score of 14-0. 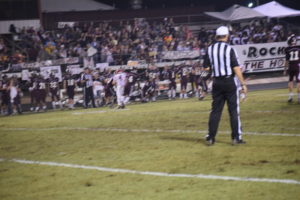 he Sandies started to show a little offensive life on their next possession. Grapeland QB Rick Frauenberger connected with Chipman for eight yards, while running back Brayden Cheatham picked up three more and a first down. Frauenberger then completed back-to back passes to Chipman. Cheatham caught a ball for three, Ackley caught a screen pass for 14 and Davis gained six on a pass across the middle.

Frauenberger picked up five on the ground but was sacked on the next play and lost six. On a third and 14 from the Bulldogs’ 35, an Iola defender was flagged for pass interference and the automatic first down kept the Grapeland drive alive.

The penalty gave the Sandies a first down at Iola’s 20, but an illegal procedure penalty pushed Grapeland back five yards. Two straight incompletions and a three yard pass play put the Sandies in a fourth and 12 situation. Iola helped out the Sandie cause and jumped offsides to give the Sandies five yards and make the fourth down play somewhat more manageable. On fourth and six, however, Frauenberger was sacked and the Sandies turned the ball over on downs at the 25.

Grapeland’s defense stiffened on Iola’s next series of downs and forced a three and out after Darby fumbled for the third time of the half. Like the previous two times, however, he was able to recover his own fumble and allowed the Bulldogs an opportunity to punt.

Following the change of possession, the Sandies started at their own 30. After Iola jumped offsides, the Sandies had a first and five at their own 35. Chipman was thrown for a six yard loss and on second down Frauenberger was sacked for a loss of five. Faced with a third and long, Frauenberger and Davis connected on a 38 yard reception to move inside the Iola 30.

With time running down in the first half, Frauenberger picked up 10 yards on a third and 12 while Chipman picked up seven on fourth and two. Chipman’s run gave Grapeland a first and goal at the eight yard line with eight seconds remaining in the half. Unfortunately, the Sandies could not punch the ball across the goal and the half expired with Iola leading by a score of 14-0.

After the break, Grapeland attempted an onside kick to start the second half. Iola recovered at the 50 and on their first play of the second half, Darby connected with Coy Creamer for 32 yards. Chipman and Davis ran down Creamer at the 20 and stripped him of the ball. Chipman scooped up the rock and started up field. A block in the back call brought the ball back to 10, but on second down and five, Chipman broke free on an 85 yard run for an apparent TD. The Sandies, however, were called for holding and the touchdown was nullified. 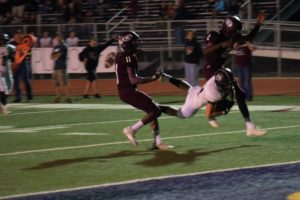 The touchdown reversal appeared to take the wind out of the Grapeland sails and the Sandies were forced to punt.

Grapeland held the Bulldogs after the kick and forced the Bulldogs into a punting situation. What followed on the next several plays was almost surreal. On the punt, the ball slipped through the Iola punter’s hands. He was able to retrieve it and threw up a prayer. Tink McQuirter was back on defense and tipped the ball back towards the line of scrimmage. An Iola player was trailing the play, managed to catch the tip and moved inside the Grapeland red zone for a first down. Unbelievably, Iola was called for a penalty on the strange play and punted once again.

This time, the punt pinned the Sandies at the one yard line. Two incompletions and a two yard pick up forced Grapeland to punt from their own end zone. With Frauenberger standing at the back of the end zone to punt, the snap sailed over his head and Iola was awarded a two point safety which pushed their lead to 16-0 with 5:23 remaining in the third.

Following the free kick, Iola took over at their own 34. On first down, Darby put the ball on the turf for the fourth time, but also recovered it for the fourth time. The very next play, Creamer took a handoff, found the edge of the Grapeland defense and turned on the jets as he raced 67 yards for a touchdown. The extra point was good and with 4:23 remaining in the quarter, Iola now led by a score of 23-0.

The remainder of the third and majority of the fourth quarter saw the two teams exchange punts. Darby fumbled once again but also managed to recover his fifth fumble. The Sandies were finally able to break into the scoring column with 22 seconds remaining in the game. Chipman caught a pass from Frauenberger, worked his way through the Iola “D” and crossed the goal line to make the final score 23-6, in favor of Iola.

The loss brought the 2016 Grapeland Sandies’ football season to an end with an overall record of 5-6.