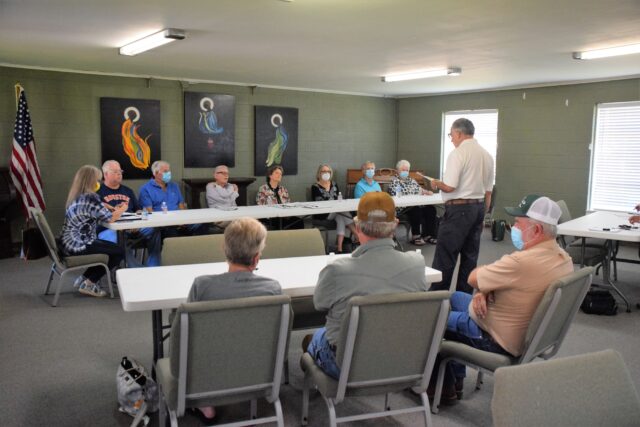 HOUSTON COUNTY – The Houston County Hospital District Board of Directors met in a called meeting on Tuesday evening, Aug. 31 to take action on setting the tax rate for Fiscal Year 2021-2022 and to adopt the coming year’s budget.

The meeting was called to order by HCHD Board President Barbara Crowson who said, “At the last meeting, we discussed the tax rates (either $0.13 or $0.14052 per $100 of property valuation) we would consider adopting. We had some public comments at that meeting and at this time, the board is open to comments from anyone who is here from the public who would like to give the board your concerns or views.”

The first person to speak was former HCHD President Dr. Bob Grier who spoke in favor of the effective tax rate of $0.14052. He explained his position saying the money generated by using this rate could go towards helping with several costs the district is currently faced with.

Next, former US Congressman Jim Turner addressed the board. He also expressed his desire for the board to go with the effective rate of $0.14052.

“I just came because I wanted to express my support for maintaining our tax rate at the level, I believe it needs to be maintained. I know I pay a lot of taxes and I know a lot of people here pay a lot of taxes. I think it is even more important to preserve this hospital, pay off your debts and get in a position where you can handle a crisis, whether it’s a roof expense or when we had no one operating the hospital,” Turner said.

The former congressman went on to say his belief was the board should build up a reserve and to be ready for the unexpected.

“We are still young in the experience of having CMC (Crockett Medical Center) lease this hospital. I know all of you are committed to being sure that we save it. Frankly, we all know that if we don’t have a hospital, we probably won’t have a town. Nobody is going to move here. Nobody is going to retire here because we don’t have a hospital or one within close proximity. You hold the keys to that. I would urge you to be conservative about your tax decisions, but look carefully at what we need to do for the longer term,” he said.

The next person to speak was Mike Brown who said he would like to see the HCHD lower their tax rate and perhaps explore other options for hospital providers.

Houston County Tax Assessor Laronica Wooten Smith was also in attendance at the meeting and had been invited to address any concerns the board might have.

Smith said the information provided to her indicated a proposed tax rate of $0.13 per $100 of property value had been provided by the HCHD.

“There is a form that is required to be published in the paper,” Smith explained. “You have a notice of the meeting to vote on the rate, which was published in the paper. You also have a notice for a hearing on a tax increase, which I did not publish because you are not doing a tax increase. It’s part of the truth in taxation process to let the taxpayers know. When you published the notice of the meeting to vote on the tax rate of 13 cents, you can go below the 13 cents but you can’t go above it.”

Crowson asked if the HCHD Board could go above the 13 cents, but Smith said she had checked on that but believed it was not possible to do so, unless the whole tax rate process was started over

As the discussion continued, Board member Debbie Kelly commented, “At the last meeting, I didn’t realize we were casting a vote. I thought we were just polling the board for an opinion. That was the way it was presented. Then it came out in the paper (another Houston County newspaper) that we had voted on 13 cents. In my mind, we did not do that. We talked about how we felt, but it was not a vote.”

The polling at the Aug. 24 meeting showed the 13 cents rate passed by a margin of 4-3. As president of the board, Crowson did not vote and Board VP Dr. John Stovall was not present at the meeting.

Following several minutes of sometimes heated debate, the board unanimously approved the $0.13 tax rate per $100 of property valuation. The 2021-2022 budget was also unanimously adopted.