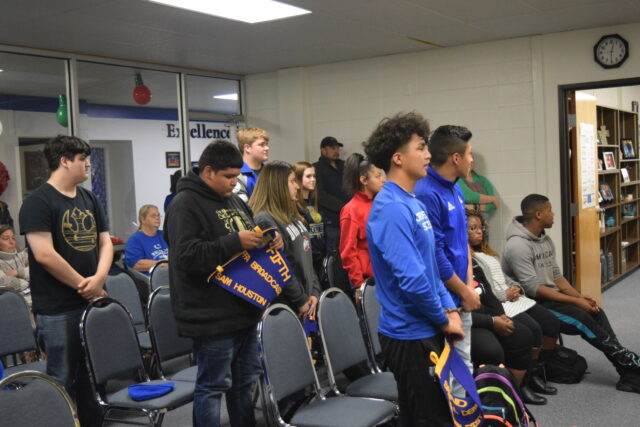 CROCKETT – During a meeting of the Crockett Independent School District Board of Trustees meeting held on Monday, Dec. 16, several students were recognized for their performance both in and out of the classroom.

Smith said the students won several banners at district competition and advanced to area competition. He added FFA teams from Crockett had competed at the National FFA Sr. Quiz competition where they placed 12th and 16th out of 80 plus teams.

“It’s not quite as high as we have been, but we’ll take it. We are going to revamp who gets to go and do that. We have been just taking our officers but we’re going to open it up and have a trial contest. We will take the best eight, because we’re going to win it,” he said.

Next to speak was Liza Clark with the Crockett Area Chamber of Commerce.

“We put on Christmas in Crockett. Every year, it’s a big event. This year, we had 142 new vendors. It just exploded on us. We put out a call for volunteers to help us because we didn’t have enough volunteers or board members,” she said.

Clark said she mentioned this to her husband (CHS teacher William Clark) and he said he could help her out.

“He put the word out to his class – 10th graders – and we got volunteers. The thing is I had just been in a meeting with other city leaders who told me we have a problem with our youth. They don’t want to volunteer or go out into the community,” she said.

“They were there at 5:15 am,” Clark continued, “and they worked all day long. There were 20 kids there before me and I got there at 5:20 am. I cannot be more proud of these kids and I want all of you to know how proud I am of these kids. Christmas in Crockett could not have gone off without these guys.”

Once Clark concluded, the CISD Superintendent spoke to those in attendance concerning the students in the district.

“I get so tired of people telling me, ‘That’s Crockett. Something is wrong in Crockett. Something is wrong with those kids.’ I am sick of that. I have said 1,000 this is best place I have ever been superintendent. You stand up and make me proud. I stick my chest out and tell people all the time, this is the friendliest place I’ve ever been. This is the best bunch of kids I’ve ever been around. This is a great place to live and work. It’s a great place to raise your kids. These kids are deserving of a great education and they are getting one here in Crockett,” Myers said.

Miracle for Matthew: Fundraiser set for Crockett Infant with Rare Heart Defect
2016 Veterans Day Ceremonies to be held in Grapeland
Juneteenth Celebration Put on Hold Due to COVID-19