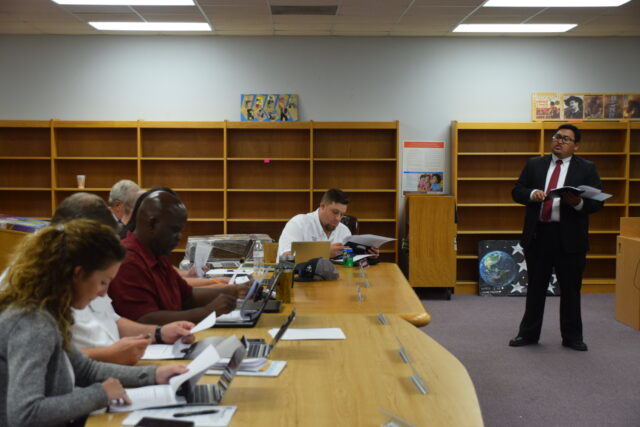 GRAPELAND – The Grapeland Sandie Band is growing. The resurgence of the band started under the direction Perry Frank, continued under Becky Keisling and now the band director’s baton has been handed over to Moises Santos to continue the growth of the Wind Machine.

During the June 17 meeting of the Grapeland Independent School District Board of Trustees, the band director took center stage as he gave a brief presentation concerning the band’s growth and equipment needs.

“I hope that together, we can do a lot of great things for the band program,” Santos began. “The first thing I wanted to talk to you about was the current situations in the band program and kind of let you know what’s going on and list some needs.”

“Our seventh graders – there will be 34 students and in sixth grade there will be 41 students. We don’t have a tally on the fifth grade yet,” he said.

As he continued, Santos informed the trustees the band currently had 89 horns in its inventory “… which looks good except for two things – quantity and quality. We currently have 145 students and only 89 horns in total. As afar as quality, a lot of these horns are no longer serviceable or repairable by our current provider.”

Santos had provided each of the board members with a packet of information pertaining to the band instruments and pointed out that currently the district had 76.9% of its inventory which was no longer repairable or even serviceable.

“There are three reasons for this: age; lack of maintenance; and the students. We can’t control what the students do with the horns but we can control the maintenance and the age. To fix this, I have been talking to three local vendors,” he said.

The three vendors he spoke of were Tatum Music, Wessex Tubas and American Band Instrument Service (the district’s current instrument provider.) Santos highlighted both the pros and cons of each vendor and then provided five possible solutions to help attain the level of excellence he envisioned for the band.

He said the first solution would be outfitting the entire varsity band of 70 with their own horn. 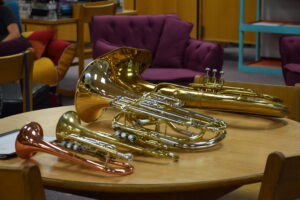 “Solution two focuses on using only Tatum. The reason why solution two is only Tatum is they do not repair any instrument they do not sell. Purchasing enough for the band would be $119,000,” the band director said.

“Solution three focuses on keeping American Band Service on the payroll, but only purchasing enough for whoever would be marching in the show, not the entire band,” Santos indicated.

As he continued, he explained he was providing two different totals when costing the instruments. One price contained the purchase of Sousaphones and the other did not because as he explained, the Sousaphone was the most expensive instrument to be purchased.

The Sousaphone is “… the marching variant of the tuba,” according to Santos.

He explained the price from American Band would be just over $82,000 with Sousaphones and approximately $66,000 without.

“Solution four is when we begin to see a variance. I started to calculate adding student series (instruments), professional (instruments) and advanced series together to try and decrease the price by stocking only those students who would be on the field. The price reduces to $77,588 or without Sousaphones, $61,788,” Santos reported.

“Those four are really high numbers,” he indicated, “which is why the last solution is the one where I did the most planning.”

Solution five involves keeping the price of each instrument the band director requested at or below $2,000, “… with the exception of instruments which already exceed $2,000.”

He added the fifth solution also allows for other purchases including music books. The current books are used through all grade levels.

As he concluded, Santos commented, “I know when kids see their board and administration backing them, that’s when they are willing to do their best work. If not, that’s when I can remind them how much effort your board put into this? Do you know how much the administration wants you to succeed? That is a driving force for this program.”