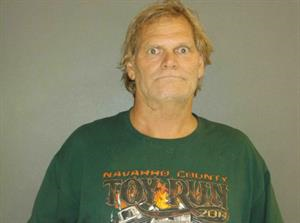 HOUSTON COUNTY – A Houston County man has been arrested and charged with two felonies after he allegedly committed a sexual offense with a child under 17 years of age.

Charles Elvis Easley, 60, with a listed Crockett address, was taken into custody on Thursday, June 6 and charged with one count of indecency with a child and one count of unlawful restraint.

According to an affidavit of probable cause, on Monday, June 3, Easley allegedly held a juvenile child against her will at a residence located on State Highway 21E.

While the juvenile victim was restrained, “… Easley then engaged in sexual contact with this juvenile child … for his personal sexual gratification,” the report stated.

The legal document further indicated the juvenile made an outcry to a family friend and later detailed the assault in forensic interviews.

A State Jail Felony is punishable by confinement in a state jail facility for a term of between 180 days and two years, in addition of a fine of up to $10,000.

Easley is being held at the Houston County Jail on bonds totaling $30,000.