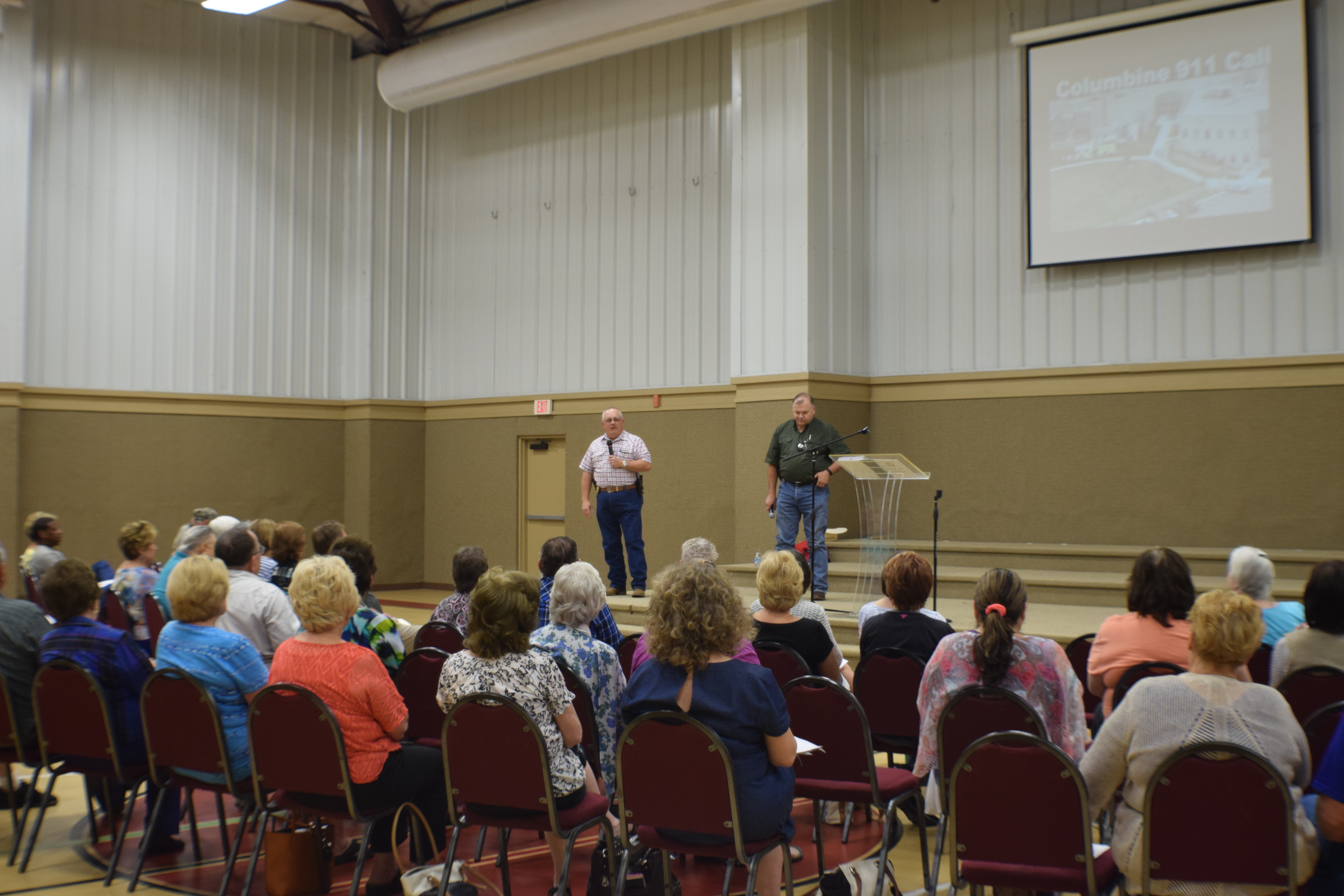 GRAPELAND – New phrases/terms come into the realm of public conscience on a daily basis. Most get about two minutes of air time and fade away while others stick around and become part of everyday vocabulary.

Unfortunately, one such term that has wormed its way into the daily lexicon is “active shooter.” Given the increased number of senseless, random incidents which have left hundreds, if not thousands dead, classes were developed by law enforcement officials on the best way to handle an active shooter.

Recognizing the police could not be everywhere at once, classes for the general public were also developed on the best forms of response to an active shooter. One of those classes was held on Thursday, Oct. 6 at the Fa 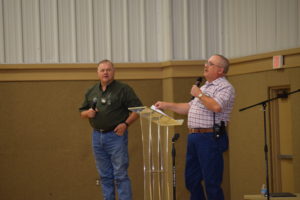 mily Life Center at the First Baptist Church of Grapeland.

The class was sponsored by the City of Grapeland and the Grapeland Chamber of Commerce. Houston County Fire Marshal Roger Dickey along with Houston County DA Investigator Randy Hargrove were the program instructors and were introduced by Grapeland Mayor Balis Dailey.

After the introductions, the fire marshal began the class and said, “Our country is becoming more and more violent. We have a lot going on in this world and I guess you can call it what it is. It’s terrorism. If you look that word up in the dictionary it means nothing more than fear. Hopefully in this presentation tonight, the main thing you can pick up is that we need to swing that pendulum back in our favor. We don’t have to be afraid. There are a lot of things we can do. It’s a mindset: I’m going home tonight, whatever that takes or whatever that looks like. We have to change the way we think and that is a habit we need to get into.”

Dickey added, “Wherever you are – anytime or anywhere – have a plan. Where is a second way out? Go through ‘what if’ drills. Have a plan.”

As the meeting continued, an audio recording of the first 911 call concerning the mass shooting in Columbine was played for the audience. Dickey said the way police were trained to respond to an active shooter changed after the murders at Columbine High School.

When the audio ended, Hargrove commented, “In all of these mass shootings, the shooter is not there to take hostages. He is there to inflict as much damage and take as many lives as he can. That is one thing you need to keep in mind.”

A video concerning a workplace related incident was also shown and at the conclusion, Dickey described three different ways a person could use to avoid becoming a victim. The first way was to avoid the attacker if at all possible. The second way was to deny the attacker access to an area by barricade or simply locking a door. The third way to avoid becoming a victim, Dickey explained, was to defend yourself.

An easy way to remember that is through the acronym ADD, with A for avoid, D for deny and D for defend.

The presenters changed gears somewhat and began to focus on the mental aspects surrounding an active shooter incident and discussed the three stages of disaster response. The first stage was denial, the second stage was de 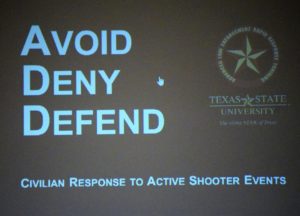 liberation and the third stage was the decisive moment when a person takes action.

Dickey and Hargrove also discussed the differences between what was called the human brain and the lizard brain. They indicated a human mind was composed of both with the human brain controlling reasoning, reflection and thinking. The lizard brain, on the other hand controlled the instinctual, or reflexive, side of a person with areas such as the fight, flight or freeze actions under its control.

Hargrove indicated the lizard brain could be trained through repetition and would allow a person to act appropriately when confronted with some type of disaster.

Following a break, the two hour class continued. The first topic addressed concerned what to look for in an active shooter. Dickey reported there was no distinct profile a person could look for, but added they may have some type of avenger mindset or they may have broadcast their intentions. Ultimately though, Dickey said an active shooter could be considered as an attempted mass murderer.

The presenters also provided statistics to the audience which revealed the number of mass shootings between 2000 and 2014 totaled 179 with the majority of the shootings carried out at a place of business or educational facility.

They also indicated the number of deaths in an active shooter incident were directly proportional to the time police arrival and target availability.