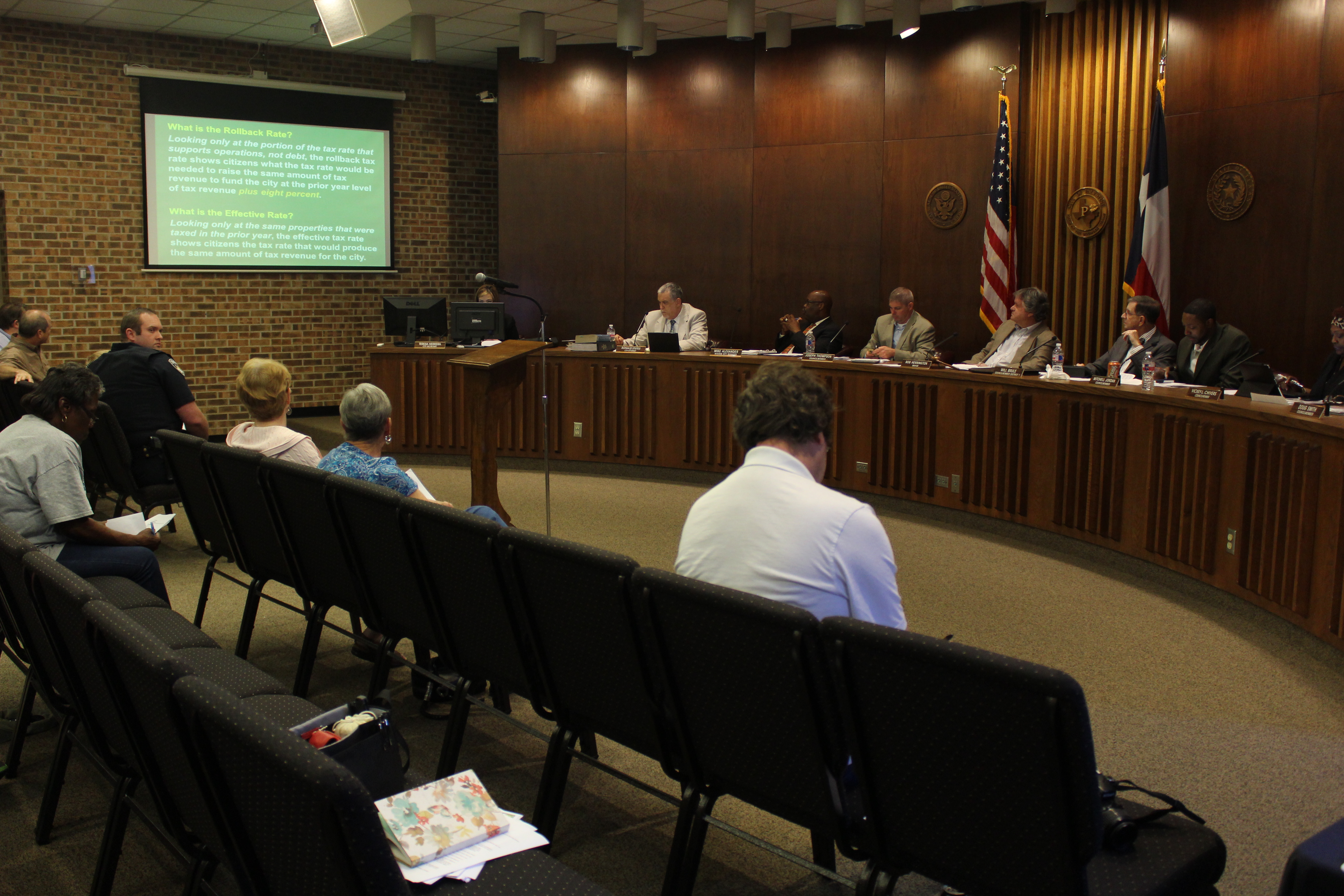 “We Want to Be Partners in Progress, Not Victims of Progress”
By Teresa Holloway
Messenger Reporter
PALESTINE – Residents along South Highway 19 aired a complaint before the Sept. 12 meeting of the Palestine City Council. Nine years ago, the area was annexed into the City of Palestine but no services have been received.
Chris Holcomb addressed the council. “My husband, Albert, and I own property at 3950 South Hwy 19 and nine years ago we were annexed into the city.
“We have not received any city services. No trash pickup, no water, no sewer, no lights, no fire, no police, no fire hydrants … we have no city services. So my request, and I have filed a petition, is that we be disannexed for failure to provide city services we need.
“All of the landowners in the area are in agreement with this and have signed the petition. We do comply with all the city ordinances. We have paid taxes for nine years, but we have not received any city services,” she said. “We submitted a petition, and would like to have this put on the agenda.”
Ben Rhone, owner of the new Rhone Funeral Home, joined the verbal petition. “I purchased this property last November; I haven’t been here nine years. I purchased the property within the city limits.
“However, as you all know, I’ve been here before to talk about getting variances on water and sewer. I do have that worked out. I feel it is not fair to pay full tax for the city services we are not receiving.
“I have had problems with the city as far as trash pickup … it took about two weeks to get that situated. They didn’t know it was inside the city.
“I’ve also had some issues with theft. During the building process I hadn’t developed that land but I built Rhone Real Estate, LLC, also known as Rhone Funeral Home, LLC.
“I had some theft during construction and had the police come out to make a report and they referred me to the Sheriff’s Department,” Rhone continued.
“I’d like to point out, according to Section 43.141 of the local government code, if the city fails to or refuses to provide services to this location, specified in Section 43.56 within 2.5 years, they are to take into consideration the disannexation. That’s what we are asking you all.
“Please put this on the agenda so we can get going with that,” he finished.
Michael Thomas spoke before the council on the annexation subject. “Mr. Mayor, City Council, I appreciate your letting me come and talk.
“Vicky, only you and Steve were here ten years ago when I was up here trying to stop the annexation in the first place. I can’t remember how you voted, but I think it was split.
“I was approached recently regarding this issue. If it’s legally possible, we’d like to be disannexed. Like Chris said, we really don’t have any city services out there. I have the original annexation plan here from file.
“Technically, I know you can find ways to say, ‘No, you’re in …’, and that’s fine, as long as we can get some services out there.
“I really want to be partners in progress, not a victim of progress,” he said. “I’m a part of Palestine and I enjoy Palestine.
“Palestine has gotten along for 160 years without us out there, that’s was my argument the first time … Just say no.”
Thomas explained the city council members, himself and various other businesses contributed to the building and economy of Palestine, but the residents along the contended stretch of highway were not receiving any benefit of the taxes paid in.
“I’ve never gotten mad about this, I’ve paid my city taxes all these years. But it’s been ten years since this all got started and not a single thing has changed out there.
“Not a single solitary thing has changed other than we’ve paid taxes for ten years. Thomas explained the documentation promises the same services, at the same rate the rest of the citizens of Palestine receive them.
“We will get there sooner or later. What I said at the beginning is what I say right now. Why didn’t you come to me at the time … I believe you should give us a period of time and let us build up our properties, watch the businesses grow, and then when you think there’s enough money out of us in sewer and water and taxes then go out there and take people in.
“We weren’t given that time. We were just told, ‘Welcome to the city, you’re going to like it,’” he said.
“I like it, I’m happy with the city. We started this petition because all the landowners out there are in agreement. We want to be disannexed if we can’t get city services out there.
“You collect all our property tax money and later on you’ll have enough money to provide services. On the other side of that is, why don’t you provide services in an area to attract people to the city?”
“There is a report that says more than 50 percent of the land inside the corporate city limits of Palestine is undeveloped. I would prefer you develop that property and get people to come build their places there, give them tax incentives or whatever, before you come out there and grab us. We’ve done nothing,” Thomas said.
terholloway@hotmail.com