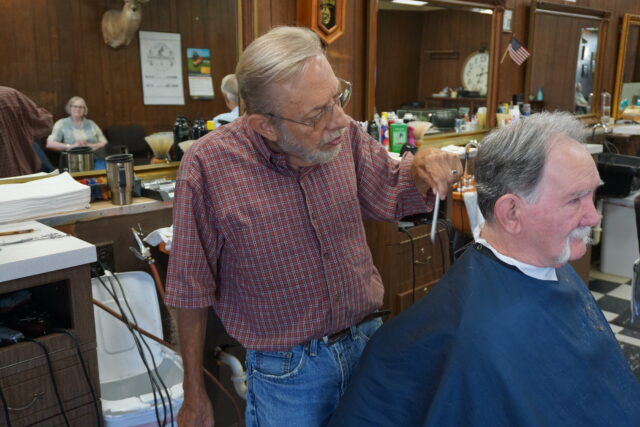 CROCKETT – For the men of Houston County, the barbershop in downtown Crockett is a part of life. Walking inside, you go back a little in time to simpler days. People know you, know what haircut you like. The men joke and catch up and they wait patiently for their turn.

The customers grumble about the hay this year and some of the politics in the country. The chairs, as old as some of the customers, remind one more of a film set in the 1950’s than something still adoring Crockett.

All the haircuts, small talk and gossip one needs to fill fresh and handsome – and caught up on the word on the street in Houston County. This reporter was warned to get the story straight – not like that fake news in the big cities.

One barber in particular has been working downtown for 25 years. He is as part of the old barbershop as the well-worn chairs and old radio playing country music in the corner.

Barber Jim Hudson has been a barber for 60 years. A few quick calculations showed that he has done somewhere north of 312,000 haircuts in all that time. When presented with that figure, Hudson remarked, “That’s a lot of haircuts!” It’s probably a lot of sweeping hair, too.

Hudson was born in Indiana and as he was ready to graduate high school, he decided college was not for him and went instead to barber school. That was way back in 1962. Haircuts back then cost only a dollar. Hudson said it’s not just the price that has changed.

“Of course when I started, everyone wore a flat-top. Then came the long hair. That’s when business really got bad. The 60’s weren’t good for business. In fact at that time I had take a part time job just to make ends meet.”

He and his wife traveled often to Houston to visit family and eventually began to spend their vacations on Houston County Lake. They had talked about selling their home up north and moving to the Crockett area, but didn’t know what they would do once they got here.

“We were on vacation and I needed a haircut,” Hudson recalled. “I came in and the owner at the time cut my hair. I told him I was a barber in Indiana. And he said, ‘You want a job?’ I told him that if I decide to move here I will be looking for one. He said, ‘You’ve already got one!’ And that’s how it happened. Been here 25 years.”

“I love it here. I don’t have to shovel snow!” Hudson laughed. “It’s just nice here, and the people are nice and friendly. I am from a small town. I like small towns. I don’t like the city life at all.”

Asked the strangest haircut request he can remember from all those years, Hudson said he had some strange requests this year.

“In one week I had two different guys – 85 years old  and who live in this area – both come in and ask for a mohawk. Just this past summer,” Hudson said.

At the downtown barber shop, they still cut hair the old fashioned way. Sideburns are still shaped and cut with a razor and hot cream. Hudson said he will continue to work as long as he can. For Hudson, the job is also an excuse to get out of the house and see his customers – and friends.

“That’s what you have to do,” Hudson said. “You have to have a reason to get up every day. And this isn’t physically that hard. If it was, I couldn’t do it. It’s harder for me now to do work around the house that I have always done. It takes me longer to do it now. After all these years as a barber I would rather stand than sit. If I sit, my back hurts!”

For more information you can visit their website at

COVID-19 Cases Drop in Texas
Grapeland Hospital District to Meet
CISD Ring of Honor Nominations Being Accepted
Please follow and like us: