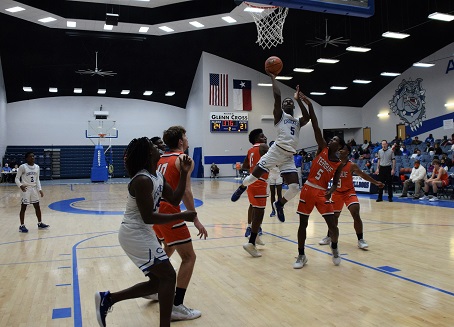 CROCKETT – It’s crunch time in District 20-3A and the Crockett Bulldogs are battling it out for the second seed with the Fairfield Eagles. One slip-up can mean the difference between playing the third seed out of District 9-3A – probably the Rogers Eagles – or the second seed, the Cameron Yoe Yoemen.

While the Bulldogs have already clinched a playoff berth, the Teague Lions are locked in a battle for the fourth and final seed with the Buffalo Bison, as well as the Groesbeck Goats.

Given that backdrop, the Lions traveled to Crockett on Tuesday evening for contest with huge playoff implications for both teams. Crockett had dominated Teague in their first contest, but the Lions came out and showed they were not just going to roll over for the Bulldogs in their second matchup.

A cold-shooting second quarter, however, did in Teague as Crockett held on for a 52-45 win.

The Lions jumped out ahead of the Bulldogs in the first quarter as they opened the game with an 8-2 run. It was Senior Night in Crockett and by the end of the quarter, the home team had cut the lead to 17-15.

Jayden Collins kept the Bulldogs in the game early on with nine first quarter points. Courtney Byrd, Keshun Easterling and DJ Walker added two apiece to close out the scoring in the early going.

Jacob Callahan and Nemier Herod paced the Lions with five points apiece in the opening eight minutes of the game. Wayland Allison connected from behind the arc while Aidan Allen and Xavier Harvey dropped in two apiece to round out the scoring in the first period.

The Crockett defense tightened up dramatically in the second as they limited Teague to only four points in the quarter on two each from Tylin Randle and Jehmel Rice.

The Lions’ shooting woes allowed the Bulldogs to take the lead at the 6:28 mark of the second on a bucket from Byrd who had three points in the quarter. Walker started warming up with six points while Collins and Easterling both had two as Crockett took a 28-21 lead into the locker room at halftime.

Following the break, Teague ran off seven straight points to tie the game at 28 with five minutes left in the third and then took the lead 30 seconds later.

The Bulldogs didn’t score their first point of the second half until Byrd converted one of two from the line at the 3:41 mark. On Crockett’s next possession, Byrd was fouled as he went up for a shot. He knocked down both free throws to reclaim the lead for the Bulldogs and when Tayshawn Simon hit back-to-back layups, Crockett was up 35-30 on their way to a 37-32 lead at the end of three.

Herod poured in six for the Lions while Rice added five to account for the Teague points in the third period.

Teague cut the lead to three at the start of the fourth but a three-pointer from Collins pushed the lead out to six and gave Crockett the cushion it would need to hold for the 52-45 win.

Collins put in five points in the final period of play for the Bulldogs while both Byrd and Jalen Patton had four apiece. Zandric Anderson added a basket to close out the Crockett scoring in the fourth.

On the game, Teague was led in scoring by Nemier Herod with 14 points while both Jacob Callahan and Jehmel Rice netted nine apiece. Wayland Allison had five, Aidan Allen had four and Xavier Harvey, along with Tylin Randle, had two apiece to close out the Lions’ point production.

The Bulldogs were led in scoring by Jayden Collins with a game-high 18 points. Courtney Byrd was also in double-figures with 12 while Delvin Walker went for eight. A trio of Crockett players – Keshun Easterling, Jalen Patton and Tayshawn Simon – all had four while Zandric Anderson closed out the Crockett scoring with two.