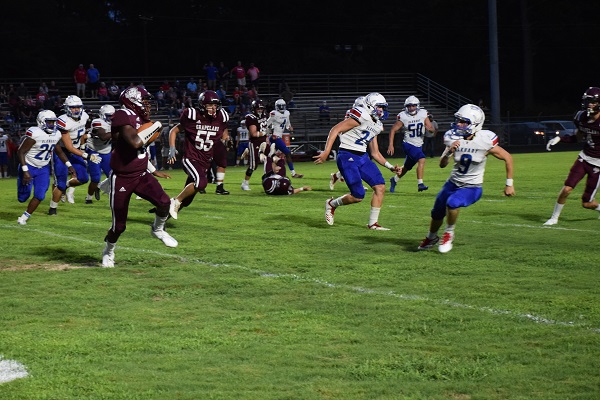 GRAPELAND – The Grapeland Sandies welcomed the Elkhart Elks to town on Friday in the renewal of a rivalry which had been put on hold for several years. And just like any good rivalry, the contest lived up to its hype.

With the game still up in the air with less than 1:30 remaining, the Sandies faced a third and long from the Elkhart 29. Convert and the game is over. Fail to pick it up and the Elks still have a chance.

At the snap, Grapeland QB BJ Lamb dropped back to pass and found Keizion Ashford who made a leaping catch at the two-yard-line to give Grapeland a first down. On the next play, Cadarian Wiley bulled his way over for the clenching score. Cooper Ward converted the two-point conversion and the Sandies walked off the field with a 40-29 win.

Almost four hours earlier – as the game got underway – the Elks looked like they were ready for the high-powered Sandie offense and held them to a three-and-out on Grapeland’s first possession.

Starting at their own 21, Elkhart moved down to the Grapeland 24 on two plays. First, Chase Walker picked up eight on a dive play and then Messiah Birdow took the handoff on a reverse and motored 47 yards down to the Sandies’ 24.

Cale Starr picked up seven on first down, but Walker lost two on second. The Sandies helped out the Elks with an offsides call to give Elkhart a first and 10 at the 14. Following an Elkhart timeout, Landon Thomas found a crease in the Grapeland D and slipped into the end zone for the game’s first score.

Starr tacked on the extra point and with 7:31 left in the first quarter, the Elks led 7-0.

The Sandies next possession started at their own 28. Wiley picked up eight on first down and then Lamb worked his way across midfield for 23 yards on third-and-two.

Grapeland moved inside the Elkhart 40 on Wiley’s eight-yard run but an incompletion and a false start pushed the ball back to the 43. Lamb and Ashford hooked up for seven, but Wiley could only pick up five on a third-and-eight.

The Elks returned the offsides favor from earlier and added a pass interference call for good measure to set up the Sandies with first-and-10 at the Elkhart 14. After Wiley picked up a yard on first down, Lamb threaded the needle to Ashford for a 13-yard TD to make the score 7-6, with two minutes left in the quarter.

The two point attempt was no good and after the kickoff, Elkhart took possession of the ball at their own 17. Unfortunately, the game was then delayed by lightning for the better part of an hour.

Once the lightning passed, the Grapeland D came back onto the field with a new found determination, held the Elks and forced a punt.

Grapeland took over at their own 41. After two plays gained zero yards, Lamb picked up 22 down to the 19. Wiley pounded the ball inside the 10 and after offsetting penalties, he worked his way down to the one. Lamb took it the rest of the way for six and when the QB found Ashford in the end zone on the two-point conversion, the Sandies led 14-7 with 9:43 left in the first half.

The Elks, however, showed they were not going away anytime soon. Starting at their own 46, Elkhart drove the ball right down the middle of the field as Walker, Wesley Hubert and Taylor Stafford marched the ball down to the Grapeland five. From there, Starr took it across the goal line for six and then added the PAT to tie the game at 14 with 2:56 left in the half.

That left Ashford and the Sandies just enough time to add one more score before the half. On the kick, Ashford made a great return out to the Elkhart 48. On first down, Lamb connected with him for another 23 yards.

After Wiley was held to a one-yard gain, Lamb hit Ashford on a swing pass and the senior receiver bulled his way for 10 more. If All-State voting was held after Week Two, the effort shown by Ashford on the Sandies’ final possession of the half, would put him at the top of the list.

A clipping call pushed the Sandies outside the 20, but a second interference call gave Grapeland a first down at the 11. From there, Lamb hit Cooper Sheridan for nine and then with 23 seconds left in the half, Ashford took a handoff and burst into the end zone to give Grapeland a 20-14 halftime lead.

Following a short halftime, the Elks opened the second half with possession of the ball at their own 47.  On first down, Hubert picked up five. Then, on second down, Birdow got behind the defense and Starr hit him in stride for a 48-yard scoring strike. Starr knocked home the PAT and just like that, the Elks led 21-20.

It seemed as if momentum had switched sides and was now with Elkhart. On the Sandies next possession, Lamb was picked off. The Elks were unable to do anything with the ball and gave it right back to the Sandies.

Grapeland still appeared shocked and found themselves facing a fourth-and-11 at their own 29. Ashford dropped back to punt and that was when the momentum jumped back to the home side of the field. On the kick, the Elkhart defenders ran into Ashford and were called for roughing the kicker.

The penalty gave the Sandies a first down at their own 43. Lakerian Smith picked up 22 on first down and added another four on the next play. Lamb added 11, Smith slammed his way for eight more and then Ashford, who left the game after the roughing call, walked into the end zone from 12 yards out to put Grapeland back on top 26-21.

The Grapeland D held the Elks in check on Elkhart’s next possession and forced a punt as the third quarter came to a close.

As the fourth quarter got underway, Lamb connected with Riley Murchison for a 26-yard TD at the 10:59 mark of the fourth.

The Elks would make it close as they pulled to within 32-29, but that was as close as they would get thanks to Ashford’s clutch reception down the stretch as the Sandies won, 40-29.

Wiley picked up 114 yards on 18 carries and scored a TD, while Ashford carried the ball for 22 yards and two scores.

Ashford also had eight receptions for 110 yards and one TD. Michael Dancer had one reception for 35 yards and Murchison caught one for 24 and a TD.