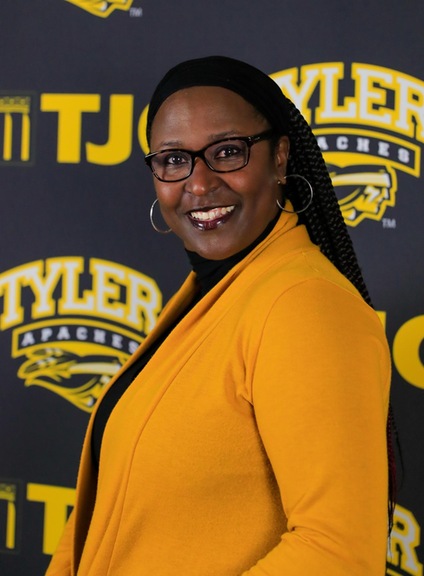 GRAPELAND – There have been some great basketball teams in Grapeland High School History. In recent years, both the Sandies and Sandiettes have played for the Class 2A State Championship only to suffer painful losses in the closing minutes.

Ask any team that’s won a title and the players will tell you the same thing – it’s hard to win the championship. First, you need talent, but you also need a lot of luck The Sandies won the title back in 1985 and in 1989, the Sandiettes followed suit. Despite some great teams coming out of the Queen City of the Sand Flats, those are the only two who have brought the gold back home to Grapeland.

One of the leaders on that 1985 Sandies’ team was Calvin Tillis and he had a kid sister named Trenia who took the world of girls’ basketball by storm when she reached the high school level.

Trenia was a four-year starter at Grapeland High School and for the first three years, she played for Hall-of-Fame Coach Don Tullos. In her senior year, Trenia was coached by Chuck Bailey.

She led the Sandiettes to back-to-back state tournament appearances in 1987-88 and 1988-89, winning the championship in 1989. Trenia averaged 25 points and 16 rebounds per game as a freshman, 29 points and 18 rebounds as a sophomore, 35 points and 15 rebounds as a junior, and 27 points and 12 rebounds as a senior. She was a four-time All-State selection and was named Miss Texas Basketball in 1989.

In addition, during the University Interscholastic League’s 100th year celebration, she was recognized as one of the top 100 girls high school basketball players in the state of Texas.

After a stellar college career at SFA where she was inducted into the Lumberjack Hall of Fame, Trenia Tillis (now Tillis-Hoard) launched a coaching career and has been the head coach of the Tyler Junior College Lady Apaches for 22 years.

You might think that was enough for one year but you would be wrong. While one of her favorite sayings concerning her team is, ‘We just need a pound cake with no icing,’ there was icing a-plenty last week when it was announced Trenia would be inducted into the Texas High School Basketball Hall of Fame as part of the Class of 2023.

In a press release from the Texas Association of Basketball Coaches, it was announced, “The Texas High School Basketball Hall of Fame will grow by eight with the addition of the Class of 2023. The class, which was announced today by the TABC, will be inducted during a banquet May 20, 2023, as part of the annual TABC Clinic.”

The media release continued, “The incoming class of legends includes players, coaches and influential contributors that left their mark on prep basketball in the Lone Star State. The new coach members include Chuck Darden, Larry Goad and Nancy Walling. Player inductees are Larry Davis, Keith Edmonson. Larry Spruiell and Trenia Tillis-Hoard. Rounding out the class is Jim Forbes for his efforts as a player, coach and contributor.”

“One word can easily describe the eight men and women in the Class of 2023 – excellence,” said TABC Director Rick Shirley. “The class includes prolific players that excelled at scoring and coaches that won and were great mentors to their players. The class also recognizes efforts that have helped to grow the game of basketball not only within Texas, but throughout the United States.”

Congratulations Trenia on your long overdue selection as an inductee to the Texas High School Basketball Hall of Fame, the Class of 2023.