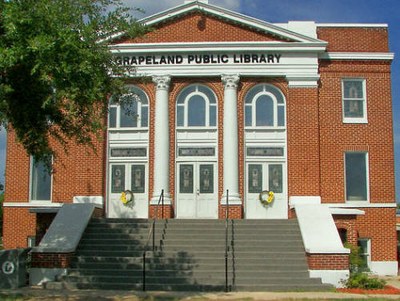 By Teresa Holloway
Messenger Reporter
GRAPELAND – In the small town of Grapeland, the name ‘Pridgen’ is synonymous with the iconic library situated in the heart of the town.
Brent Pridgen began the library with two missions, rescue the old First United Methodist Church and establish a book repository for the community.
The library’s website states Brent Pridgen felt “every town should have a library”, and he set out to make that happen. The elder Pridgen guided the efforts to fund the establishment of both the library and the Pridgen Foundation which supports the same.
Though Brent passed away in 2004, his heirs have faithfully abided by his dream and Grapeland soon realized the reality of this iconic, magnificent building and the treasure of books contained within.
He continues to inspire, according to Bob and Harry Pridgen and the multitude of volunteers, staff and donors who work hard to usher the library into perpetuity.
Retaining the charm and ambiance of the historic old building, both inside and out, were main goals for the family.
Custom built shelving, restored original hardwood floors, beautiful stained glass and vaulted ceilings leave no doubt of the library’s church heritage.
It’s a family thing, and Bob Pridgen can remember attending church in the building before it was reconstructed. “I grew up in this church,” he said.
“About the end of the 1990s, the FUMC decided they wanted a new worship building. They built the new church out on the bypass.
“The old building was just standing there. So Brent saw it, and he wanted it. He was always doing some kind of project,” Bob smiled.
“He said, ‘I want to make a library out of it.’” he said of Brent’s early plan. “I think he paid $10,000 for it. That’s the cheap part,” he said. “They stripped it out, and remodeled it, got it all set up. Then he passed away in an untimely fashion,” he said.
“His mother, Francis, kept it going for years. She stayed on the board as long as she could. Harry Wayne (Pridgen) promised her he would keep the library open and he has,” Bob continued.
Harry Pridgen has maintained the library for years and credits all the help from family and community for the success it is.
“When I moved back in 2011, I knew I might be involved in the deal as a Pridgen,” Bob said. “I’m the Vice President of the Board and I’m a volunteer. I’ve been here since I came back.
“This facility is very useful for a lot of things,” he said.
Before his return, Bob Pridgen attended Stephen F. Austin and got degrees in biology and science. He traveled extensively before he returned home. “I was out of the loop for a long time. I came back to help my mother.”
Bob, like many of the Pridgen family, grew up in the Grapeland area. “We didn’t have the internet, but we had Encyclopedia Brittanica,” he said with a gleam in his eye. “I could find all kind of things to get in trouble with just with the encyclopedias – reading about things I shouldn’t be doing …” he laughed.
“I had a little workshop in my room. I had a work bench in there. They called my bedroom the North Bedroom. Mom and Dad were worried about me blowing the house up or something,” he said.
“One time, I got this bright idea to make a balloon. I wanted to take a light and put on this balloon … I thought well, we have natural gas. The encyclopedia said that’s lighter than air …” Bob paused.
“I went down to the dry cleaner, a man named Wilhite Kennedy that ran the dry cleaner then. He gave me about 50 plastic bags. I went home and I tied them off to the gas nozzle. I filled them up and tied them off.
“I filled up 20 of them and put them out in the barn. Then I got to thinking again. My uncle worked for the railroad, so I got a flare from him.
“I got to thinking, this flare is either going to set the balloons off or burn the string. I needed a wire, so I got a leader of wire for this thing.
“I took it out in the barn and tested it, but it wouldn’t pick up the flare, so I cut the flare in half,” he said. “When I got it all set up, I took it out to the pasture one evening, way down in the south end of the pasture. I took a propane torch and lit that flare.
“I got it going good and I let it go. It was going up like this,” Bob indicated just about a foot off the ground. “It was going across the pasture, I’m looking at the barn thinking…but it cleared the barn by about a foot.
“Then it went way, way up and it was just spectacular,” he grinned. “It didn’t set anything off and it didn’t burn the barn.
“When a flare burns, the composition makes it drip and you could see that. One of my friend’s mothers talked a lot about UFOs and stuff. I called her and told her to look out the window and check.
“It eventually burned out and it didn’t set the National Forest on fire, so it all worked out. But boy, you’d be hung these days for something like that!” he laughed.
Bob modestly admitted to being a good student in school. “My mom did well in school and I guess I got that from her. It was really important to me to make good grades.”
Bob attended Grapeland schools his entire childhood and after years of working and roaming the countryside, he’s back home and working shoulder to shoulder with family and friends in the Grapeland Library.
terholloway@hotmail.com